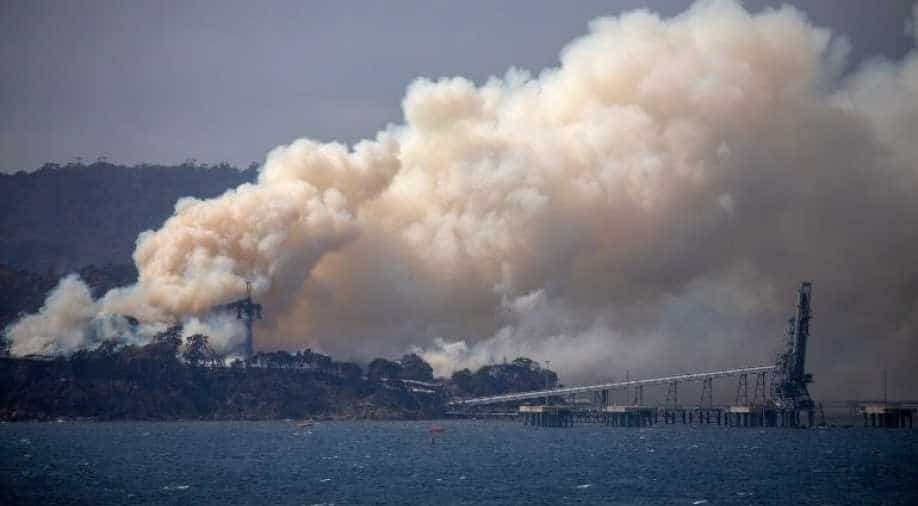 Smoke rises from the Eden Woodchip Mill, from a fire that has been blazing for days, after bushfires came close the previous week to Eden, Australia. Photograph:( Reuters )

A strong southerly wind change on Friday night, with gusts of more than 100 kph (60 mph) recorded, whipped a number of fires up to the emergency warning level, but by Saturday morning cooler temperatures and rainfall had eased conditions.

Bushfire conditions on Australia's east coast eased on Saturday after a tough night for firefighters, and authorities said they expect to have at least a week of milder weather where they can improve defences against the huge blazes still burning.

A strong southerly wind change on Friday night, with gusts of more than 100 kph (60 mph) recorded, whipped a number of fires up to the emergency warning level, but by Saturday morning cooler temperatures and rainfall had eased conditions.

"A lot of relief for a lot of communities really suffering at this time, but the next few days are (also) looking pretty good," Jonathan How from the Bureau of Meteorology told ABC News television. "Much cooler as well."

New South Wales (NSW) Rural Fire Service Commissioner Shane Fitzsimmons told a media briefing the respite was an opportunity to consolidate and try and get the upper hand on the fires.

"It would appear that we have got at least a week. It will probably be the best seven days we have had without a rise of very dangerous fire ratings," Fitzsimmons said.

Victoria emergency services minister Lisa Neville urged communities affected by the fires to use the expected milder weather conditions to check on each other.

"This will leave significant trauma for people to deal with," Neville said at a separate media briefing. "The next few weeks is going to be really important that we look out for each other."

Neville also took on twitter and said that she met with emergency services from France, the UK and the USA to discuss how they can assist with our current bushfires.

Today I met with emergency services from France, the UK & the USA to discuss how they can assist us with our current bushfires.

Another great example of our emergency services working together to protect our communities. Thank you to all the ES workers, local and international pic.twitter.com/SqRiHUFy4J

Since October, 27 people have been killed and thousands subjected to repeat evacuations as huge and unpredictable fires scorched more than 10.3 million hectares (25.5 million acres) of land, an area roughly the size of South Korea.

Australian authorities were clear that the risk was far from over.

"The longer-term forecast, or the outlook rather than a forecast, is for warmer and drier, so we know we have a long way to go," Victoria's emergency management commissioner Andrew Crisp told a media briefing.

"It is great to have some respite now so we can reset and refocus in terms of our operational activities and what we can do to support community, but we will have more hot weather."

Across NSW, nearly 150 fires were still burning as of Saturday morning, more than 60 of which were not contained, but none were at emergency level. Some 2,000 homes have been destroyed so far in the fire-affected areas of the state.

One NSW person suffered serious burns defending a property and was taken to a Sydney hospital on Friday night.

One fire was still burning at emergency level in Victoria on Saturday from a total of about 20 fires burning in the state. 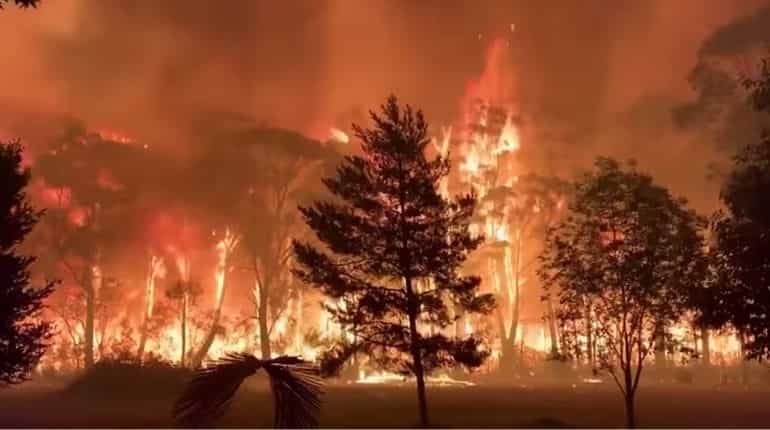 A number of fires burning in the Snowy Mountains region in NSW and across into Victoria have merged. The fires that combined have more than 600,000 hectares (1.5 million acres) of land in total. Although the merged fires are burning in a difficult area to get to, authorities said they do not pose an immediate threat.

Thousands of Australians took to the streets on Friday to protest against government inaction on climate change, and were supported by protesters in London.

Westpac estimated total bushfire losses to date at about A$5 billion (£2.64 billion) ($3.4 billion), higher than the 2009 bushfires in Victoria but smaller than the Queensland floods in 2010/11. It forecast a hit of 0.2 per cent to 0.5 per cent on gross domestic product.

The Insurance Council of Australia increased its estimate of damages claims from the fires to more than A$900 million, with claims expected to jump further.

Australia's wildfires have dwarfed other recent catastrophic blazes, with its burnt terrain more than twice the extent of that ravaged by 2019 fires in Brazil, California and Indonesia combined.

The $2 billion we've committed is in addition to the Government’s emergency and disaster payments, and the financial support for volunteer firefighters. People affected by the bushfires can claim disaster payments by calling 180 22 66.

About 100 firefighters from the United States and Canada are helping, with another 140 expected in coming weeks.

Smoke has drifted across the Pacific, affecting cities in South America, and may have reached the Antarctic, the UN's World Meteorological Organization said.