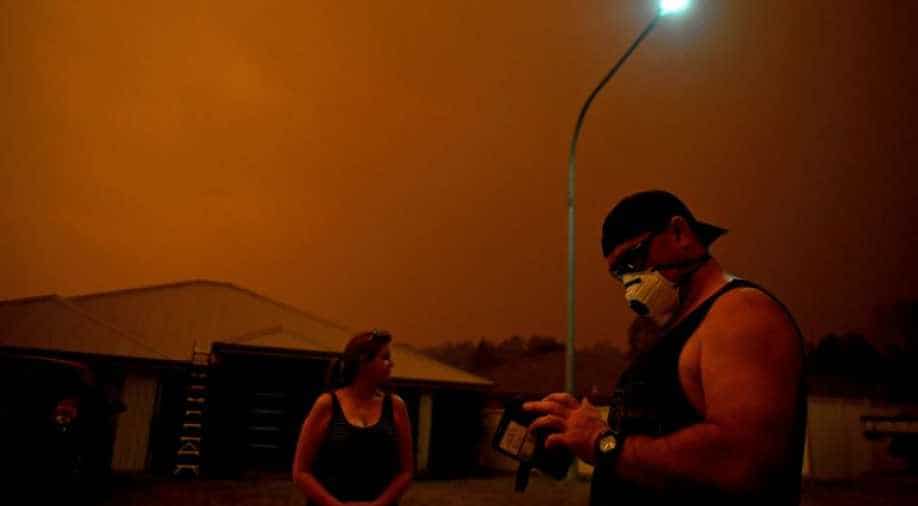 Locals use phone apps to get updates on the fire and to anticipate its movements as high winds push smoke and ash from the Currowan Fire towards Nowra, New South Wales, Australia January 4, 2020. Photograph:( Reuters )

There has been increasing anger over the devastating wildfires that are raging since weeks now.

Amid the raging bushfires in Australia, thousands of protesters marched on Friday to call on the government to take measures to tackle global warming.

The protesters also asked for the government to cut back on fossil fuels.

There has been increasing anger over the devastating wildfires that are raging since weeks now. The fires have killed at least 26 people and over 2,000 homes have been destroyed.

Some Australians accuse the country's Prime Minister Scott Morrison's government of failing to act on climate change and supporting coal mining that has contributed to global warming.

Demonstrators marched with signs reading "change the politics not the climate" and "trust the science". They also called for Morrison to step down.

The severe fire conditions have been fuelled by a prolonged drought and worsened by climate change, with experts warning that such massive blazes were becoming more frequent and intense.

Australia experienced its driest and hottest year on record in 2019, with its highest average maximum temperature of 41.9 degrees Celsius (107.4 degrees Fahrenheit) recorded in mid-December.

The country is one of the world's worst per capita greenhouse gas polluters, due to heavy use of coal-fired power and a relatively small population of around 25 million.