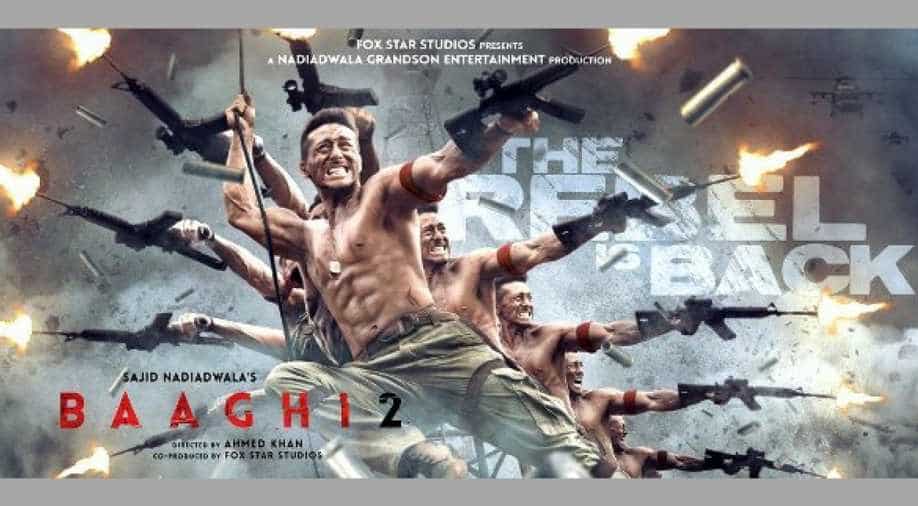 For those who are awaiting the release of Tiger Shroff starrer Baaghi 2 who has been paired opposite his real-life partner Disha Patani in the film, there is more stuff on the internet to hold onto.

After releasing an action-packed trailer that sees Tiger Shroff fighting goons left, right and centre while jumping off heights and somersaulting on February 21, makers have now released a new poster of the movie.

With guns blazing in a 360-degree view shot, Tiger with his bare-chested ripped body looks like a proper rebel, who everyone fighting him must watch out for! We say that as there is not one but ten Tiger Shroffs in the frame, almost like a video captured frame by frame and put together as a picture.

Tiger had earlier shared the first poster of the film on January 4 and wrote: "Get ready To fight guys as rebels for love are all geared up to arrive soon! Sajid Nadiadwala's Baaghi 2 to release on March 30 2018."

Baaghi 2 is directed by Ahmed Khan and Tiger Shroff plays an army officer – Ronnie who goes on a mission to rescue his ex-lover’s kidnapped child. Neha (Disha Patani) feels he is the only person who can help her in the current situation. The army man goes deep into Goa and battles against the powerful drug lords and Russian henchmen to find the missing child.

The film will hit theatres on March 30.