The Modi experiment has been accepted: Amit Shah in joint press conference with PM Modi 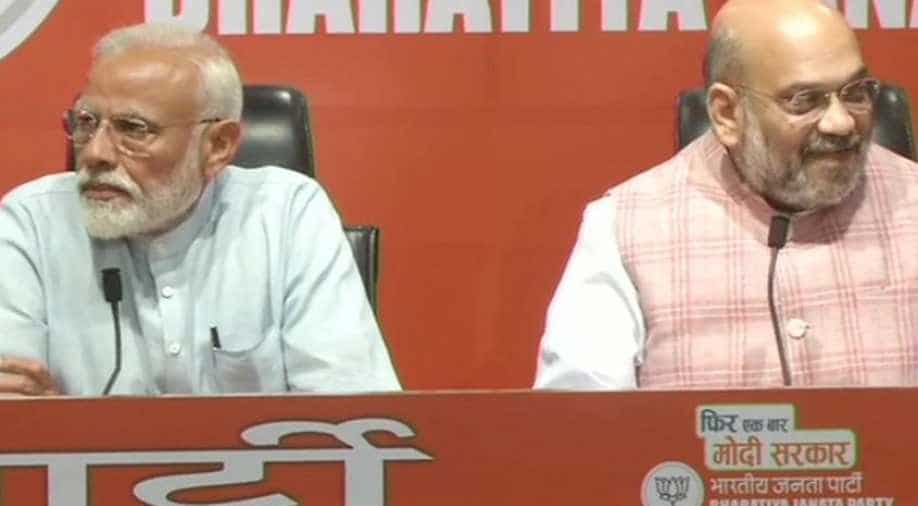 Addressing the press conference, BJP president Amit Shah said the party ran the most extensive campaign in its history. Amit Shah declared that the party will form the government once again. Photograph:( ANI )

'It was the first election when inflation and corruption was not an election issue,' Shah said.

As the long and torrid election campaign came to an end on Friday, BJP president Amit Shah and PM Modi addressed a press conference at the party headquarters in New Delhi.

Addressing the press conference, BJP president Amit Shah said the party ran the most extensive campaign in its history. Amit Shah declared that the party will form the government once again.

I got a sense that a majority government will come to power again: PM Modi in joint press conference with Amit Shah

"The Modi experiment has been accepted," Amit Shah said, adding, "I guarantee that BJP, under Narendra Modi's leadership, is going to form the next government." "133 schemes were launched," he said.

BJP President Amit Shah: We started our election campaign from January 16...Our target was to win 120 Lok Sabha seats which we couldn't win the last time. We are confident that we'll receive good results pic.twitter.com/P80DRk8Tqz

"People have understood that multi-party democratic system can take the country forward on the path of developments, the success of 133 schemes proves it," the BJP president asserted.

"It was the first election when inflation and corruption were not the election issues," he said.

"The 125 crore people of India are not worried about the country's security today because of PM Modi," Shah said.

"The government has successfully launched many schemes for farmers, Dalits and women." "Our economy made strides in all the 5 years, and this is laudable," he added.

"During the last five years, India's economy jumped to the 6th spot from 11th position," he said.

"Our focus was on strengthening the BJP as an organisation. Political maturity will help us make gains in 80 of the 120 seats," Amit Shah said.

"The government focussed on farmers and women," he said.

"Main Bhi Chowkidar" campaign was a success in the country, it actually came from the people," Shah stated.

"15,682 in 161 BJP call centres connected with the people and made our campaign a success," he said.

The press briefing came shortly after the campaigning for the Lok Sabha polls officially ended on Friday.

The last leg of the seven-phased Lok Sabha polls is scheduled for May 19.

Around 59 constituencies spread over seven states and one union territory will go to polls on Sunday.

The counting of votes will take place on May 23, results will be announced the same day.