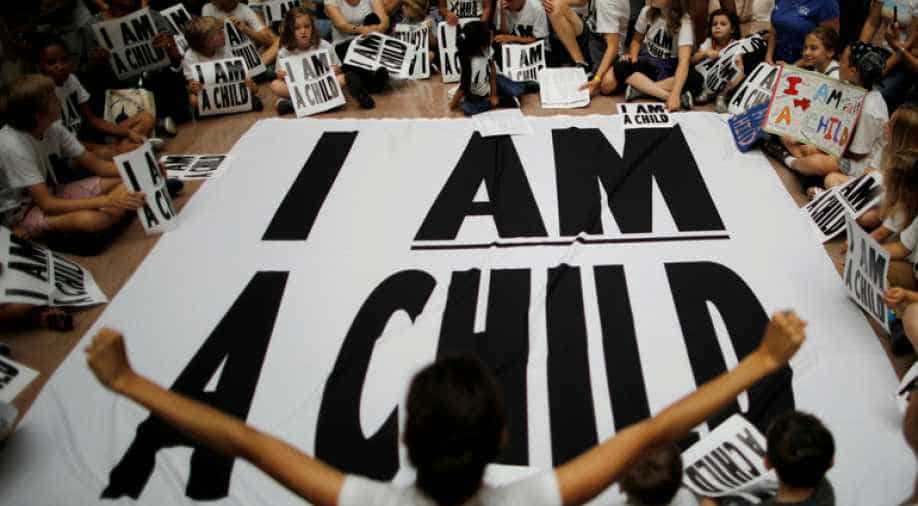 Children, family members take part in a sit-in following a march to mark the court-ordered deadline for the Trump Administration to reunify thousands of families separated at the border, in Washington.(File photo) Photograph:( Reuters )

A senior Border Patrol official said Friday that the numbers continue to increase: some 6,000 undocumented migrants were caught on Thursday trying to enter the country

A nine-year-old Mexican child died while trying to cross the Rio Grande River into the United States, the Border Patrol said Friday amid a surge in migrants seeking to enter the country.

The child was found together with a Guatemalan woman and her three-year-old, all unconscious and stranded on an island in the middle of the river which demarcates the US-Mexico border in Texas on March 20.

"Agents found the individuals and immediately began administering first aid while transporting the migrants to shore," the Border Patrol said in a statement that did not state the deceased child's gender.

The woman and the three-year-old regained consciousness but the nine-year-old could not be revived.

Also read | Lack of sanitation and social distancing: How immigrants in America are struggling

The three, who were not identified, were some of the 500 migrants rescued from dangerous situations in the past five months as thousands attempt to cross the border every day.

A senior Border Patrol official said Friday that the numbers continue to increase: some 6,000 undocumented migrants were caught on Thursday trying to enter the country.

Unlike in the past, when most of those caught crossing the southern border illegally were single adults, most recently about half have been either in family units or as unaccompanied children.

Most are being sent back into Mexico but all of the unaccompanied children and a number of the families are being allowed to stay in the United States.

Holding and processing facilities for the children at both the US Customs and Border Protection (CBP) and Department of Health and Human Services (HHS) are packed far beyond capacity.

On Wednesday the CBP was holding 5,156 migrant minors while HHS, which takes them from CBP and tries to place them with family members in the United States, had 11,900.

In February more than 9,000 unaccompanied children, mostly from Mexico and Central American, came in, and that number appears on track to top 14,000 this month.

"We are apprehending more people than we are discharging," the official, who declined to be identified, told reporters.

On Thursday President Joe Biden defended his handling of the increase in migrants, which has become his largest political liability two months into his adminsitration, after predecessor Donald Trump sought to seal off the border.

Biden called the surge seasonal, because it was the safest time to travel, and said the children were being accepted in for humane reasons.

The Border Patrol official said they expect the surge to continue at least through April.

"I fully expect the numbers to increase into the summer months," he said.