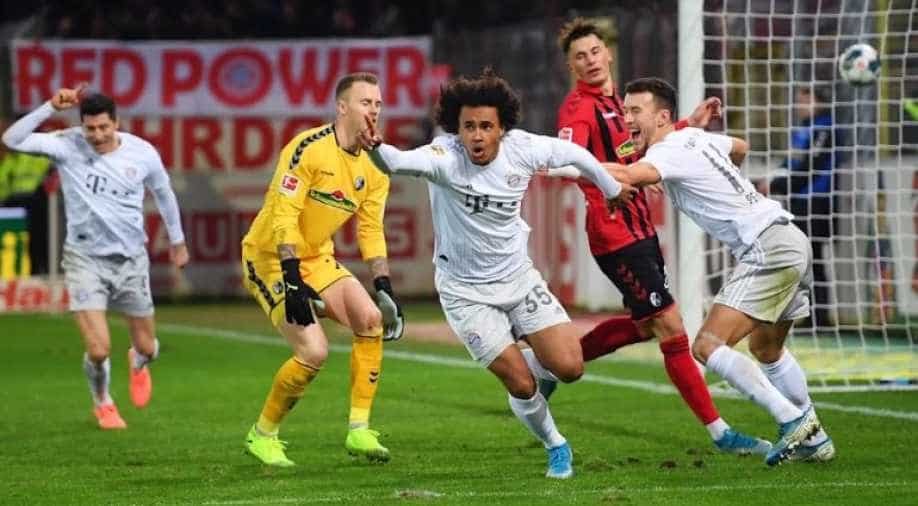 Bayern youngster Zirkzee scores his debut goal for the club in the 90+2" minute of the match against Freiburg Photograph:( AFP )

Bayern Munich's Zirkzee scored on his Bundesliga debut, just two minutes after coming onto the pitch in his team's last-gasp 3-1 win away at SC Freiburg on Wednesday.

18-year-old Dutchman Joshua Zirkzee came on in the 90th minute before breaking a 1-1 deadlock, becoming the youngest player to score a goal this Bundesliga season.

Bayern's Serge Gnabry added another in the final minute of injury time to put the result beyond doubt, crushing the hopes of a dogged and determined home side.

It was business as usual early for Bayern, with Philippe Coutinho's chip over goalkeeper Mark Flekken cleared off the line after just two minutes.

In the 16th minute, 19-year-old Canadian Alphonso Davies put in a superb cross from the left-wing, with Robert Lewandowski on the spot to open the scoring.

It was Lewandowski's 19th league goal of the season – and the sixth time he opened the scoring for Munich this campaign.

The goal seemed to calm Bayern, with the Bavarians content to dominate possession without making too many incursions into the Freiburg end.

After the half-time break, Freiburg showed the form that has taken them to sixth in the table, catching Bayern on the counter to create several half chances.

Freiburg had several chances to take the lead as the clock ran down, with Bayern's players visibly shaken by the home team's relentless pressing.

Moenchengladbach overcame their recent poor form to defeat relegation favourites Paderborn 2-0 through a goal from Alassane Plea and a penalty from Lars Stindl.

Gladbach scored immediately after the break, with Plea's goal coming just 13 seconds into the second half to make it Gladbach's best start to the season in 42 years.

Wolfsburg left it late to equalise at home to Schalke, Kevin Mbabu scoring in the 82nd minute to cancel out a 51st-minute strike from Ozan Kabak.

After starting the season in terrible form, Cologne have now claimed the same amount of points in their past four games (seven) as they did in the first 12 matchdays.

The three points move Hertha four points away from the relegation zone.

Peter Bosz's side are seventh after a second straight defeat.

Klinsmann, appointed at the end of November, made one change from Saturday's victory over Freiburg with Norway midfielder Per Skjelbred starting instead of forward Vedad Ibisevic.

Bosz gave Germany's Jonathan Tah a first start since November after the defender missed two games due to suspension.

Hosts Leverkusen dominated possession throughout much of the game, but Hertha had the best of the scoring chances, frequently breaking on the counter.

Hertha's Javairo Dilrosun had the best chance of the first half, with his left-foot shot in the 20th minute agonisingly close to goal.

For the home side, Moussa Diaby looked the most dangerous down the right-wing.

The visitors got on the scoreboard in the 64th minute after defender Rekik made the most of a second shot at goal after his first effort was kept out by goalkeeper Lukas Hradecky.