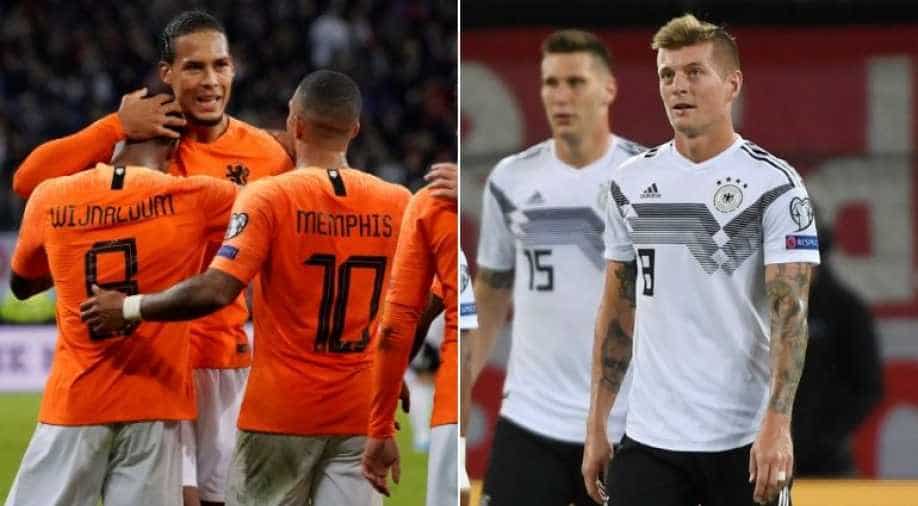 Goals from Frenkie de Jong, a Jonathan Tah own goal, Donyell Malen and Georginio Wijnaldum wrapped up the win after Serge Gnabry had given the hosts an early lead and Toni Kroos had pulled them level at 2-2 with a controversial penalty.

The result leaves Germany on nine points from four games, three behind leaders Northern Ireland, who they face on Monday in Belfast. The Netherlands move to six points from three games and next face bottom side Estonia.

It was a winning return to Hamburg for Dutch coach Ronald Koeman, who won in the port city against the Germans as a player during Euro' 88, and a clear mark of his team's improvement after they failed to reach the last two major tournaments.

"I told my players (at halftime) to stay in the game, not to give them so much space, control the ball better," Koeman told reporters. "That we should just keep going and we would get our chances. In the second half the Germans looked more tired and we benefited from that."

"Overall we worked harder than Germany for this victory," he said.

Joachim Loew's Germany side, undergoing their own overhaul after a disappointing 2018 World Cup first-round exit and Nations League relegation, got off to a good start with Gnabry scoring on the rebound in the ninth minute.

There was little to be seen in terms of attacks from the Netherlands but that changed after the break.

They turned the game around within seven minutes, first scoring through De Jong in the 59th and then taking the lead courtesy of Tah's unfortunate own goal.

The Germans, missing several injured players, including Leroy Sane and Leon Goretzka, were struggling with the Dutch pace down the wings and were lucky to level with a 73rd minute Kroos penalty after Matthijs de Ligt accidentally handled.

There is no video replay for referees in the qualifiers.

The visitors got revenge for their 3-2 loss in Amsterdam in March, striking through debutant Malen in the 79th after a quick combination left the German defence frozen.

"We played below our skill level and abilities," Loew told reporters. "The Dutch were the better team and we deserved to lose. We went ahead but I never had the feeling that we were in control of the game.

"The Dutch kept pressing and then we ended up playing high balls. That is not how we had planned to play. We will now need to analyse this game and draw our conclusions,"

Belarus earned a stoppage-time 2-1 win at Estonia to claim their first points in the other game in the group on Friday.