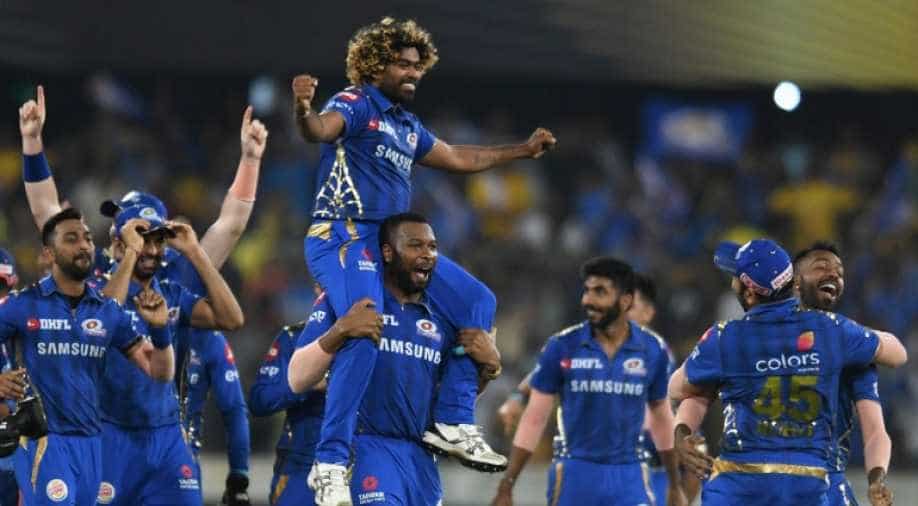 Lasith Malinga kept his nerve with the final ball as Mumbai beat Chennai by one run to clinch a record fourth Indian Premier League title Sunday.

Malinga gave away 49 runs in his four overs but the last two overs by the Sri Lankan and fellow pace bowler Jasprit Bumrah, who took 2-14, were decisive.

The wicket extended the 35-year-old Malinga's record as the all-time best IPL bowler with 170 wickets from 122 games.

"I had confidence in him despite a poor third over. He also had confidence he could do it," Sharma said of his veteran paceman who is an expert at bowling yorkers in the death overs.

"I thought we could use Hardik Pandya for the 20th over, but I wanted to back someone who has done it for us and Malinga has been in that situation and done it."

Unprecedented scenes from Hyderabad as @mipaltan became #VIVOIPL champs for the 4⃣th time!

Lasith Malinga showing his true class in the last over 😎#MIvCSK pic.twitter.com/ZzVK0KHx5O

"At different stages, our bowlers put their hands up and brought us back in the game.

"We backed our ability and our skills, and that's probably why we got rewards."

West Indies batsman Kieron Pollard smashed an unbeaten 41 off 25 balls to set up the Mumbai total after they elected to bat first.

South African captain Faf du Plessis came out all guns blazing to give Chennai a brisk start with his 26 off 13 deliveries.

But Ishan Kishan sent Chennai dangerman MS Dhoni back to the dugout with a direct throw at the bowlers' end to put the defending champions in trouble at 82-4. Dhoni made just two.

Watson batted through the Chennai innings until he was run out in the final over going for an unlikely second run. He smashed four sixes and eight fours in his 59-ball knock.

Chennai leg-spinner Imran Tahir took 2-23 to surpass fellow South African Kagiso Rabada at the top of this year's IPL bowlers chart with 26 wickets. Tahir was also the first 40-year-old to appear in an IPL final.

"It was not a 150 wicket, but the bowlers kept us in the hunt. They kept getting wickets when it was really needed," said Dhoni, whose team has won three titles from eight finals.

The Chennai captain indicated that changes could be made in the batting line-up for next season.

"To be consistent next year, we will have to really think hard. There is nothing against the bowlers, but the batsmen could've done better."

Indian batting legend Sachin Tendulkar, an advisor to the Mumbai team, nervously watched the finale, frequently burying his head in his hands.

"The key moment was Dhoni's run-out," he said.

"But also in patches when Bumrah bowled those critical balls to even out Malinga's one poor over was also crucial.

"And the last over, I thought Malinga finished the game out beautifully."

Australia's David Warner topped the tournament's batting chart with 692 runs, including eight fifties and a 100 not out in 12 IPL games this season.