Mumbai beat Chennai to win the final of IPL 2019 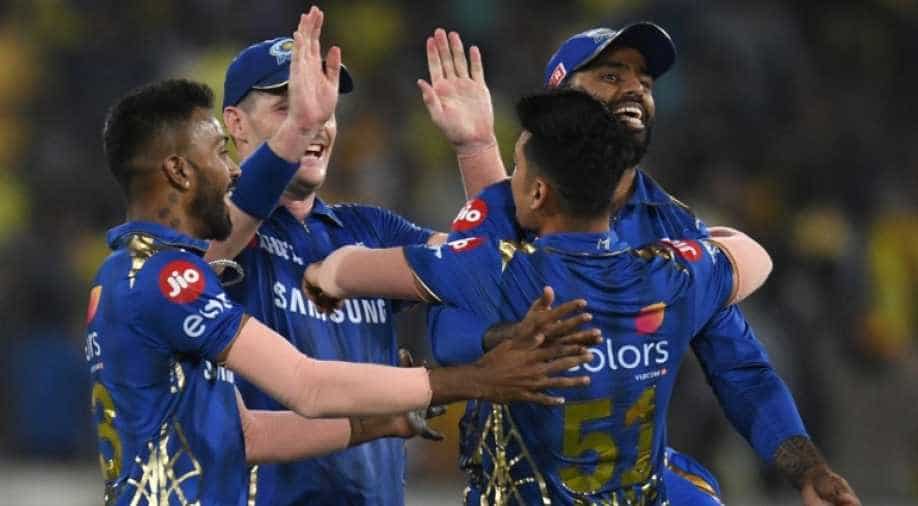 Rohit Sharma-led Mumbai defeated Dhoni's Chennai by just one run in the final of Indian Premier League 2019 on Sunday at the Rajiv Gandhi International Stadium.

This is their fourth title in the IPL history.

Earlier, Chennai dished out a disciplined bowling performance under pressure to restrict Mumbai to 149 for eight.

After opting to bat, Mumbai ended up with a below-par total despite Kieron Pollard's unbeaten 25-ball 41.

Deepak Chahar (3/26) was impressive once again and so was fellow pacer Shardul Thakur (2/37). The spinners, Harbhajan Singh (0/27) and Imran Tahir (2/23), too played a crucial role in limiting Mumbai.

The Rohit Sharma-led side was dealing in sixes early on in their innings with the in-form de Kock collecting three sixes out of the four hit in the first three overs.

After a frugal first over, Chahar went for 20 runs in the following one with the South African wicket-keeper batsman going for his strokes on a true surface.

Thakur was not spared either as de Kock clobbered him over deep-midwicket for his fourth six before top-edging a short one to Dhoni in the same over.

All of a sudden, a promising start got converted into a wobbly one with Rohit getting caught behind off Chahar three balls later, leaving Mumbai at 45 for two in the sixth over.

The Mumbai captain got deceived by a slower one but he still went for the drive, only to edge it to Dhoni.

It was a brilliant a comeback from Chahar after being hit for 20 in his previous over and credit to Dhoni for bringing him back into the attack from the other end and keeping the faith in the team's most successful pacer this season.

With two new batsmen at the crease, the runs dried up before Ishan Kishan hit Dwayne Bravo for two boundaries to take Mumbai to 70 for two in 10 overs.

Suryakumar played on leggie Tahir before the new batsman, Krunal Pandya, was dismissed with a good running catch from Thakur off his own bowling.
It got worse for Mumbai when Kishan tried deposit a Tahir googly out of the park and his mis-hit went into the safe hands of Suresh Raina at cover, leaving Mumbai at 105 for two in 15 overs.

Two of the biggest hitters in the game, Hardik Pandya and Kieron Pollard, were in the middle to put life into the innings and take their team to a fighting total.

Chennai, who had done most things right up till, gave a breather to Pandya as Raina dropped a regulation catch at cover. The dangerous Pandya made his opponents pay smashing Thakur for two sixes in the same over before getting out.

Pollard at the other end did not get enough strike in the death overs. He faced all six balls in the final over and did not take the single off the first three deliveries after not being able to clear the boundary.

He got the much-needed fours off the final two balls but it was not enough to spoil a tidy last over by Bravo.

The attendance at the neutral venue was fitting for a final with more than 32,000 fans turning up.

He takes a wicket as he gets Bravo's wicket.

Again a twist in the game...

Jasprit Bumrah to Bravo, caught behind.

Next batsman is Ravindra Jadeja.

Rohit Sharma did a huge gamble by picking a spinner as Krunal Pandya.

Bravo starts by hitting a sixer and then changes the strike.

Chennai scored 20 runs from 16th over.

Dhoni run out after a brilliant direct throw by Ishan Kishan.

Dhoni has scored 2 runs off 8 balls.

A very tough decision made by the third umpire here at this crucial stage of this game.

This wicket might prove expensive for The Yellow Brigade.

Next batsman is Dwayne Bravo.

Next batsman is Ambati Rayudu.

The first powerplay was dominated by Chennai as they are off to a stable start and lost just one wicket.

Faf gave a splendid start to the team as he scored 26 runs off 13 balls.

Next batsman is Suresh Raina.

Mumbai scored 149 for a loss of eight wickets against Chennai.

He departs on duck!

Next batsman is Jasprit Bumrah.

Deepak Chahar to his brother, catch out by Faf du Plessis.

Next batsman is Mitchell McClenaghan.

A big, big wicket for Chennai.

Deepak Chahar to Hardik, lbw out.

Mumbai go for a DRS review but ultimately, he is given out by the third umpire.

Next batsman is Rahul Chahar.

Its time for strategic time out.

Tahir to Kishan, catch out by Suresh Raina.

With this wicket, Tahir gets the Purple Cap. He has taken 26 wickets so far in the season.

What a catch it was... for a fraction of second, it looked as if Shardul have dropped it but it managed to grasp it properly in his hand. A brilliant running catch!

Next batsman is Kieron Pollard.

Next batsman is Krunal Pandya.

Suryakumar Yadav and Ishan Kishan are playing, Mumbai are 53/2 after 8 overs.

Mumbai started off well after Quinton de Kock hit big shots but now, Chennai have changed the course of the game.

Two wickets in consecutive overs, that's the start a team needs if they aspire to win the title.

Next batsman is Ishan Kishan.

Shardul Thakur to de Kock, catch out by MS Dhoni.

Next batsman is Suryakumar Yadav.

Mumbai win toss, elect to bat first in the final clash against Chennai.

Previously, eight of the 11 finals have been won by the team that won the toss.

If Imran Tahir makes the Chennai's playing XI, he will be the first 40-year old to compete in an IPL Final.

Imran Tahir needs two more wickets to become only the second spinner in IPL history to bag the Purple Cap; the only spinner to finish as the season’s highest wicket-taker was Pragyan Ojha, back in 2010.

Since 2015, they have played a total of nine matches and Chennai have defeated Mumbai just two times and Mumbai emerged victorious on seven occasions.

They have met three times in IPL finals, and Rohit & Co defeated Dhoni's side twice.

What to expect from the match:

Familiar foes and the two most successful teams of the IPL, Mumbai and Chennai, clash in a mouth-watering final, following a rather eventful season that produced some unprecedented moments on the field.

Rohit and Co have dealt with Chennai's spin threat smartly while other teams' batsmen struggled against the experience trio of Imran Tahir, Harbhajan Singh and Ravindra Jadeja.

Chennai pacer Deepak Chahar too has been impressive with 19 wickets so far.

Going into the Qualifier 2, the lack of runs from Shane Watson's bat was a concern but he regained his touch with a 32-ball 50 against Delhi.

Mumbai, on the other hand, will be well rested following a four-day break and backing themselves for a fourth win over Dhoni's side this season and fourth IPL title.

Hello! and welcome to the final of Indian Premier League 2019 which is between the defending champions Chennai and Mumbai.

Get live updates, stats and facts related to the match and follow WION website for more sports related news.