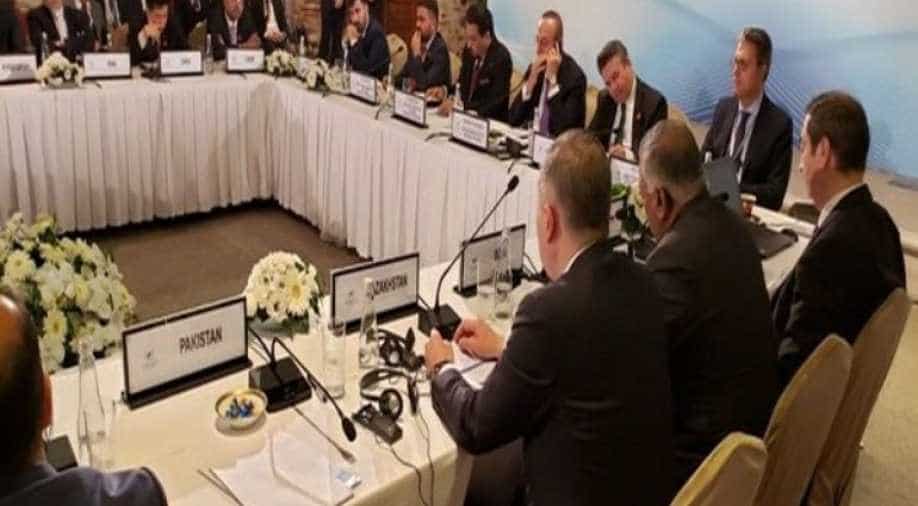 The Pakistan Foreign Minister boycotted Singh`s speech as a mark of protest over India`s move to revoke Article 370 of its Constitution that accorded special status to Kashmir.

As soon as the Indian delegate started speaking at the conference, which aims to promote peace in Afghanistan, Qureshi left his seat and walked out.

The Pakistan Foreign Minister boycotted Singh`s speech as a mark of protest over India`s move to revoke Article 370 of its Constitution that accorded special status to Kashmir.

In September, Qureshi had similarly boycotted Indian External Affairs Minister S Jaishankar`s speech at a SAARC ministerial meeting on the sidelines of the UN General Assembly in New York.

The meeting saw high-voltage drama with Qureshi first holding up the meeting and then refusing to attend the conference until Jaishankar finished his statement.

Responding to Pakistan`s disruption of the meeting, Jaishankar left after addressing the gathering which included leaders and representatives from the regional organisation.It was only after Jaishankar left that Qureshi made an entrance at least half an hour after the meeting had commenced.

In his speech, Erdogan called on the international community to boost investments in Afghanistan during "sensitive" times the country has been going through.

"Afghanistan has been going through a sensitive period. As international community, we need to boost the investments we have been making for Afghanistan for the last 18 years," he added.

The Heart of Asia-Istanbul Process - a regional initiative of Afghanistan and Turkey launched in 2011 - has two chairs with Afghanistan as the permanent chair, and a co-chair from among the member states that shifts each year.

"The process aims to promote regional security, economic and political cooperation centred on Afghanistan through dialogue and confidence-building measures," according to the organisation`s website.

At the ongoing conference, Turkey will hand over its co-chairmanship, which it assumed in 2017 at the 7th Ministerial Conference in Baku, to Tajikistan.