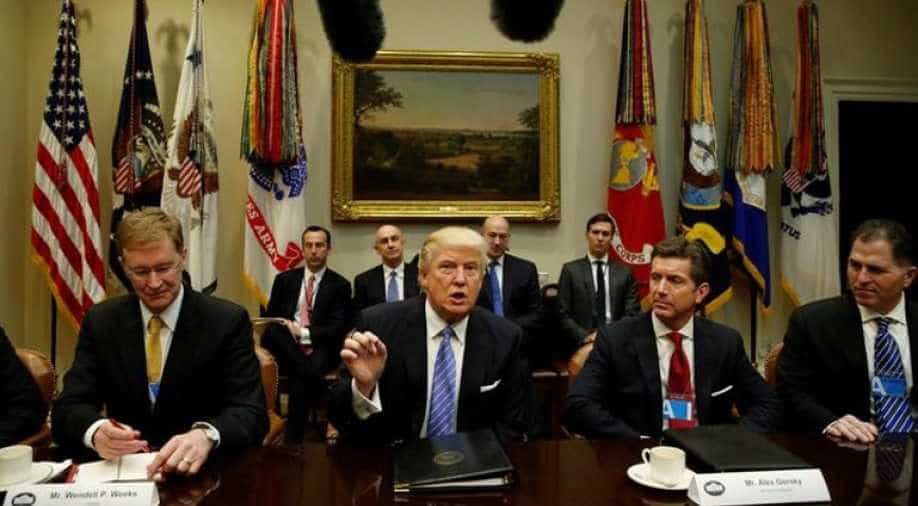 US President Donald Trump met with a dozen American manufacturers at the White House on Monday, pledging to slash regulations and cut corporate taxes, but warning them he would impose taxes on imports if they move production outside the country.

Trump, who took office on Friday, promised to bring manufacturing plants back to the United States - an issue he said helped him win the November 8 election - and has not hesitated to call out by name companies that he thinks should bring outsourced production back home.

He asked the group of chief executives from companies including Ford, Dell Technologies, Tesla and others to make recommendations in 30 days to stimulate manufacturing, Dow Chemical CEO Andrew Liveris told reporters.

Trump, a Republican who took over from former Democratic President Barack Obama, was expected to sign executive orders later on Monday to renegotiate the free trade agreement between the United States, Canada and Mexico, and to formally withdraw the United States from the 12-nation Trans-Pacific Partnership.

The new president told the CEOs that he would like to cut corporate taxes to the 15 per cent to 20 per cent range, down from current statutory levels of 35 per cent - a pledge that will require cooperation from the Republican-led US Congress. But he said business leaders have told him that reducing regulations is even more important.

"We think we can cut regulations by 75 per cent. Maybe more," Trump told business leaders.

The meeting ran longer than expected. Trump left briefly to attend to a phone call, and then reconvened the CEOs in the Oval Office, Liveris said.

Fields said he was encouraged by the tone.

"I know I come out with a lot of confidence that the president is very, very serious on making sure that the United States economy is going to be strong and have policies - tax, regulatory or trade - to drive that," he said.

Trump told the executives that companies were welcome to negotiate with governors to move production between states, but said those businesses that choose to move factories outside the country would pay a price.

"We are going to be imposing a very major border tax on the product when it comes in," Trump said.

"A company that wants to fire all of its people in the United States, and build some factory someplace else, and then thinks that that product is going to just flow across the border into the United States - that’s not going to happen," he said.

Liveris said the CEOs discussed the border tax "quite a bit" with Trump, explaining "the sorts of industry that might be helped or hurt by that."

"Look: I would take the president at his word here. He's not going to do anything to harm competitiveness. He's going to actually make us all more competitive," Liveris said.

Trump was scheduled to hold a meeting later on Monday with labor leaders and US workers, the White House said.

Between winning the presidential election in November and taking office, Trump hosted a number of US CEOs in meetings in New York, including business leaders from defense, technology and other sectors. He also met with leaders of several labor unions, including the AFL-CIO.

Trump, a real estate developer who had never previously held elected office, has particularly focused on manufacturing, lamenting during his inaugural address on Friday about "rusted-out factories scattered like tombstones across the landscape of our nation" and vowing to boost US industries over foreign ones.