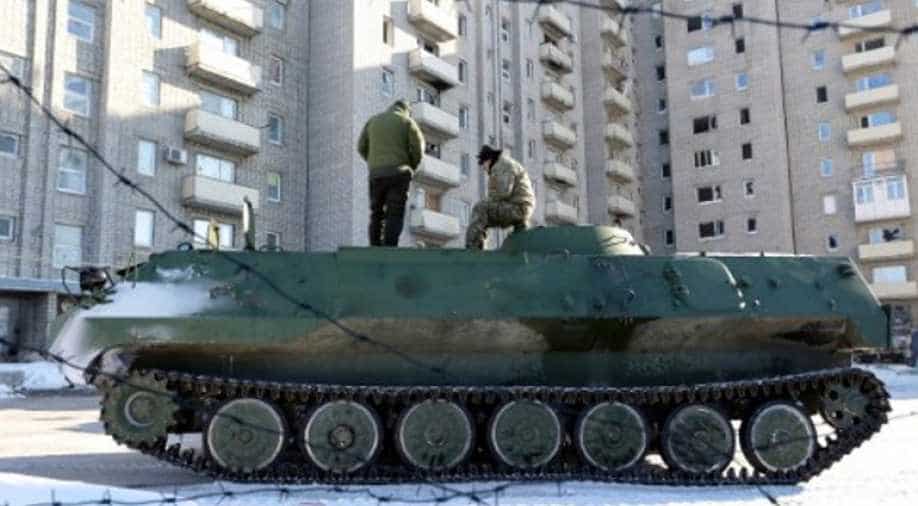 The conflict has killed nearly 10,000 people -- more than half of them civilians -- and plunged Moscow`s relations with the West to a post-Cold War low. Photograph:( AFP )

A sudden surge in clashes between Ukrainian forces and Russian-backed rebels killed at least seven people on Monday despite a tattered truce in Ukraine's war-scarred east.

The overall death toll reported for the past two days rose to 12 after the bloodiest outburst of violence since the former Soviet republic and its foes last month agreed an "indefinite" ceasefire.

But Poroshenko cut short his visit to Berlin after hearing news of the deaths, his spokesman told AFP.

"Since Sunday, there have been continuing clashes and heavy attacks on our positions," Ukraine's 72nd army brigade spokeswoman Olena Mokrynchuk told AFP.

The military in Kiev said three of its soldiers had died overnight.

An AFP reporter in the town of Avdiivka near the de facto rebel capital Donetsk saw Kiev troops capture three rebels on Monday. Two of them later died of their wounds.

The electricity has been off since Sunday and water supplies are sporadic in Avdiivka amid the shelling and gunfire.

The bloodshed put at risk yet another attempt by exasperated mediators to end one of Europe's bloodiest conflicts since the 1990s Balkans wars.The violence coincided with Poroshenko's visit to Berlin to meet ally Merkel -- the German leader who along with French President Francois Hollande helped hammer out a 2015 peace deal in the Belarusian capital Minsk that has failed to achieve results.

"We are certain that today we need decisive and united action that can motivate Russia to sit at the negotiating table and fully implement the Minsk agreements -- particularly its security component -- to stop civilians from dying," Poroshenko said in Berlin before entering the meeting.

"We believe that not only should the sanctions be maintained, but they should be intensified as well," he added.

Merkel said she found the situation "worrying" but gave no indication on whether she intended to add to the pressure on Putin.

The east of Ukraine comprises coal mines and steel mills whose possession is coveted by both sides of the war, which broke out in April 2014.

The clashes started in the Russian-border regions of Donetsk and Lugansk after a February 2014 revolution ousted Ukraine's Moscow-backed leader and put Kiev on a pro-Western course.

The sides have since agreed to a series of temporary ceasefires and an "indefinite" one on December 23, but none have been respected.

The conflict has killed nearly 10,000 people -- more than half of them civilians -- and plunged Moscow`s relations with the West to a post-Cold War low.

Russia denies backing the insurgents and only admits that "volunteers" and off duty soldiers had entered the war zone of their own free will.