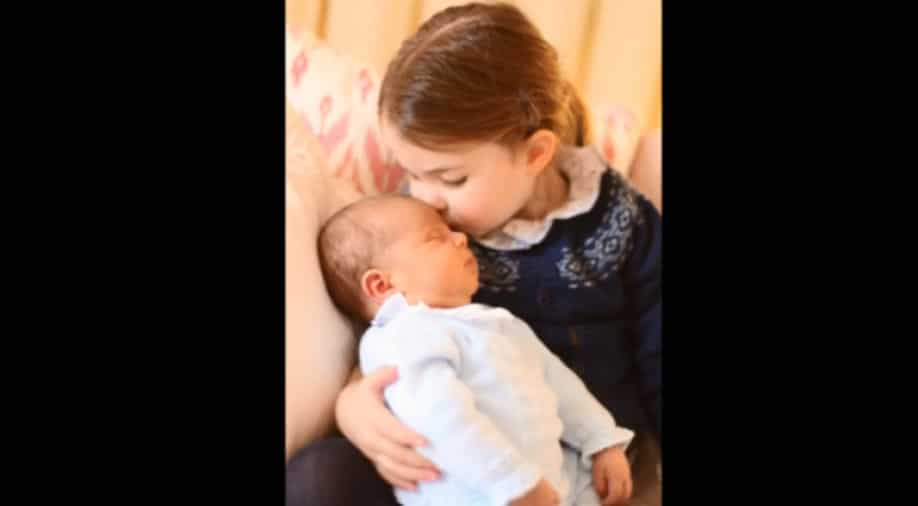 Both the photographs were taken at Kensington Palace by Kate, the children's mother and wife of Prince William, Queen Elizabeth's grandson

The first photograph, which the palace said was taken on April 26, shows Louis propped up against a white cushion, adorable in a white jumper and trousers.

This image of Prince Louis was taken by The Duchess of Cambridge at Kensington Palace on 26th April.

The Duke and Duchess would like to thank members of the public for their kind messages following the birth of Prince Louis, and for Princess Charlotte’s third birthday. pic.twitter.com/bjxhZhvbXN

The other photograph shows the cherub being held and kissed by his sister, three-year-old Princess Charlotte.

The Duke and Duchess of Cambridge are very pleased to share two photographs of Princess Charlotte and Prince Louis, taken by The Duchess at Kensington Palace.

This image was taken on 2nd May, on Princess Charlotte’s third Birthday. pic.twitter.com/H5VVgIwRGp

Both the photographs were taken at Kensington Palace by Kate, the children's mother and wife of Prince William, Queen Elizabeth's grandson.

Due to a 2013 change in the law, Charlotte is the first British princess for whom the arrival of a younger brother does not mean being demoted down the line of succession.

Louis would not join the rest of his family at the May 19 wedding of his uncle, Prince Harry, to US actress Meghan Markle, palace officials said.