For Taiwan youth, military service is a hard sell despite China tension 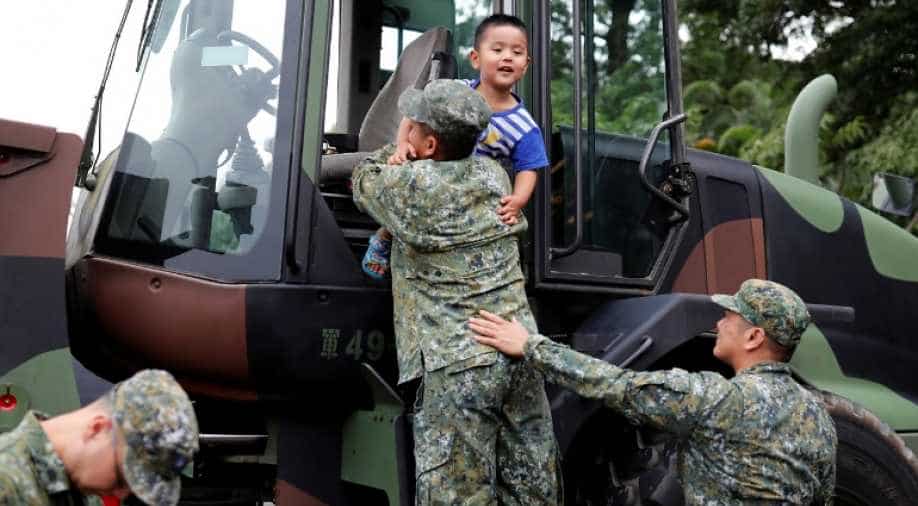 A solider puts a child into a military vehicle during a public fair. Photograph:( Reuters )

Beijing sees self-ruled Taiwan as a wayward province and has never renounced the use of force to bring it to heel.

But many listening students showed little interest, arguing national service was a "waste of time" and prospects of the self-ruled island standing up economically or militarily to an increasingly aggressive China were slim.

"China could simply crush Taiwan with its economic power. There's no need for a war, which wastes money," said 18-year-old Chen Fang-yi, an engineering major. "I do not have much confidence and expectation for the national army."

From lectures in universities and high schools across the island, life-size dancing dolls to a flash mob performance by a special forces unit, Taiwan's military is working hard to recruit soldiers as it moves to a fully volunteer force after decades of conscription.

Taiwan vowed in 2011 to phase out conscription to cut costs and boost the professionalism of its forces as it tries to better deter the Chinese threat through enhanced cyber warfare capabilities and other high-tech weapons.

The island's defence ministry said it will be able to reach a target of enlisting 81 percent of the estimated 188,000 volunteer troops needed to defend against any attack by Beijing by year-end. It hopes to raise that to 90 percent by 2020.

Beijing sees self-ruled Taiwan as a wayward province and has never renounced the use of force to bring it to heel.

But military experts and government auditors say recruitment is proving challenging and the growth in voluntary recruitment isn't fast enough to catch up with a worsening military imbalance across the strait.

China, whose official defence budget grew to roughly 15 times that of Taiwan's last year, has alarmed Taipei by flying bombers around the island and luring away members of its dwindling band of diplomatic allies.

In a report from December, three government auditors warned the growth of voluntary recruits had been slow, raising concerns about Taiwan's combat power.

"The government needs to think whether it's necessary to bring conscription back if they think national security matters," said Lin Yu-fang, a convener for the Taipei-based National Policy Foundation and former head of Taiwan's congressional defence and foreign committee.

"We will pay a heavy price for the move...We won't be able to find enough soldiers."

The island's defence ministry told Reuters it will continue to raise the quantity and quality of its armed forces and has made all necessary plans for possible military actions from China. It also urged the public to give "support and encouragement" to the transition.

Convincing more young people to join the armed forces is made more difficult by Taiwan's past as a military dictatorship. The death of a young conscript in 2013 after being punished for misconduct, which triggered large protests, also dealt a blow to the army.

The service is so unpopular that more than 1,000 reservists were charged in the last three years for dodging mandatory retraining.

"It raises a very difficult question about national morale. If there ever is a conflict, what are people going to do?" said William Stanton, professor at National Taiwan University and former head of the de facto U.S. embassy in Taipei.

The island's goal to move to an all volunteer force by 2019 will be "costlier than anticipated", diverting funds from defence acquisition and readiness, the U.S. Defense Department said in a report to Congress in May.

Taiwan has shortened its mandatory service to a four-month training, from three years, a move analysts said was made to placate young voters who prioritise personal liberty over civil obligations.

But for some, even the reduced training is seen as an exercise in futility.

"We won't win a war with China anyway," said 20-year-old graduate Hsu Kai-wen, a reluctant conscript who was recently assigned a four-month service in the navy after drawing lots. "Why do I need to waste my time in the army?"