Explainer | Macron or Le Pen: Why it matters for France, the EU and the West 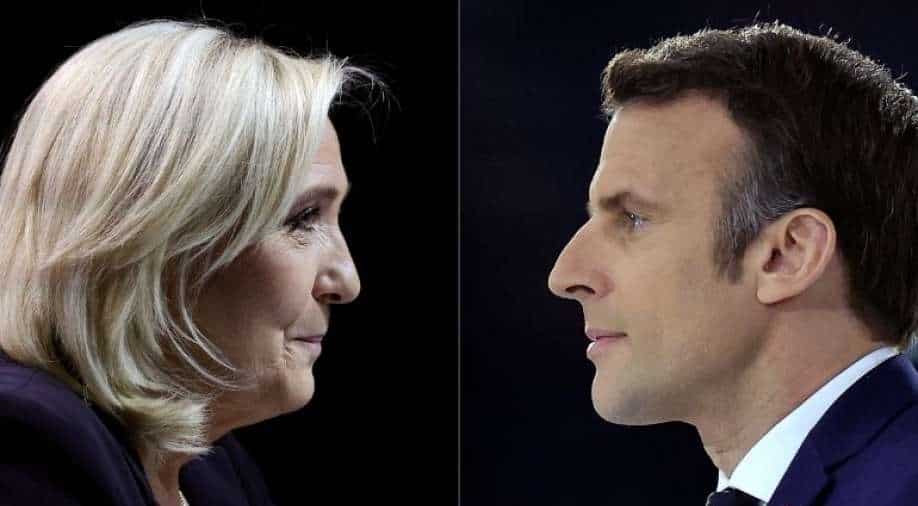 In France, the election seems to be centred around far-right candidate Marine Le Pen and the incumbent President Emmanuel Macron

The French will decide on April 24 whether to re-elect pro-business centrist President Emmanuel Macron or blow up decades of mainstream consensus in favour of far-right Marine Le Pen.

Here's what to expect from them on major issues:

Le Pen: The far-right heiress has transformed the former National Front, turning her father's free-market, small-government party into a big-spending, protectionist one.

She wants to implement a "Buy French" policy for public tenders, cut the minimum retirement age to 60 for those who started work before 20, scrap income tax for those aged under 30 and cut VAT on energy to 5.5 per cent from 20 per cent.

She would also spend 2 billion euros ($2.18 billion) over 5 years raising hospital workers' salaries and recruiting an extra 10,000 of them. Teachers' salaries would rise 15 per cent over 5 years.

Gilles Ivaldi, a political scientist at Sciences-Po, says her party's economic programme is further to the left than it has been for decades.

Macron: The French leader plans to double down on supply-side reforms he has implemented during his first mandate, with the main plank of his manifesto being an increase in the minimum pension age to 65 from 62.

Macron is also promising to make some welfare benefits conditional on 15-20 hours of training, similar to policies in countries such as the United States or Britain.

Unemployment insurance, which currently guarantees workers up to two-thirds of their salary for two years if they lose their job, would be linked to the strength of the economy.

In his attempt to stay true to his "neither left nor right" motto, he has also promised to make benefits automatic for those who qualify instead of requiring would-be recipients to apply.

Le Pen: Although she has abandoned earlier plans to leave the euro and pay France's debt in newly created francs, Le Pen has nonetheless pledged to cut contributions to European Union coffers. Such a move would put Paris on a collision course with the European Commission and other EU members.

She insists French law should prevail over EU rules, in a challenge to the bloc's top court, and says she wants eventually to replace the EU with a "Europe of nations", though she has yet to spell out what that would look like.

Macron: The ardent Europhile would continue his push to develop what he calls Europe's "strategic autonomy" in defence, technology, agriculture and energy and reduce the bloc's dependence on other powers.

Over the past five years, Macron has sought to re-orient the EU towards a more protectionist stance, blocking some free-trade deals with other blocs such as Mercosur and creating a mechanism that increases scrutiny of outside takeovers of strategic EU companies.

Macron is also likely to push for more regulation of US tech giants and has said he wanted to create a "European metaverse" to compete with Facebook's.

Opponents accuse her of being too close to Moscow. Her party received a bank loan from a Russian bank in 2014 and she was hosted by Russian President Vladimir Putin at the Kremlin shortly before the 2017 presidential election.

She has condemned Russia's invasion of Ukraine but says Moscow could be an ally again post-war.

In an interview with Reuters, she called herself a "Gaullist", after wartime leader Charles de Gaulle, and said she would pursue a foreign policy at an equal distance from Washington and Moscow.

Asked if she had a message to France's traditional allies, Britain and the United States, she said: "Drop the preconceived ideas you have about me."

Macron: Although Macron ruffled feathers across the trans-Atlantic alliance, notably in eastern Europe and Germany, when he called NATO "brain-dead" in 2019, he has since said the Russian invasion of Ukraine had "jolted it back to life".

He would nonetheless seek to make Europeans less dependent on the US military for security.

Macron has pushed the EU to focus more on the Indo-Pacific and China's rising influence in the region. However, he clashed with Washington, London and Canberra after Australia ditched a massive submarine deal with France.

He has been guarded over whether he would seek to cooperate with the new US-UK-Australia security alliance - dubbed AUKUS - against China or try and persuade the EU to pursue its own independent policy towards Beijing.