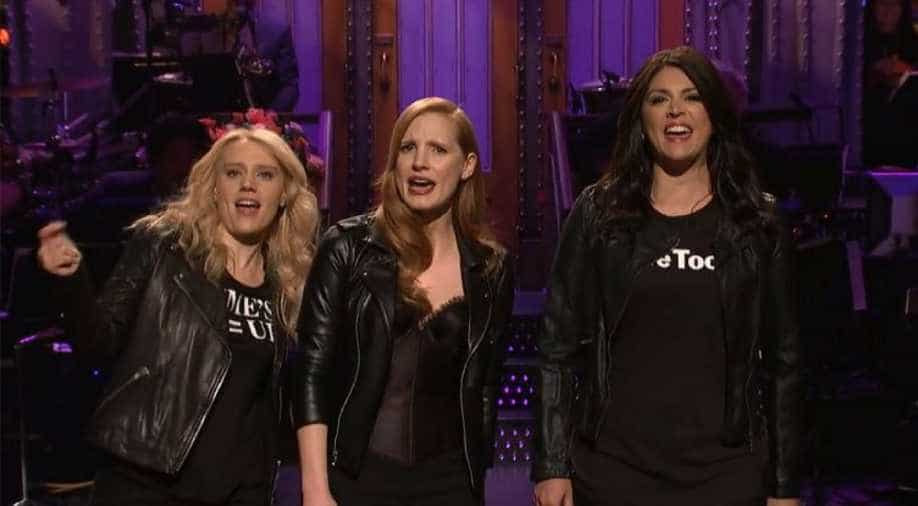 The Oscar-nominated actress brought female empowerment to the live show. Photograph:( Others )

Hollywood actress Jessica Chastain hosted Saturday Night Live over the weekend and she painted the show black in 'Time's Up' movement's colours.

The 40-year-old actress came on stage for her opening monologue in an all-black ensemble and said: “I’m really excited to be here, especially today, because this weekend is the one-year anniversary of the Women’s March! And everyone knows women never forget an anniversary,” before adding, “I wish I could have been there marching alongside them.”

She was then joined on stage by Saturday Night Live players Kate McKinnon and Cecily Strong, who were clad in 'Time’s Up' and 'Me Too' shirts.

During the show, the trio could be seen breaking into a dance on Lesley Gore’s You Don’t Own Me, paying homage to the 1996 film "The First Wives Club".

Soon after the show's cast member Beck Bennett came on the stage wearing a 'Future Is Female' shirt, saying, “Hey guys, we want to march too.”

The host Chastain could be seen appreciating them and said, “That’s so sweet, thank you for being allies."

Watch the clip to see the funny sketch: