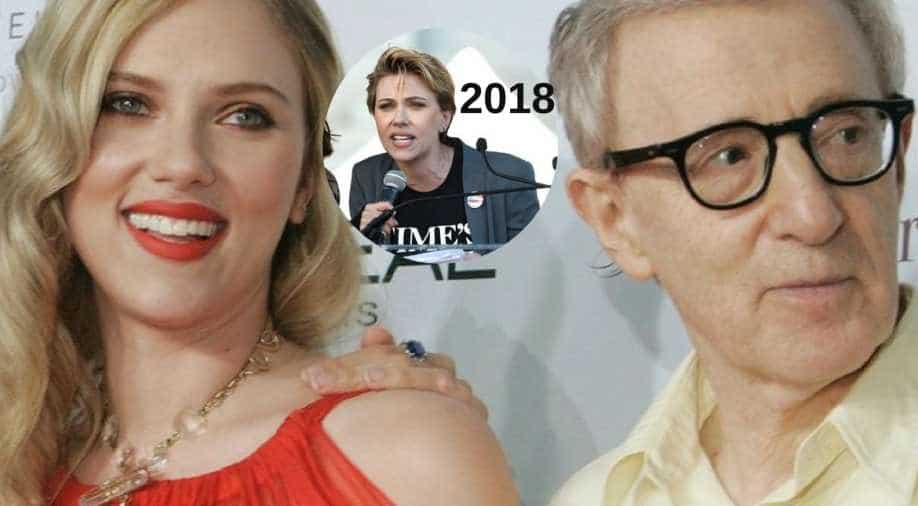 Actress Scarlett Johansson with director Woody Allen in 2008, as opposed to her in 2018 at Women's March in Los Angeles. Photograph:( Reuters )

Hollywood actress Scarlett Johansson is now being slammed for calling out on fellow actor James Franco on the issue of sexual assault -- while defending director Woody Allen who has been levelled the same charges by his adopted daughter.

Taking an active charge in Women's March that happened on Saturday and Sunday in various parts of the United States as part of a protest for equality and empowerment, Johansson took a dig at actor James Franco and was heard asking for her 'Time's Up' pin back.

She said, "I want my pin back, by the way" on Saturday in reference to the 'Time’s Up' pin Franco wore at the Golden Globe Awards 2018 -- which inspired five women to come forward and press accusations of sexual assault and abuse against the actor.

While she was lauded for her vocal act by some, there were others who took to Twitter to express their dismay at her hypocrisy and double standards. This, as the actress had on an earlier occasion, defended director Woody Allen when the same charges were pressed against him by his adopted daughter, Dylan Farrow.

At the time when Allen’s estranged daughter Dylan Farrow penned an open letter accusing him of sexual abuse in 2014, Johansson said that the child abuse allegations against the director were "all guesswork".

She was quoted:  “It's not like this is somebody that's been prosecuted and found guilty of something, and you can then go, ‘I don't support this lifestyle or whatever.’ I mean, it's all guesswork.”

Social media users pointed out Johansson's double-standards and slammed her for defending the director who she had worked with, in the past.

This is what some users wrote:

Scarlett Johansson the biggest hypocrite that is there....calls out James Franco yet supports Woody Allen and would hem his pants if she had too....wow!!!

Scarlett Johansson on James Franco: "I want my pin back."

Scarlett Johansson on the accusations against Woody Allen: "It's all guesswork." https://t.co/lI71pNKkPH

“I think it’s irresponsible to take a bunch of actors that will have a google alert on and to suddenly throw their names into a situation that none of us could possibly knowingly comment on.”Scarlett Johansson aboutWoody Allen and yet she’s doing the EXACT SAME THING WITH FRANCO

Scarlett Johansson thought she'd look smart by shading James Franco cause apparently innocent until proven guilty means nothing these days so, I look forward to her stepping down from working with Marvel since Stan Lee was also accused. I'll wait.

Woody Allen has denied the allegations from his adopted daughter, Farrow, 32, who claimed he sexually abused her when she was 7 years old. However, Farrow’s brother Ronan, who wrote a blockbuster expose on the allegations against film mogul Harvey Weinstein, has supported her.