Women around the world march against Trump 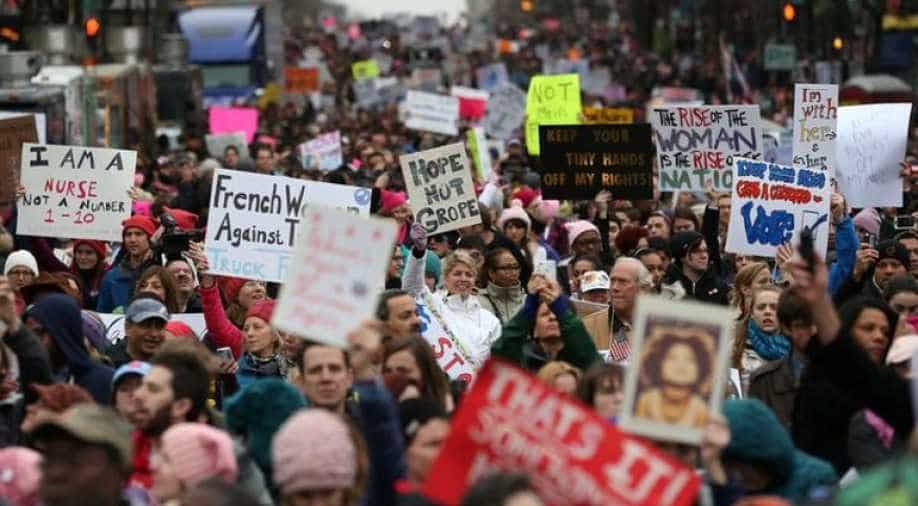 More than half a million people also swarmed the streets of Los Angeles, according to police there, and a similar number gathered in New York. Other marches took place in Chicago, Dallas, San Francisco, St. Louis, Denver and elsewhere. Photograph:( Reuters )

More than two million people flooded the streets of Washington and other US cities and demonstrators around the world joined in as women opposed to Donald Trump led a peaceful, stunning rebuke against the new US president.

As a sea of protesters brought downtown Washington to a standstill, streaming past the White House in pink "pussyhats," Trump launched a withering attack on the media, accusing it of downplaying or even lying about the attendance at his swearing-in a day earlier.

The new president was certainly aware of the hundreds of thousands of people who poured into Washington and brought the downtown area near the White House and the National Mall to a standstill for hours.

Hundreds of thousands of marchers brought downtown Washington to a standstill for a few hours, streaming past the White House in pink, cat-eared 'pussyhats' (Reuters)

Madonna performed at the Women's March in Washington on January 21, 2017. (Reuters)

Demonstrators make their way during the Women's March on January 21, 2017 in Barcelona, Spain. Sister marches took place simultaneously across the world, with women rallying in support of women's rights. (Getty)

One of the Largest March was held in London, where tens of thousands of women, men and children marched. (Getty)

Protesters take part in the Melbourne rally to protest against the Trump Inauguration on January 21, 2017 in Melbourne, Australia (Getty)

Although the US capital does not release crowd counts, organisers of the Women's March on Washington told AFP they estimated turnout at one million -- quadrupling initial expectations -- with huge crowds joining sister marches around the country.

More than half a million people also swarmed the streets of Los Angeles, according to police there, and a similar number gathered in New York. Other marches took place in Chicago, Dallas, San Francisco, St. Louis, Denver and elsewhere.

Roused by fiery speeches, the protesters sent out a resounding message of rebuke and resistance the day after the Republican hardliner took office with a vow to roll back the legacy of his predecessor.

"It feels amazing" to join women pushing back against Trump's divisive, discriminating and threatening rhetoric, said 16-year-old Maria Iman, who travelled to Washington with fellow high school students from Illinois.

"I'm part of history and one day will tell my children about this."

A sea of women and men -- teens, pensioners, parents with toddlers on their shoulders -- swarmed the streets in a determined show of unity.

Educator Tanya Gaxiola, 39, who flew in from Tucson, Arizona, expressed concern that Trump will seek to restrict abortion laws and otherwise clamp down on women's rights.

"He's a narcissist and seeks approval, and this is a big display of disapproval," Gaxiola said. "Hopefully, it catches his attention."

"Women won't back down," "Women's rights are human rights" and "Thank you Trump -- you turned me into an activist," read some of the thousands of handmade signs held aloft in the capital.

'Fight back!'
In Boston, where up to 175,000 people demonstrated, fiery Democratic Senator Elizabeth Warren took aim at Trump's campaign of "attacks" on women and minorities.

"We can whimper. We can whine. Or we can fight back!" Warren said to a loud roar.

Saturday's rallying cry was heard far beyond America's shores, with organisers saying over 2.5 million people signed up for one of more than 600 marches worldwide.

One of the largest was in London, where tens of thousands of women, men and children marched chanting "Dump Trump."

The human tide flooding Washington appeared to dwarf the throngs of Trump supporters in red "Make America Great Again!" caps who had cheered his swearing-in.

Many wore knitted "pink pussyhats" in an allusion to Trump's videotaped boasts of being able to grab women's genitals with impunity because he is famous.

Trump's defeated rival Hillary Clinton tweeted her support to the protesters, while former secretary of state John Kerry was spotted in the crowd -- a day after leaving office -- with his dog on a pink leash.

Pop diva Madonna, wearing her own black pussyhat, made an impromptu appearance on the Washington protest stage to deliver an expletive-laden indictment of the president.

"Welcome to the revolution of love," the 58-year-old intoned. "To the rebellion. To our refusal as women to accept this new age of tyranny."

'1,000 per cent'
On his first full day in the world's most powerful office, Trump visited the headquarters of the CIA, an agency he feuded with bitterly before taking office.

"I am with you 1,000 percent," Trump said in a short address to CIA staff -- during which he also accused US media playing down the inauguration turnout.

But he bizarrely turned his speech toward an assault on the media for their reporting on inauguration crowd size.

His press secretary, at his first briefing in the White House, also launched into reporters, falsely claiming that "this was the largest audience to ever witness an inauguration, period!"

His first act in office -- signing an executive order aimed at freezing Obama's signature health care law -- was a potent gesture in that direction, with more such actions expected to follow.

But if Friday was Trump's day -- marred by sporadic outbreaks of vandalism and more than 200 arrests -- Saturday belonged to demonstrators with fresh memories of his fat-shaming a former beauty queen, sex assault allegations and a controversial stance on abortion.

The Women's March began with a simple Facebook post from Hawaii grandmother and retired lawyer Teresa Shook to about 40 friends -- but word travelled quickly and the event took on a life of its own.