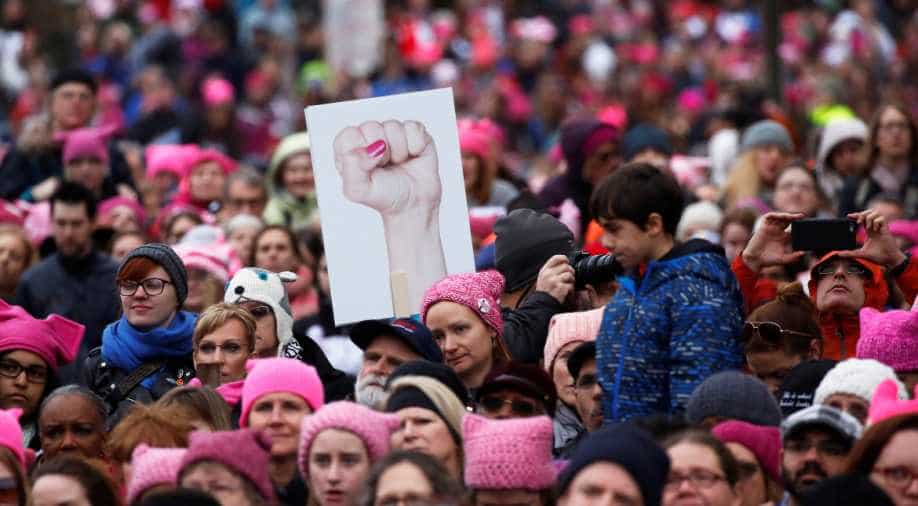 Women poured into Washington on Saturday to express concern, anger and outrage over Donald Trump's taking over as the 45th US president, in the "Women's March on Washington."

That demonstration inspired many more nationwide, with more than two million people flooding the streets of US cities for a peaceful day of protest. Here are the views of some who spoke to AFP.

'Furious'
Jennifer Behr, a fashion accessory designer from Brooklyn, arrived from Baltimore on a train packed with passengers wearing pink "pussy" hats, one of the symbols of the protest.

"It's important we assert our majority and we have a large physically presence" to show President Donald Trump and the Republican majority in Congress "that they cannot railroad our country," said Behr, 42.

"I am furious at Trump's treatment of women and how he talks about women," she said.

She was especially incensed about the "decades of Republican attacks" on Democrat Hillary Clinton "and trying to undermine her as a strong women throughout her career."

'Part of history'
A group of high schoolers from Chicago who had chartered an overnight bus to the rally chanted and waved a banner that read "Illinois youths grab 'em by da" above a picture of a cat.

"I'm part of history and one day will tell my children about this," said 16-year-old Maria Iman, whose parents are from Mexico.

"They didn't have a voice -- I wanted to be here showing them that their voice does matter."

'He's a narcissist'
Christina Coughlin flew in from San Francisco, joining up with five friends who also journeyed to the US capital for the demonstration.

"I live in San Francisco -- I learned that I cannot be complacent in that place of safety where it is very liberal and socially conscious," the 39-year-old said. "I can't just relax into that; I have to stand up for things."

Her friend Tanya Gaxiola, 39, flew in from Tucson, Arizona with her husband.

"He's a narcissist and seeks approval, and this is a big display of disapproval," she said of the new president. "Hopefully it will affect him. Hopefully, it catches his attention."

'Protect our rights'
Trisha Norman, 72, traveled from North Carolina for the protest and clutched a sign that read "Beware of the Gaslighter in Chief" -- a reference to a form of manipulation featuring denial, misdirection and outright falsehoods to sow doubt and confusion.

"I want protect our rights," she said, and to "bring attention that when people are standing together, they will be strong."

- Muslims not 'terrorists' -
Norman was accompanied by her sister Barbara Hilton, 62, who wore a pink "pussyhat," the knitted caps marchers have adopted in a sly allusion to Trump's crude sexual references to women.

"The family of my husband are immigrants," said Hilton. "They are Muslim. Not one is a terrorist."

But a lot more than that was at stake, she said.

The 60-year-old African American said she fears a return to the ugly days of racial segregation.

"Now we are going back to where we were in the 50s, and I am not going to stand for it," she said.

"Most of America is very open to human rights, religious rights, everything, and that's what these people are standing for right now."

Protesters on a plane
Kathy Small flew in from Flagstaff, Arizona for the march.

"The plane was filled with people who were coming from little towns to come here," said the 67-year-old professor.

She found it "remarkable" that the crowds were thin for Trump's inauguration on Friday.

"It doesn't look anything like Obama's inauguration where I think the country was genuinely happy as a whole," she said.

'Can't rob us'
Mara Naaman brought her two kids to the New York march, where organisers claimed a crowd count of half a million.

"I don't want the world to feel that he represents all of us," the 42-year-old said. "When you see all of the women out today you feel like he can't rob us."

'A beautiful sea of humanity'
Los Angeles Police Department spokesman Andrew Neiman said the gathering was the largest he had seen in the city in his three decades on the job in the city where organisers estimated a turnout of 750,000.

"I have actually really enjoyed my day today," he said. "It is a beautiful sea of humanity. It was wonderful."

Cassy Clarke, an elementary school teacher, said she "was never someone who goes into the streets, but since Trump go elected I protested twice and intend to go as often as needed."

"Today made me proud to be an American again."