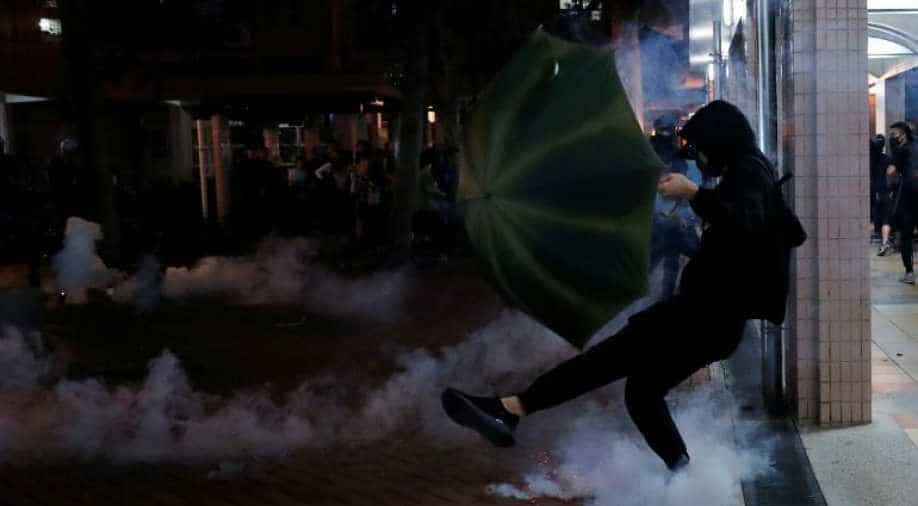 China's Communist Party said on Tuesday it would not tolerate any 'separatist behaviour' after some protesters called for independence.

Beijing supports more bold measures to tackle the roots of unrest that has rocked Hong Kong for months, a senior Chinese official said on Wednesday, just hours after a knife-wielding man attacked a pro-Beijing lawmaker in the financial hub.

Han Zheng, China's vice premier, said at an official meeting with Carrie Lam, Hong Kong's embattled leader, in Beijing anti-government protests were damaging the "one country, two systems" formula under which the city has been governed since its handover from Britain to Beijing in 1997.

"We firmly support the Special Administrative Region government to adopt more proactive and more effective measures to solve the social problems," Han said as he sat next to Lam in a meeting room in the Diaoyutai State Guesthouse.

Han said the social problems included unaffordable housing in the city, which is classified as a special region of China.

China's Communist Party said on Tuesday it would not tolerate any "separatist behaviour" after some protesters called for independence. Han said the violence had exceeded the "bottom line" of the rule law and of morality.

What started as agitation against a now-scrapped extradition bill, which would have allowed people to be sent to mainland China for trial, has widened into calls for full democracy, among other demands.

Anti-government protests stretching back more than five months have plunged Hong Kong into its biggest political crisis in decades and pose one of the gravest challenges to Chinese President Xi Jinping's rule since he came to power in 2012.

Han was meeting Lam just hours after a man stabbed pro-Beijing lawmaker Junius Ho in the chest with a knife, the latest incident in a series of attacks on candidates running in the city's November 24 district council elections.

Both pro-democratic and pro-establishment figures have been attacked.

The alleged attacker was subdued and arrested. Ho said in an online statement he had suffered a knife wound to the upper left part of his chest but said his life was not at risk. Two of his colleagues were also hurt, he said.

The attacker's motive was not known but Ho gained notoriety among anti-government protesters in July when he was filmed laughing and shaking hands with suspected triad gang members who assaulted young demonstrators.

An online video showed the assailant handing Ho a bunch of yellow flowers before taking a weapon out of his bag and stabbing him.

Hong Kong's government strongly condemned the attack on Ho and said in a statement that members of the public should "express their views in a peaceful and rational manner with respect for each other".

Jimmy Sham, a leader of Hong Kong's Civil Human Rights Front, was among other prominent people to be attacked during the months of sometimes violent unrest. He was beaten by several men with hammers in October after his group organised mass rallies against the extradition bill.

Pro-democracy district councillor Andrew Chiu also had part of his ear bitten off by a knife-wielding man outside a mall this week.

Further protests are planned on Wednesday at some of Hong Kong's universities, activists said. Police fired water cannon to disperse protesters at a Guy Fawkes-themed march on Tuesday.

Hundreds of black-clad student protesters gathered at the University of Hong Kong's campus to protest against perceived police brutality and to call for an independent investigation into an incident that left a student from another university fighting for his life.

The student fell during protests at the weekend and remained on life support, hospital authorities said, as some of his friends also gathered at the hospital to pray for him.

Protesters are demanding an end to perceived Chinese meddling in the territory's affairs, as well as universal suffrage and an independent inquiry into police behaviour, among other demands.

President Xi met Lam on Tuesday in Shanghai, vouching support for her administration.

Following that meeting, Lam denied rumours that the government was considering an amnesty for protesters charged with offences.