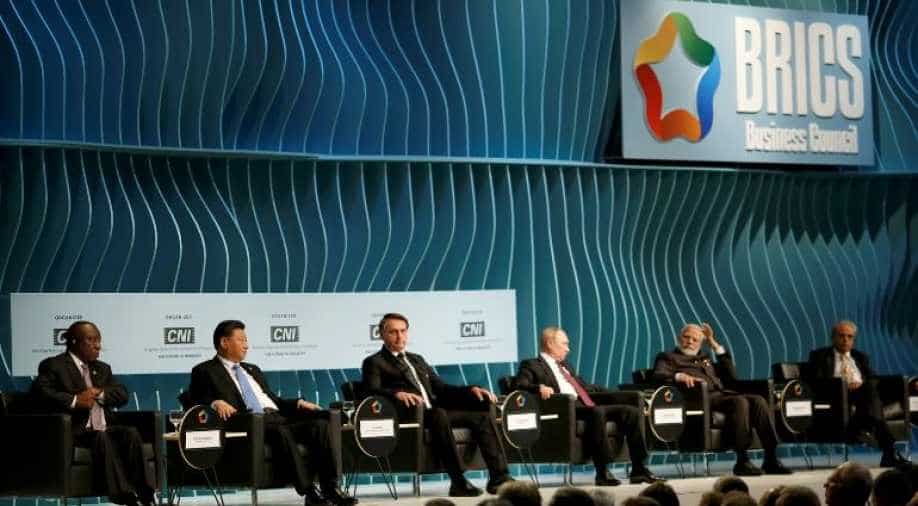 Russian President Vladimir Putin said global growth rates have been declining without interruption since the beginning of 2018 and will reach the lowest point in 10 years.

Leaders of the BRICS group of emerging economies on Wednesday criticised what they view as politically motivated protectionism at a time of a global slowdown and said their countries are doing their best to counter the trend.

At their annual summit, the leaders of China, Russia, India, Brazil and South Africa called for greater inter-BRICS trade and investment and urged the group's New Development Bank to pump more funding into infrastructure and sustainable growth.

"Protectionist and bullying counter-currents bring shocks to international trade, adding to downward pressure on the world economy," Chinese President Xi Jinping, whose country is locked in a trade war with the United States, told the summit in Brazil.

Russian President Vladimir Putin said global growth rates have been declining without interruption since the beginning of 2018 and will reach the lowest point in 10 years, citing International Monetary Fund forecasts.

"The global economy has been influenced by the wide usage of unfair competition in trade, unilateral sanctions, including those that are politically motivated, and protectionism is flourishing," Putin said.

India's Prime Minister Narendra Modi said his country aims to be a $5 trillion economy by 2024, up from 2.6 trillion in 2018. He said that BRICS targets for investment and trade must be more ambitious and welcomed suggestions to further reduce trade costs.

A meeting between Bolsonaro and Xi earlier in the day showcased how far relations have come since last year. Bolsonaro repeatedly bashed China in the lead up to last October's elections in Brazil, creating concerns that he could disrupt BRICS, one of the world's biggest trading partnerships.

China's growing presence had made it a target for Bolsonaro's nationalist rhetoric, including a repeated complaint: "The Chinese are not buying in Brazil. They are buying Brazil."

Since he took office, diplomats and business leaders in both countries have persuaded Bolsonaro to tone down his anti-China rhetoric.

"We want to more than expand, we want to diversify our trade relationship," Bolsonaro said at the event with Xi.

While diplomatic ceremonies highlighted common ground, not far across town a dispute over the Venezuelan embassy dredged up differences on one of Latin America's most pressing issues.

Supporters of Maduro and Guaido came to blows on Wednesday after representatives for Guaido entered the embassy in Brasilia in what Venezuela's foreign minister called a forceful invasion. The Brazilian government persuaded them to leave after 11 hours.