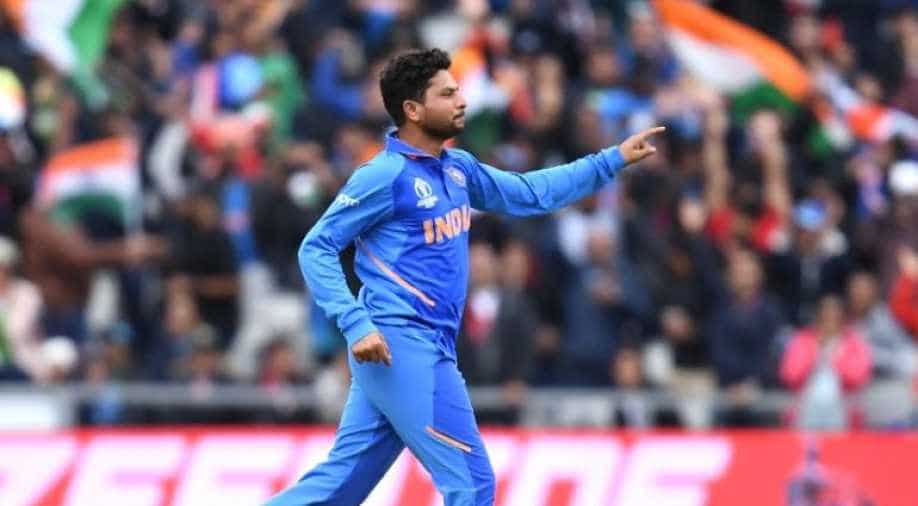 India's Kuldeep Yadav admitted bowling Pakistan batsman Babar Azam in the World Cup with a magical delivery that tossed and turned was a "dream" for any spinner.

Yadav returned figures of 2-32 with his left-arm wrist spin to play a key role in India's 89-run victory via DLS over arch-rivals Pakistan in Manchester on Sunday.

Yadav got Azam bowled through the gate - the ball nipping between bat and pad - for 48 to end a 104-run second wicket stand involving Fakhar Zaman, who top scored with 62.

"Getting Babar Azam out was the best delivery for me in this tournament. I got him out in the Asia Cup as well," Yadav told reporters.

"After the rain break, I went back and watched that delivery. It had drift and turn, so any spinner will love that delivery. It's a proper dream delivery and a proper Test delivery. Deceiving the batsman in the air and making him commit the mistake. A perfect delivery," he said with a smile.

He struck again in his next over to send the left-handed Fakhar packing after the batsman played against the spin to give away a catch at short fine leg.

Vijay Shankar and Hardik Pandya also took two wickets each to restrict Pakistan to 212 for six in a failed chase for their revised target of 302 in 40 overs.

"Both Babar Azam and Fakhar Zaman play spin well. They were rotating the strike and were attacking, so it was important to break that partnership," said Yadav.

"Getting Babar out and then another wicket put them under pressure and according to DLS they needed a very high run-rate and that was a plus point for us," he said.

Pundits had raised doubts about Yadav's performance in the World Cup after coming off an ordinary show in the Indian Premier League Twenty20 tournament.

But the 24-year-old spinner has held his own with 1-46 against South Africa and a breakthrough performance against Pakistan.

"Everyone is talking about my rhythm. I don't think I lost my rhythm. It happens when you don't pick wickets but the last three games I have bowled really well," he said.

"In the game against Australia they were struggling to hit me and that's important for any spinner," Yadav added.

India vice-captain Rohit Sharma stood out with his 140 off 113 deliveries during India's 336 for five in 50 overs.

But Sharma was quick to praise Yadav for his key strikes in the Pakistan innings.

"He's our match-winning bowler in that middle over the phase, and today also you saw how important those crucial wickets were," said Sharma.

"Both the batsmen were set. Of course, he didn't start the tournament the way he would like to, but for us as a group around him, our job is to just make sure that he gets that confidence, he gets that backing from the team," Sharma added.