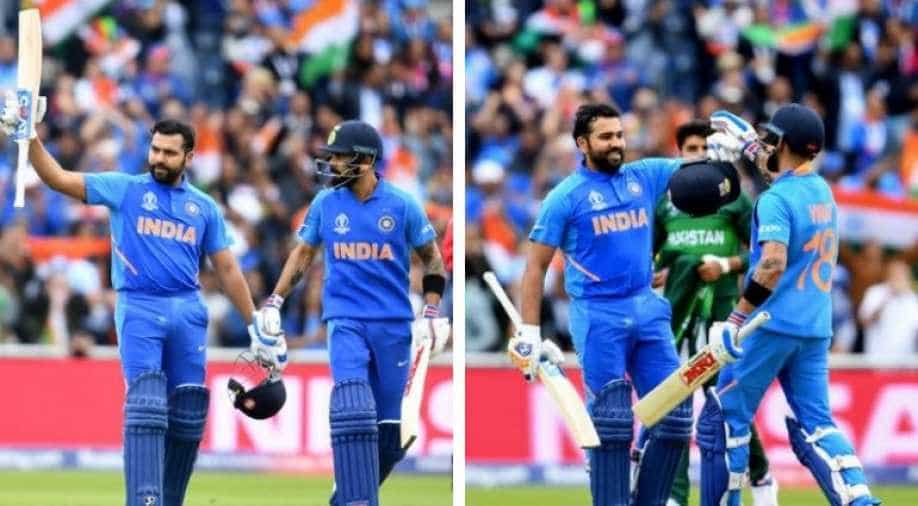 Rohit Sharma scored his second hundred in three innings as India maintained their unbeaten record against Pakistan at the World Cup with an 89-run win under the Duckworth-Lewis-Stern method on Sunday.

Sharma's 140 was the centrepiece of a total of 336-5 that also featured captain Virat Kohli's 77.

Victory in this rain-curtailed clash saw India, who have now won all seven of their World Cup matches against Pakistan, remain unbeaten after four pool games at this year's edition.

"We have played good cricket, if you focus on this game too emotionally things can get haywire," Kohli said.

"We cannot approach it like fans, as cricketers you have to understand what needs to be done on the field.

"Rohit's knock was outstanding but to get to 330 you need a team effort and that is exactly what happened."

Pakistan, whose only 2019 pool win so far was a shock defeat of hosts England, were never truly up with the rate in the showpiece match of the 10-team round-robin stage.

In pics: Best moments from India's innings against Pakistan in World Cup match

They still had hope at 117 for one even though the most made by any side batting second to win a World Cup match is Ireland's 329 for seven against England at Bangalore in 2011.

But Kuldeep Yadav then struck twice to spark a collapse that saw Pakistan lose four wickets for 12 runs in 18 balls as they slumped to 129 for five in 27 overs -- long past the 20-over cut-off point needed for a result under D/L.

"Kuldeep is a wicket-taker. The ball to get Babar Azam was brilliant. A very important moment in the game," Kohli added.

A third rain stoppage came with Pakistan 166-6 off 35 overs.

The match then descended into something of a farce when play resumed under leaden skies, with Pakistan requiring an outlandish 136 more runs in five overs to reach a revised victory total of 302 in 40 overs.

That target which, eventually became 94 off the last six balls, unsurprisingly proved beyond them as Pakistan finished on 212-6, dealing a major blow to their semi-final hopes.

Criticised for opting to bowl first, Pakistan captain Sarfaraz Ahmed said: "We had a plan to pitch it up but we didn't hit the right areas.

"We didn't capitalise on winning the toss and conceded too many runs. We lost so many wickets in two or three overs and that is what cost us the match.

"It is tough. We have four matches left and we will try our level best to win them all."

Bhuvneshwar Kumar limped off in the fifth over of Pakistan's chase with a hamstring injury that sidelined him from the rest of the match, with Kohli admitting the India paceman will out for a "maximum" of three matches.

Vijay Shankar, completing Kumar's over, struck first ball when he had opener Imam-ul-Haq lbw for seven.

Fakhar Zaman (62) and Babar Azam (48) repaired the damage with a century stand, before they both fell to Yadav as they tried to up the tempo. 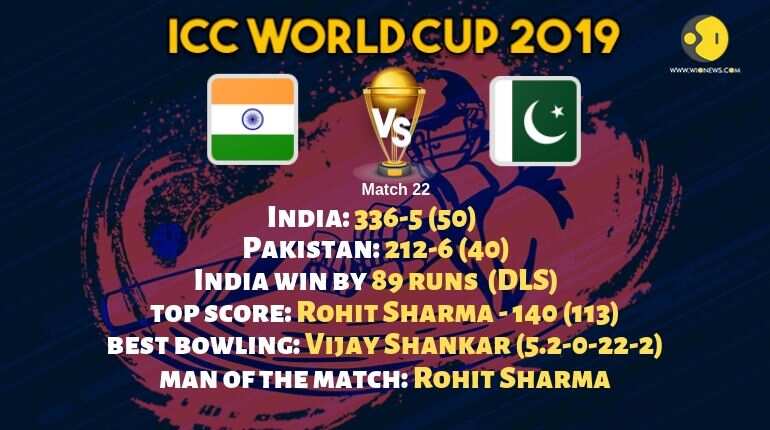 Babar was bowled between bat by a superb delivery before Zaman miscued a sweep to short fine leg.

Mohammad Hafeez was caught at deep square leg before Shoaib Malik played on for his second successive duck -- a wicket greeted with huge roars by the massed ranks of India fans in a capacity crowd, with an estimated one billion watching on television.

Meanwhile, Pakistan left-arm quick Mohammad Amir continued his fine form with 3-47 despite two early warnings for running on the pitch.

But not even Amir could stop Sharma and KL Rahul (57) marking their first ODI match as a opening duo with a stand of 136.

Sharma went to fifty with a six over long-on and a cut four off successive deliveries from recalled leg-spinner Shadab Khan.

His single off Shadab saw Sharma to an 85-ball hundred including three sixes and nine fours.

But a quickfire stand of 98 with Kohli ended when Sharma, trying a needlessly extravagant scoop, flicked Hasan to short fine leg.

Kohli, 71 not out at the start of a 55-minute rain break, fell soon after the resumption when, trying to hook Amir, he 'walked' for a catch behind by wicket-keeper Sarfaraz despite replays appearing to show he didn't hit the ball.