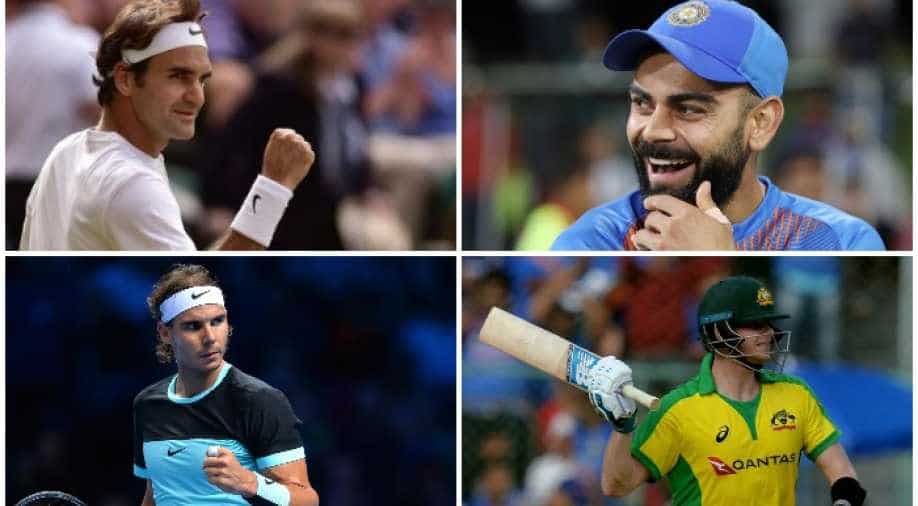 AB de Villiers has given his take on the rivalry between Virat Kohli and Steve Smith as he compared the duo with tennis legends Roger Federer and Rafael Nadal respectively.

There has been a lot of debates surrounding who is a better batsman between Virat Kohli and Steve Smith. While many former cricketers and experts have hailed Kohli as a better player across formats, others have chosen Smith as the close winner in the race. Now, former South African skipper AB de Villiers has given his take on the rivalry between Kohli and Smith as he compared the duo with tennis legends Roger Federer and Rafael Nadal respectively.

While de Villiers didn’t clearly pick his favourite, Mr. 360 did state that Kohli is a more natural striker of the ball.

“It’s a difficult one, but Virat is definitely the more natural ball-striker, there’s no doubt about that,” de Villiers said during his interaction.

“In tennis terms, I’d say he’s more like a (Roger) Federer whereas Smith is like a (Rafael) Nadal. Smith is mentally very strong and figures out a way of scoring runs - he doesn’t look natural, but he ends up writing records and doing amazing things at the crease. “I think mentally; Smith is one of the best I have ever seen. Virat has also scored runs all over the world and won games under pressure,” de Villiers, himself a modern-day great, said.

However, de Villiers was pushed to backfoot when a fan asked him to choose his favourite between Kohli and Sachin Tendulkar. The swashbuckling batsman picked Tendulkar in a jiffy as he said for both him and Kohli, Tendulkar is like a role model and the Master Blaster had set standards for other batsmen to follow. However, de Villiers stated Kohli is the best ever when it comes to chasing a total.

"Sachin for both (him and Kohli) of us is like a role model. The way he stood out back in the day in his era and the things he achieved and with the grace he did all of that, it's a great example for everyone. I think Virat will also say that he's (Tendulkar) the main guy, he's the dude. He set the standards for guys like us to follow. Personally for me, especially in a chase, I'd say Virat is the best I've ever seen in my life. There's no-one that beats him when it comes to... the opposition scores 330 and you've got to go chase it down," he said.

"Sachin was amazing in all formats, all sorts of situations but Virat tops him there when it comes to chasing under pressure. For me, that's where I rate sportsman, when it comes to tennis, golf... the Tiger Woods of the world. When the heat is really on you feel like your whole body is numb, but he (Kohli) stands up and he does amazing things. That's what Virat does under pressure," de Villiers added.