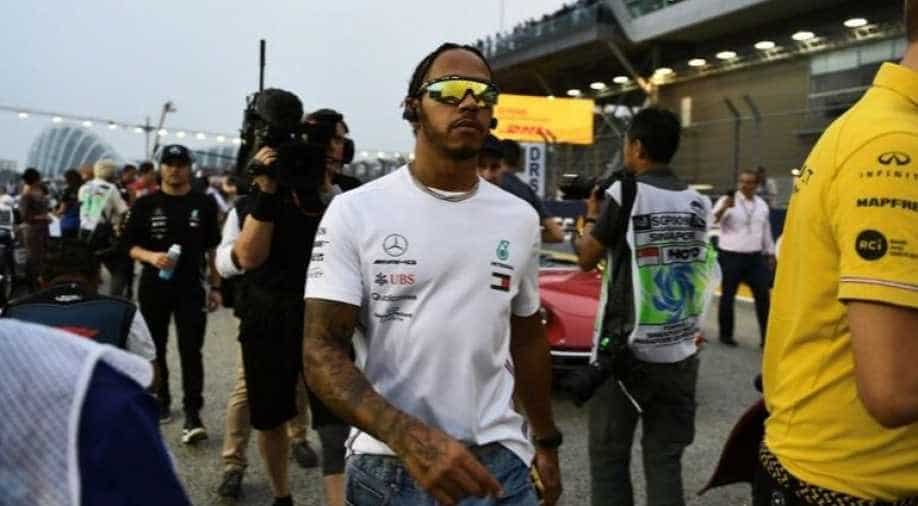 World champion Lewis Hamilton felt Mercedes had the car to win the Singapore Grand Prix on Sunday but strategic errors in the middle of the race cost him a chance of victory as the championship leader had to settle for a fourth-place finish.

Hamilton started alongside pole-sitter Charles Leclerc on the front row with the second Ferrari of Sebastian Vettel and Red Bull's Max Verstappen behind him.

After fighting off Vettel to slot in behind Leclerc on the opening lap, Mercedes opted to keep Hamilton out for longer than his rivals rather than attempt an undercut to claim the lead, but the plan backfired when he emerged from his pit stop behind the Ferraris and the Red Bull.

"It's not been the weekend we wanted at all. I was all over Charles in the first stint and I think we had the pace to win the race today," Hamilton told reporters after the Grand Prix finished with a Vettel-Leclerc Ferrari one-two and Verstappen completing the podium.

"We discussed the possibility of the undercut in the strategy meeting this morning and I wanted to take the risk but then Ferrari decided to box (pit), so we did the opposite and I stayed out.

"I pushed hard and the tyres were feeling good, but after a few laps they started to drop off real quick. We made mistakes tonight, but in this team, we win and we lose together.

"We don't point the finger at people, that's always been our philosophy and that won't change because of one race.

"We're fighting a Ferrari team who are super hungry and pushing very hard," he added of the Italian outfit, who have now won the last three races.

"It's on each one of us to do a better job. I believe we're the best team, but we've got to push on. We'll debrief tonight, put our heads back in the scrum, and then come back fighting at the next race."

Team principal Toto Wolff felt Mercedes could have made better calls during the race.

"The undercut was more powerful than everyone expected and it would have been the right strategy call for us," he said of the decision to keep Hamilton out for seven laps longer than the other front runners.

"Once we had missed the chance for the undercut, we were hoping to create some opportunities later in the race by offsetting our tyres, but that plan didn't work," he added.

"I think we had a car capable for pole yesterday and we had an opportunity to win today, but we made too many mistakes. We're aware that we didn't deliver to the standards that we set ourselves this weekend, so we will review it and see where we can improve for Russia."

Despite the disappointing result, Hamilton still extended his lead over Mercedes team mate Valtteri Bottas, who was fifth, to 65 points with six rounds remaining.