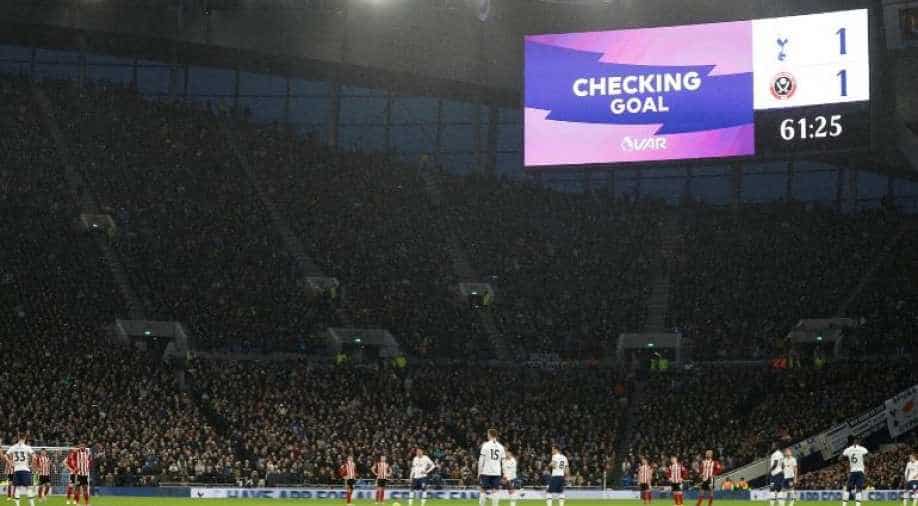 The use of VAR, match officials who use technology to review certain decisions made by the referee, has been surrounded by controversy over the last few months.

Soccer's rule-making body IFAB is to look at ways of providing more information during matches about Video Assistant Referee (VAR) decisions, it said following a meeting on Tuesday.

The use of VAR, match officials who use technology to review certain decisions made by the referee, has been surrounded by controversy over the last few months.

Some fans say the system goes far beyond its original remit, which involved only reviewing the most glaring mistakes, and that decisions are taking too long.

The International Football Association Board (IFAB) said in a statement that its members had agreed to "explore different communication options to improve the understanding of the decision-making process".

It recognised that there was a "growing demand for more immediate information about the referee’s final decisions after a VAR-review."

In some leagues where VAR is used, screens in the stadium indicate that a VAR review is taking place and then relay the decision but with only minimal information such as "No goal".

There have been several cases where a goal has been officially announced in the stadium, the players have celebrated and the ball is back in the centre circle ready for kickoff only for a VAR review to take place.

Napoli coach Carlo Ancelotti complained recently that it was often difficult to know whether the VAR or the pitch referee was in charge of a match.

IFAB said the meeting received "positive feedback" on the changes to the laws, including a handball rule, which were introduced in June, even though, like VAR, this has been subject to much criticism.

It also agreed to set up an "expert group" to look into whether the rules need to be changed to allow for better treatment for players who suffer concussion.

The group will look a new ways of assessing concussion during a match and how to deal with it, "taking into consideration all potential resulting consequences, with player safety at the forefront".

At present, referees must stop the match in cases of suspected concussion to allow the examination of the injured player who can only return to the game with permission from the team doctor.

However, world players' union FIFPro says this does not go far enough. It wants players to be looked at by a neutral doctor and temporary substitutions to be allowed for up to 10 minutes while the examination takes place.

IFAB's annual general meeting on February 29 will decide which proposals will be incorporated into the rules.