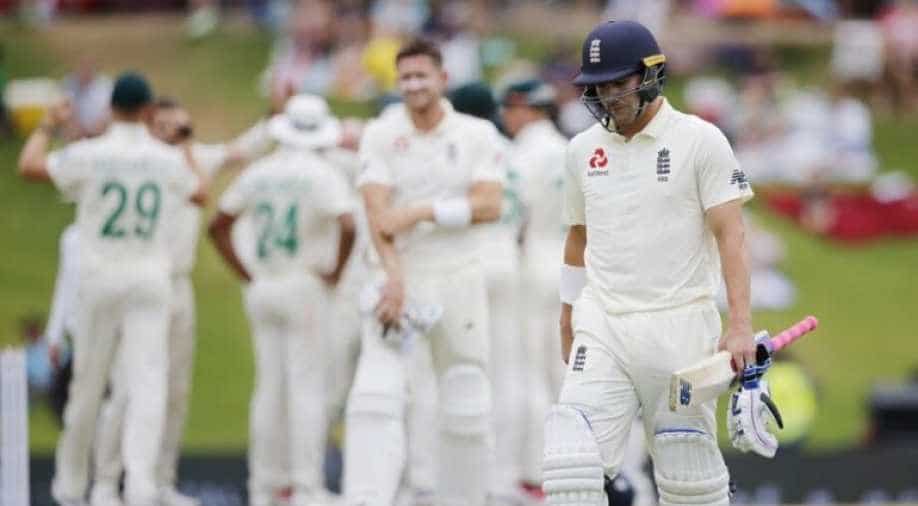 File Photo: England's Rory Burns walks back to the pavilion after his dismissal by South Africa's Anrich Nortje during the fourth day of the first Test cricket match between South Africa and England at The SuperSport Park stadium at Centurion near Pretoria on December 29, 2019. Photograph:( Reuters )

Rory Burns injured his ligaments on Thursday trying to kick a football away as his captain Joe Root bore down on him.

In an age of sports science, expert physical conditioning and meticulous planning, watching Test cricketers clumsily kick a soccer ball around as they warm up defies belief.

Not only because they look as if they are going hurt themselves, but because that is often what happens as their child-like enthusiasm for a kick-about clash with the tenets of professional sport.

The latest casualty is Rory Burns, England's opening batsman who top-scored in the first Test against South Africa but who will now return home with a serious ankle injury, missing out on the rest of the four-match series.

He hurt ligaments on Thursday trying to kick the ball away as his captain Joe Root bore down on him.

It came only 24 hours after Ollie Pope had taken angry exception to a crunching tackle from teammate Matt Parkinson that in a real game of football might have earned the leg spinner a red card.

"If you look at what football does, the benefits from a psychological and fun point of view are outstripped by the dangers from it, but we will discuss that. I am not coming in with an iron rod right now," said Ashley Giles -- a year ago when he was appointed the new England director of cricket.

But England have now added yet another name to a growing list of soccer casualties.

Just over a year ago, Jonny Bairstow lost his place as wicketkeeper on a tour of Sri Lanka after damaging ankle ligaments in a kick-about.

A decade ago, then England coach Andy Flower banned the warm-up soccer routine after Joe Denly damaged a knee because of an unwieldy tackle before a one-day international match against Australia at The Oval.

Like Bairstow, Denly is on tour in South Africa and might have offered some caution, as might have James Anderson, who turned his ankle playing soccer on tour in New Zealand in 2008.

Opponents South African can relate. Ace bowler Vernon Philander was out for eight months after he damaged his ankle in a pre-match kick-about in India.

But South Africa also still continue to play an awkward version of a rondo, where a few players in the middle of a circle of others try to intercept a soccer ball being passed between the players on the outer ring.

Australia's culture is reflected in their choice of touch rugby rather than soccer to get the blood flowing.

But this proved even costlier. In was during such a game that Glenn McGrath stood on a stray cricket ball left on the outfield at Edgbaston and ripped the ligaments in his right ankle, changing the course of the Ashes in 2005.