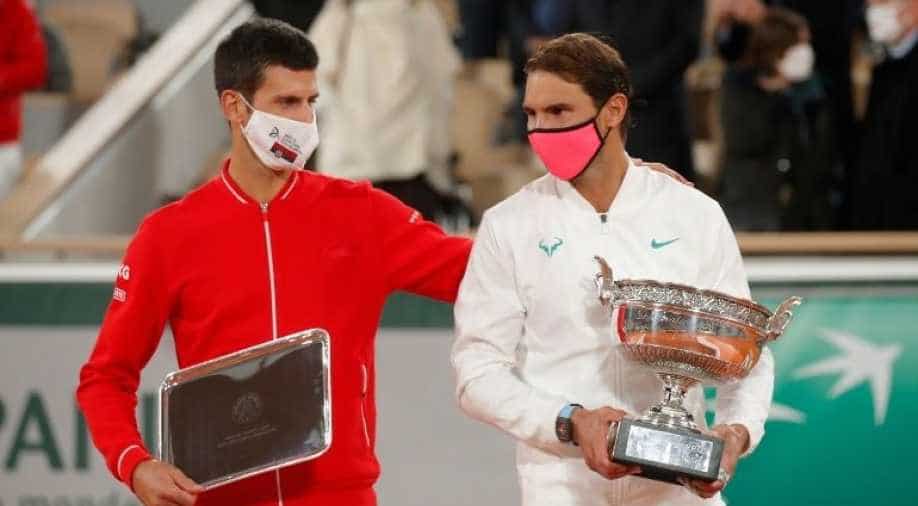 On Sunday, Djokovic again felt the full, raw power of Nadal on clay as the Spaniard clinched a 10th Italian Open title with a 7-5, 1-6, 6-3 win in the final.

Novak Djokovic admitted Sunday that he's "a long shot" to win Roland Garros where he would likely have to dethrone rival and 13-time Paris champion Rafael Nadal.

Djokovic may be world number one, but it's Nadal who is the undisputed king of clay in the French capital where he has lost just twice in 102 matches since 2005.

On Sunday, Djokovic again felt the full, raw power of Nadal on clay as the Spaniard clinched a 10th Italian Open title with a 7-5, 1-6, 6-3 win in the final.

In the pair's 57th meeting, the victory also took Nadal level with his Serb rival on 36 Masters 1000 titles.

"Going into Paris brings me a good sensation," insisted Djokovic despite a roller-coaster clay court swing which yielded a round-of-16 exit in Monte Carlo and a semi-final loss on home ground in Belgrade.

Nadal, by comparison, has two titles in Rome and Barcelona but sobering quarter-final losses in Monte Carlo and Madrid.

"I actually now started to feel like I actually want to feel on clay," added Djokovic.

"So I think if I manage to play the way I played last night (against Lorenzo Sonego in a three-set semi-final) and today, I think I have a good chance to go all the way in Paris.

Djokovic has 18 Grand Slam titles to his name -- two behind the record of 20 shared by Nadal and Roger Federer.

However, only one of those has been captured at Roland Garros, in 2016 when Nadal withdrew with a wrist injury after the second round.

Djokovic was swept aside by Nadal in the 2020 final.

Before that, he had lost three other finals in Paris, two also to Nadal and one against Stan Wawrinka.

However, Djokovic still has a place in the record books to target as he hopes to become the first man in over half a century, and just the third in history, to win all four majors more than once.

Also, he remains just one of two men to beat Nadal at the French Open, in the last-eight in 2015.

For Nadal, Roland Garros, which gets underway on May 30, means a chance for a 14th Paris title and record 21st Grand Slam crown.

"This had been one of the first important titles I won in my career. I'd won 10 in Monte Carlo, Barcelona and Roland Garros and really wanted this one too."

Djokovic will play on home clay again in Belgrade the week before Roland Garros.

Nadal will head home to Mallorca to fine-tune his game.

"I think I have been improving this week, but I need to keep going with that improvement," he said Sunday.

"When you improve and you're able to do it every day for a longer time, then you feel more confident and more safe."