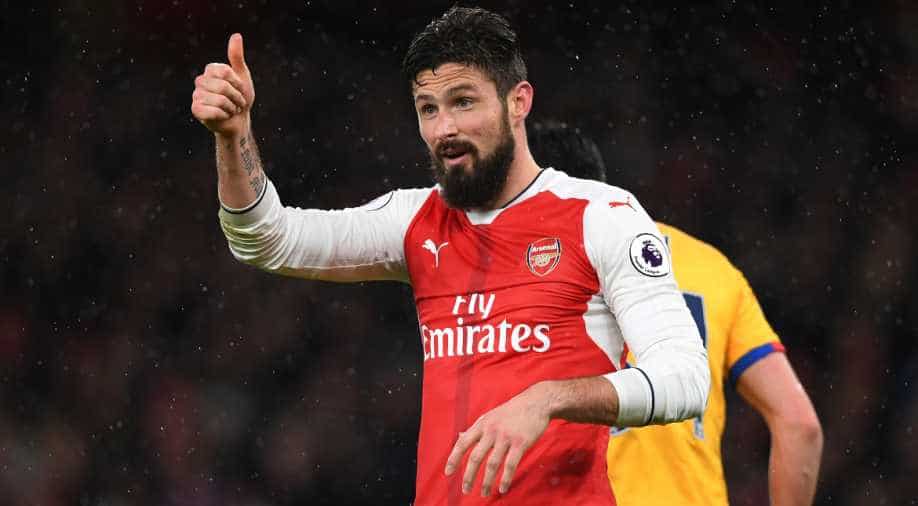 Frenchman Giroud connected with Alexis Sanchez's cross with a scorpion-like backheeled volley 17 minutes into his side's derby against Crystal Palace while Alex Iwobi made it 2-0 with a second-half header. Photograph:( Getty )

Frenchman Giroud connected with Alexis Sanchez's cross with a scorpion-like backheeled volley 17 minutes into his side's derby against Crystal Palace while Alex Iwobi made it 2-0 with a second-half header.

Arsenal had started the game outside the top four after Tottenham's 4-1 rout of a feeble Watford briefly lifted Mauricio Pochettino's side into third place in the table.

Kane scored Tottenham's first two goals, both from assists by right back Kieran Trippier, while Dele Alli made the points safe after some woeful Watford defending shortly before the break. Alli grabbed his second immediately after the interval.

At the halfway point of the season Chelsea, who on Saturday equalled Arsenal's 2001-02 record of 13 consecutive wins in the same Premier League campaign, have 49 points from 19 games.

Liverpool have 43 while Arsenal have 40, one more than Tottenham who are above Manchester City on goal difference. Manchester United complete the top six below which there is a yawning nine-point gap to seventh.

The Holiday fixtures continue thick-and-fast over the coming days with Chelsea aiming to set a new record of 14 consecutive wins when they visit in-form Tottenham on Wednesday.

Liverpool are at Sunderland on Monday when Manchester City host Burnley, while Arsenal are at Bournemouth on Tuesday.

Whatever happens in the weeks ahead though, few goals are likely to be replayed as much as Giroud's stunning opener.

Having played a neat flick early in a liquid Arsenal counter-attack, Giroud rumbled forward into the area. Sanchez's cross was not the best, falling a little behind the Frenchman, but he jack-knifed his body as he tumbled forward, connecting with his left heel.

The ball soared past diving Palace keeper Wayne Hennessey and bounced down and in off the underside of the crossbar.

"I tried to take it on the back heel from behind me and I had some luck," said Giroud, who has struggled to earn a starting berth this season.

"It was about luck, I didn't have good balance but it was a great feeling," added Giroud whose goal was similar to Henrikh Mkhitaryan's for Manchester United on Boxing Day but from further out.

"It was nice for the me and the team and was my best one."

Arsenal manager Arsene Wenger added: "I have been a bit spoiled over the year by the exceptional quality of the players I've had, but it will be remembered as an exceptional goal.

"Olly is very good in front of goal, but I've never seen this kind of goal from him."

He opened the scoring in the 27th minute with a cool finish having been played in by Trippier and then showed his poaching instinct to connect with the fullback's inviting cross.

Alli punished Younes Kaboul's weak clearance and made it 4-0 as Tottenham ran riot in the rain.

"The first half was one of the best we've played this season," said Spurs boss Mauricio Pochettino whose side go into the Chelsea game buoyed by four successive wins.