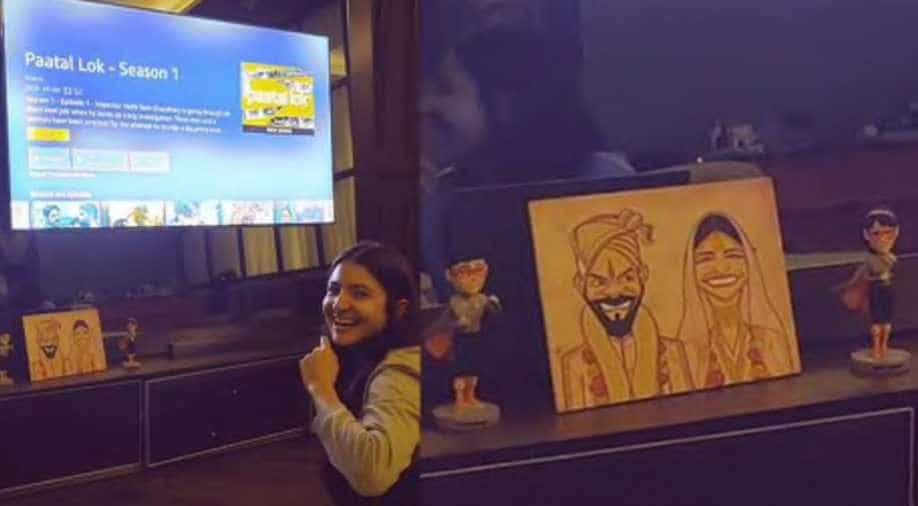 While Anushka Sharma must be beaming with happiness on the critics’ and audience review to her recently released web series on Amazon Prime titled ‘Paatal Lok’, here is something to add to that smile!

The Bollywood actress shared a picture late last night when the show started streaming on Amazon Prime, one in which she was captured possibly by her husband Virat Kohli. Anushka was seen sitting on the floor as her TV streamed ‘Paatal Lok’ season one. Read our review of 'Paatal Lok' here.

While ‘Paatal Lok’ has gained a strong buzz, what has caught the attention of many of her fans, is the wedding photo of the couple, placed right under the TV. It is basically a sketch of Anushka Sharma and Virat Kohli from their wedding.

Soon after the picture was posted, a fan wrote, “The photo below the TV set.” Another commented, “Woh nice caricatures, awww.” One more wrote, “Shaadi ka tasveer mast hai (the wedding picture is awesome).”

Anushka and Virat had tied the knot on December 11, 2017 in a private wedding ceremony in Italy. Only a few close family members and friends attended the ceremony.