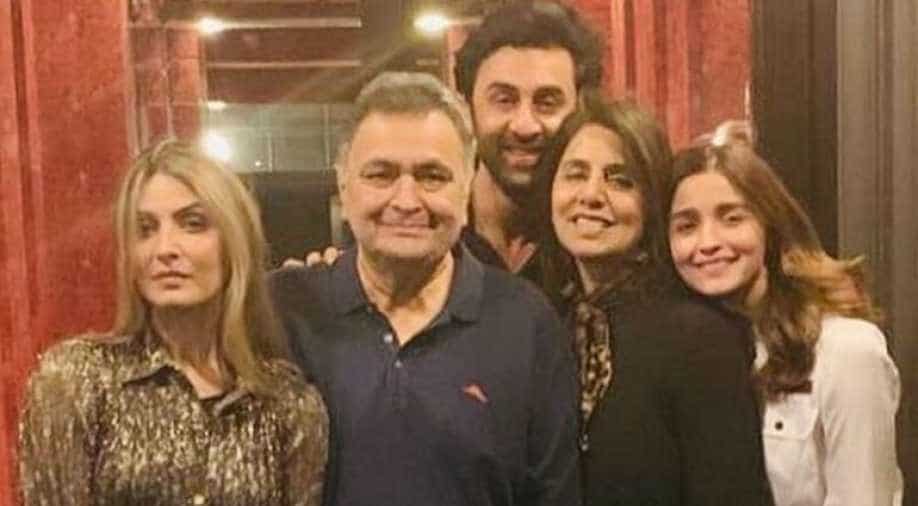 " A friend, a Chinese food lover and a beautiful story teller,"- that's how actress Alia Bhatt described the late veteran actor Rishi Kapoor while paying him a tribute on Thursday evening.

A regular Thursday morning turned one of shock as the nation woke up to the news of Rishi Kapoor`s death after a two-year-long battle with leukemia. And during such difficult time, Alia has been seen standing like a pillar with the Kapoor family. Alia is dating Rishi's son, Ranbir Kapor.

The actress was clicked on Thursday as she rushed to the hospital where Kapoor was admitted and was seen consoling Ranbir and his mother Neetu Kapoor during the funeral rites.

After the creamtion was over she took out a moment to mourn the demise of Rishi Kapoor on social media. She posted an emotional note for him, saying he brought goodness in her life.

"What can I say. About this beautiful man... who brought soo much love and goodness into my life. Today, everyone speaks of the legend that is Rishi Kapoor... and though I`ve known him like that all my life... for the past two years I`ve known him as a friend, a fellow Chinese food lover, a total cinema lover, a fighter, a leader, a beautiful storyteller, an extremely passionate tweeter and a father!"

Alia has shared that she has received immense love from Rishi Kapoor over past two years.

"In these past two years the love I have received from him is like a warm hug that I will always cherish! I thank the universe for giving me this opportunity to know him... today probably most of us can say he is like family - because that`s how he made you feel! Love you, Rishi Uncle! Will miss you forever! Thank you for being you," Alia penned.

Along with her post, she posted a picture of little Ranbir in the arms of Rishi Kapoor. "Beautiful boys," she captioned the image.

Rishi`s wife Neetu Kapoor reacted to the photograph by commenting red heart emojis on it.

As Riddhima couldn't make it to dad Rishi Kapoor's funeral, this is how Alia Bhatt helped

Alia has woked with Rishi Kapoor in the film 'Kapoor & Sons'. She and Ranbir will be seen together in Ayan Mukherji's 'Brahmastra'.