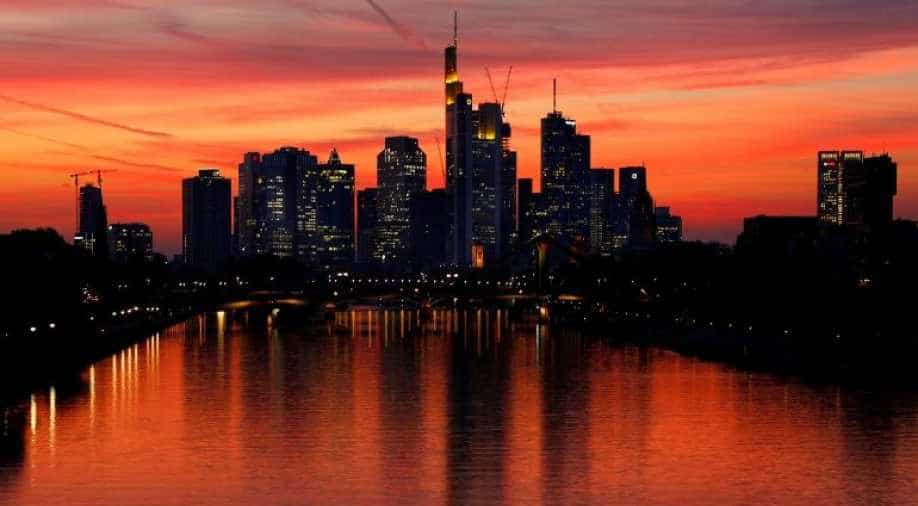 The skyline with its financial district is photographed early evening in Frankfurt, Germany. Photograph:( Reuters )

German growth contracted in the second quarter on slumping exports as a global trade war, China's slowdown and Brexit uncertainty sapped confidence, dealing a blow to an export-focused economy.

The German economy could have continued to shrink over the summer as industrial production drops amid a dearth of orders, the Bundesbank said on Monday, suggesting that the euro zone's biggest economy is now in a recession.

German growth contracted in the second quarter on slumping exports as a global trade war, China's slowdown and Brexit uncertainty sapped confidence, dealing a blow to an export-focused economy.

"The main reason for this is the continuing downturn in the industry," the central bank said, pointing to a significant decline in orders and a big drop in sentiment indicators for manufacturing firms.

While domestic consumption continues to isolate the economy, the jobs market is already showing signs of weakness and confidence in the services sector is also dropping, the Bundesbank added.

Still, the construction boom is likely to continue, providing some support.

While Germany has so far rejected the idea of boosting public spending to offset the slowdown, Finance Minister Olaf Scholz said that Berlin has the financial strength to counter any future economic crisis "with full force".

Speaking on Sunday, Scholz said the global financial crisis in 2008/2009 had cost Germany roughly 50 billion euros and the government could again muster such a sum, if necessary.

Obsessed with running a balanced budget, Germany has produced surpluses for years, ignoring calls for more spending to boost growth.