Yen and bond bulls charge on as share markets falter 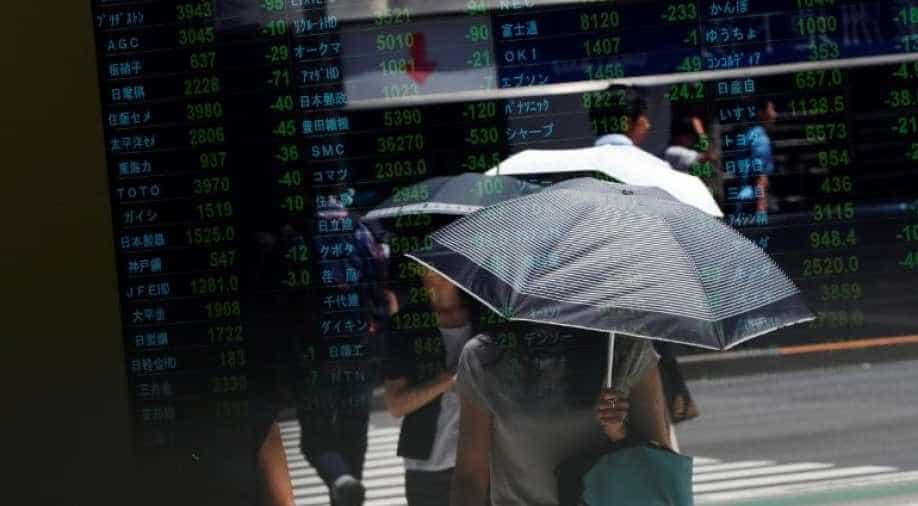 Passersby are reflected on a stock quotation board outside a brokerage in Tokyo, Japan. Photograph:( Reuters )

Early gains for Europe's main bourses had quickly disappeared and Wall Street futures were already in the red after Asia-Pacific had also finished lower overnight.

Yen and bond bulls charged on Monday while stocks struggled again, amid ongoing worries that a prolonged US-China trade war and damaging Brexit could tip-top economies into recession.

Early gains for Europe's main bourses had quickly disappeared and Wall Street futures were already in the red after Asia-Pacific had also finished lower overnight.

That was despite a more than 1% rally for Chinese stocks after the yuan had avoided further drama and financial regulators there had relaxed margin financing rules late on Friday.

Safety remained the name of the game.

FX harbour, the Japanese yen, hit its highest in nearly a year and a half at 105.32 yen against the dollar and gained against the euro and Brexit-bruised British pound too.

"Risk indicators and global markets have become shakier and the yen is reflecting those concerns, and safe-haven shelters like the yen and the Swiss franc should continue to benefit," said Commerzbank currency strategist Esther Reichelt.

In bond markets, the demand for guaranteed income was also unrelenting.

A rally in Italy's debt gave it an extra boost after Fitch kept country's rating steady despite the prospect of snap elections in the euro zone's third-biggest economy now looming.

There were signs that League leader Matteo Salvini's call for those snap elections was facing mounting resistance from other parties whose support will be needed for the plan to succeed.

"Fitch kept Italy's rating unchanged and some market participants may be betting that a snap election could be delayed," said DZ Bank rates strategist Sebastian Fellechner, referring to the fall in yields.

Economists are also watching for a batch of global data this week.

Goldman Sachs became the latest to cut its US growth forecast at the weekend, warning that a US China trade deal now looked unlikely before the 2020 US presidential election.

One week ago, China allowed the yuan to break through the key 7-per-dollar level for the first time since 2008, prompting Washington to label Beijing a currency manipulator and sparking market ructions.

The International Monetary Fund said on Friday that it stood by its assessment that the value of China's yuan was largely in line with economic fundamentals.

On Friday, Wall Street snapped a three-day winning streak after US President Donald Trump said Washington was continuing trade talks with Beijing, but that the U.S. was not going to make a deal for now.

Those comments helped to drive a late sell-off in a volatile session that saw the Dow Jones Industrial Average fall 0.34%, the S&P 500 lost 0.66% and the Nasdaq Composite dropped 1%.

White House trade adviser Peter Navarro subsequently said that the United States was still planning to hold another round of trade talks with Chinese negotiators.

Wall Street futures were down 0.5%.

In commodities, oil prices dipped on growth and trade worries, having risen sharply on Friday on a drop-in European inventories and production cuts by the Organization of the Petroleum Exporting Countries.

US West Texas Intermediate (WTI) CLc1 futures were at $53.89 per barrel, down 61 cents from their last close.

Both benchmarks fell last week, with Brent losing more than 5% and WTI falling about 2%.

"Despite the laundry list of disruptions and additional barrels at risk, investor length is currently near a multi-year low."

Argentina's markets were ready for a slump too after voters soundly rejected President Mauricio Macri's austere economic policies in primary elections at the weekend, raising serious questions about his chances of re-election in October.