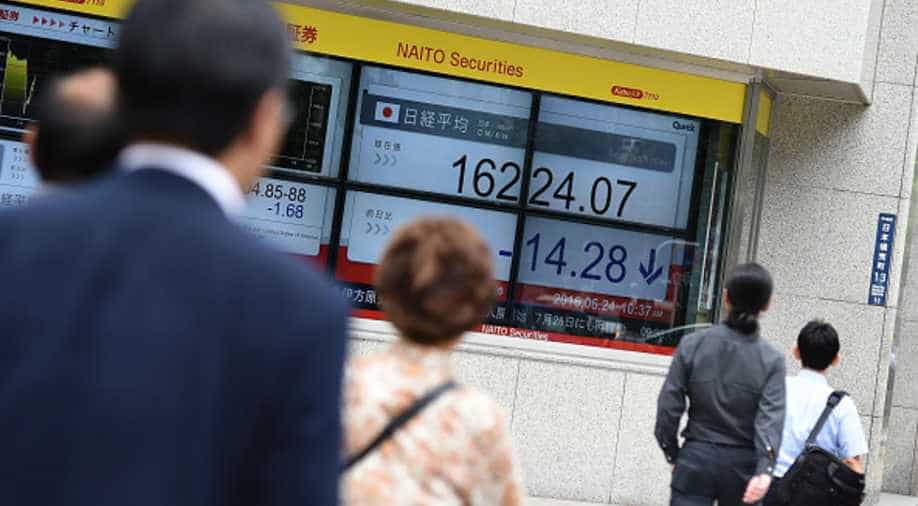 Tokyo ended the morning 0.1 per cent higher, Shanghai added 0.1 per cent and Sydney rose 0.5 per cent but Hong Kong and Singapore each slipped 0.6 per cent.

Asian markets were mixed Tuesday as dealers focused on crunch G20 talks between Donald Trump and Xi Jinping, with the US president warning he will ramp up his trade war with China if the two do not reach a deal.

With the economic superpowers in the middle of an increasingly bitter standoff, there are hopes the two leaders will be able to work out an agreement that brings them back from the brink of a tariffs row that threatens to dent global growth.

In an interview with the Wall Street Journal published Monday, Trump said he thought it "highly unlikely" the US would hold off more than doubling duties on $250 billion of Chinese imports if there is no breakthrough.

"If we don't make a deal, then I'm going to put the $267 billion additional on," he told the newspaper, referring to the remainder of Chinese imports that so far have not been hit with tariffs.

"The only deal would be China has to open up their country to competition from the United States."

While some observers suggested the comments were a typical Trump ploy to apply maximum pressure on Beijing heading into the meeting, there remain fears about what the tycoon has in mind.

"It doesn't sound like we will see Donald the Deal Maker but instead Trump the Trade Warrior at G20," said Stephen Innes, head of Asia-Pacific trade at OANDA.

Asian traders moved cautiously in early exchanges after Monday's global rally, which was fuelled by rising oil prices, Italy's softer tone in its budget standoff with Brussels and Britain's Brexit agreement with the European Union.

Tokyo ended the morning 0.1 per cent higher, Shanghai added 0.1 per cent and Sydney rose 0.5 per cent but Hong Kong and Singapore each slipped 0.6 per cent.

Seoul and Wellington both added 0.3 per cent but Taipei shed 0.6 per cent and Manila gave up 0.5 per cent.

While the meeting is the main event this week, investors are also keeping an eye on speeches from top Federal Reserve officials including boss Jerome Powell, which could signal a softer pace of interest rate hikes.

Rising US borrowing costs -- fuelled by surging US growth -- have been a major cause of concern for investors but recent comments from the central banker appear to show a more dovish outlook for 2019 as the global economy slows.

On oil markets both main contracts remained under pressure despite Monday's jump, with market-watchers waiting for next month's gathering of OPEC and non-OPEC members hoping they will announce a cut in output.

The commodity has been hammered since early October by a series of issues including the uncertain global outlook, the trade war, rising supplies, slowing demand and weakness in China.

As trade tensions begin to bite on the global economy, analysts are predicting slower growth into next year, meaning there would be less demand for oil.

"It has been our long-held view that slower global economic activity would be a factor weighing on oil demand in 2019 and that the market would move into surplus," London-based Capital Economics said.