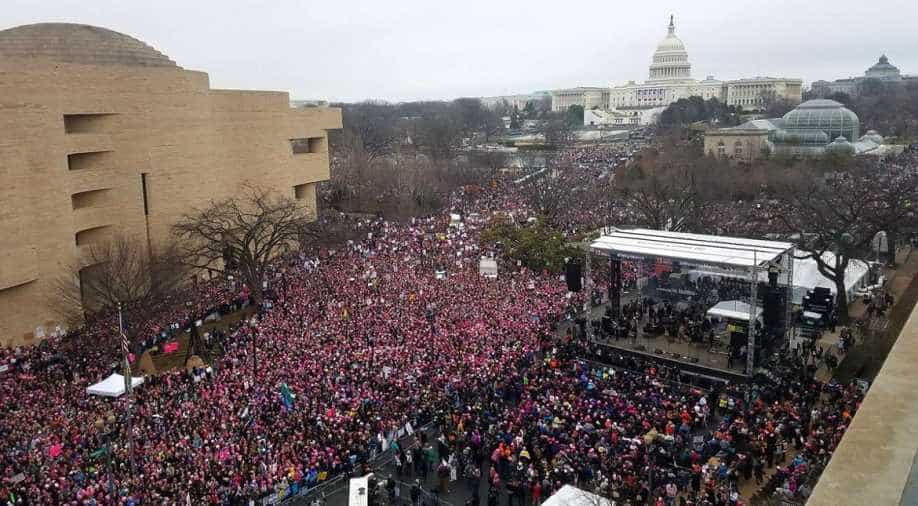 Women made up the overwhelming majority of the people. The movement has been powered by social media. Photograph:( Twitter )

Women in pink "pussyhats" flooded into Washington by the train-load Saturday for a massive rights march set to draw hundreds of thousands in defiance of America's hardline new president, Donald Trump.

More women and men! #WomensMarch we the people pic.twitter.com/x4HTpMbWL0

On the move with NARAL president @ilyseh! (Read our signs ↓↓↓) #WomensMarch #WomensMarchOnWashington pic.twitter.com/qqmxbCKbs2

Metro stations overflowed as trains packed to bursting moved cheering, clapping marchers into the city for what was expected to be a record-breaking inauguration-related protest.

Michele Phillips, a 45-year-old Canadian from New York State who took US citizenship in 2013, came to make a stand against what she calls Trump's "platform of hate and bigotry."

"I know that we can do better, we have to fight for the change we want to see," she told AFP.

According to Washington's deputy mayor Kevin Donahue, organisers have upped their initial turnout estimate from 200,000 to 500,000 people faced with the early morning flood of protesters. The city provides no official crowd counts.

Trump's defeated rival Hillary Clinton tweeted her support to the crowds massed near Washington's National Mall, preparing to march on the White House led by celebrity participants including Scarlett Johansson and Michael Moore.

Thanks for standing, speaking & marching for our values @womensmarch. Important as ever. I truly believe we're always Stronger Together.

Women made up the overwhelming majority of the people who emerged whooping and cheering from Washington's Union Station, arriving on jam-packed trains and buses.

Many carried homemade signs. "Keep your tiny hands off me," said one. "Rise, Love, Resist," read another.

The incoming tide of women in knitted pink hats flushed through a city that the day before had welcomed throngs of Trump supporters in red "Make America Great Again!" caps for the Republican's swearing-in to a four year term. Trump -- and his new administration -- were feted at balls after an inaugural speech that painted a grim vision of national decline under his Democratic predecessor Barack Obama, punctuated by the new president's vow to stop "this American carnage."

For his first full day in the world's most powerful office, Trump attended a multi-faith service at Washington National Cathedral. He was later due to visit the headquarters of the CIA, an agency he feuded with bitterly before taking office.

Powered by social media, the "Women's March on Washington" illustrates the divisions of a country whose incoming leader faces levels of public mistrust unseen in recent decades.

His first act in office -- signing an executive order aimed at freezing Obama`s signature health care law -- was a potent gesture in that direction, with more such actions expected to follow on Monday.

But he faces resistance, dramatised by the show of force by demonstrators with fresh memories of his fat-shaming a former beauty queen, sex assault allegations and a controversial stance on abortion.

The knitted "pink pussyhats" they wore were an allusion to his boasts in a leaked videotape of grabbing women`s "pussies" with impunity.

Saturday's march comes on the heels of a first day of anti-Trump protests marred by sporadic outbreaks of vandalism, with windows smashed downtown and more than 200 people arrested.

Authorities were on alert for any new flare-up of violence -- although the stated goals of the women marchers are resolutely peaceful.Jennifer Behr, a 42-year-old accessory designer, rode a packed train from Baltimore to make her voice heard.

"It's important we assert our majority and we have a large physical presence to show Trump and the Republicans that they cannot railroad our country," she said.

While Trump won 42 per cent of the women's vote, millions who did not vote for him worry that gender rights and other progress on women`s health, contraception and abortion could be chipped away.

Organisers have not specifically used the term "anti-Trump" to describe their efforts, but the message is clear.

Bringing together "people of all genders, ages, races, cultures, political affiliations and backgrounds," they say the protest seeks to secure immigrant rights and access to abortion, among other demands -- things which Trump`s critics accuse him of wanting to curb.

Dozens of progressive groups are supporting the event, as well as Amnesty International and Planned Parenthood, the women's health care provider that is a Republican target because of the abortion services it provides.

The Women's March began with a simple Facebook post from Hawaii grandmother and retired lawyer Teresa Shook to about 40 of her friends.

Word traveled quickly, and eventually made it to the pro-Clinton Facebook group Pantsuit Nation, which has nearly four million members.

Some 300 sister marches are being held across the country, from New York to Seattle, as well as in cities around the world.

One of the largest was in London, where tens of thousands of women, men and children marched through the city center chanting "Dump Trump" and waving banners "Our Rights Are Not Up For Grabs - Neither Are We."