'What the hell is going on?' How a tiny cabal galvanised Venezuela's Opposition 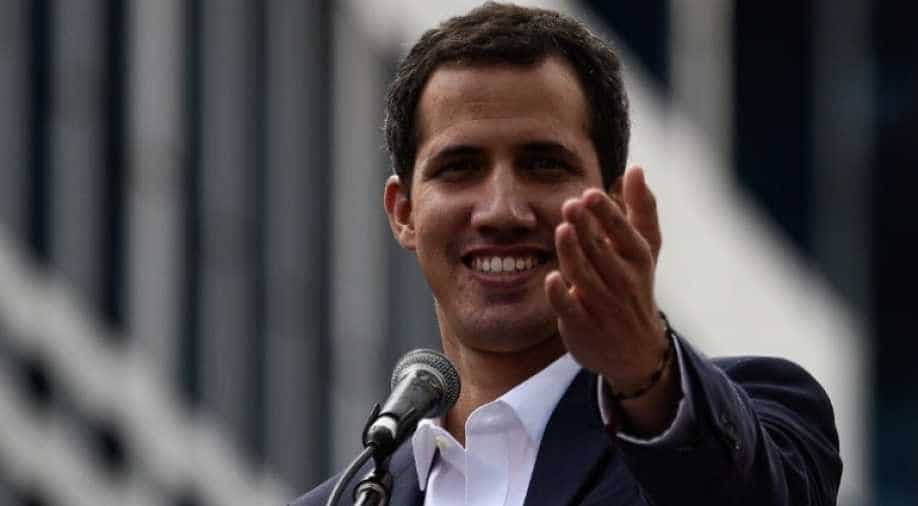 The plan was largely devised by a group of four Opposition leaders, two in exile, one under house arrest and one barred from leaving the country.

What appeared to be a carefully calibrated policy to oust Venezuelan President Nicolas Maduro was actually a big gamble by a small group of Opposition leaders acting on a hastily assembled plan, according to a Dow Jones Newswires report on Thursday.

The strategy marked a coup of sorts: This one within the country's notoriously fractious Opposition, which had been locked in debate over whether to negotiate with Maduro or take more direct action.

When Juan Guaido declared himself Venezuela's interim president on January 23 in front of a crowd of 100,000 people under a broiling sun, some leading Opposition figures had no idea he would do so, say people who work with Guaido and other top leaders. That included a few standing alongside him. A stern look of shock crossed their faces. Some quietly left the stage.

"What the hell is going on?" one member of a group of politicians wrote to the others in a WhatsApp group chat. "How come we didn't know about this."

The plan was largely devised by a group of four Opposition leaders, two in exile, one under house arrest and one barred from leaving the country. It came together only in recent weeks, as Maduro prepared to start a second six-year term on Jan 10 after elections widely seen as a sham. Maduro has denounced the ceremony as part of a US-backed coup to overthrow his government.

The act of political skulduggery paid off. The crowd reacted ecstatically to Guaido, and one nation after another recognised him within hours.

The strategy has dramatically altered Venezuela's political landscape, empowering a faction led by Guaido's Popular Will Party that has long lobbied for more direct confrontation with the Maduro regime.

Opposition leaders agreed Maduro was illegitimate and that the National Assembly, with the 35-year-old Guaidó as its newly elected head, was the country's lone democratic institution. However, many were initially against the idea of naming Guaido interim president, according to people familiar with the matter. They worried it might make eventual negotiation with Maduro impossible while deepening the misery for millions suffering from food and medicine shortages and political persecution against his rivals.

Others argued it was critical to strike quickly, and that waiting for consensus was futile.

"This was the moment to go for it," said Maria Corina Machado, one of the four behind the strategy. The timing was also irresistible. The swearing-in took place on a symbolic day in Venezuela: On January 23, 1958, students, unions and the military rose up to topple military dictator Marcos Perez Jimenez.

Guaido himself only agreed to act the day before he declared himself president, his aides said. Some politicians, including those in the traditional Democratic Action Party, the largest Opposition party, weren't told of the plan.

"We didn't want them to mess it up," said one Opposition leader who knew of the strategy.

That evening, after Guaido's move sparked an outpouring of support, Opposition politicians of all stripes, including from Democratic Action, publicly backed the move.

"We've become part of the political package facing off with the government," said Edgar Zambrano, 63, a member of Democratic Action and the vice president of the National Assembly.

Zambrano, one of the Opposition leaders who appeared surprised on stage on January 23, said the possibility of Guaido assuming the presidency had been discussed in the weeks before, but that the final decision was in the hands of the young leader because of the risks it entailed.

For now, at least, the events have electrified the Opposition's base. Guaido draws large, boisterous crowds. He has appointed ambassadors for what is, in essence, a parallel government. His team has laid out plans to bring humanitarian aid from Colombia in a tactic designed to test the resolve of Venezuelan troops loyal to Maduro.

"Only a few weeks ago, I was totally depressed," said Michael Penfold, an advisor to the Opposition who counts himself as one of the doves who has now become a hawk. "I thought nothing was ever going to get Maduro out of power. Now, I wouldn't be surprised if Maduro resigns within days."

The government, meanwhile, seems caught off guard and under siege, symbolised by the sandbags and soldiers toting machine guns that surround Maduro's Miraflores presidential palace. On frequent appearances on state TV, Maduro can be seen jogging with troops and leading them in chants of, "Traitors, never! Loyal, always!"

If the Opposition can force out Maduro, Popular Will and its head, Leopoldo Lopez, will likely take the driver's seat for any future democratic election, politicians and political analysts say. Lopez, Guaido's political mentor, is under house arrest in Caracas.

Lopez, who attended college and graduate school in the US, has long had close contact with American diplomats and is pro-free market. Guaido has laid out an economic recovery plan that calls on private companies to help rescue Venezuela's decaying oil industry, a proposal Lopez had a hand in shaping.

The perception that the hard-line faction of the Opposition has won the day could make the regime more liable to dig in, making any negotiation more unlikely. One Opposition plan posits that Maduro would negotiate his own removal, leaving in exchange for, say, safe passage to a friendly country.

With the Opposition taking action, "the Maduro team doesn't want to talk to them and doesn't trust them," said Phil Gunson, who tracks Venezuela's crisis for the International Crisis Group, a non-profit that studies conflicts. "They think they will all end up in jail or strung up from lampposts."

If Maduro holds firm, it is likely to deepen the economic hardship for millions of Venezuelans. He could even emerge stronger, able to brag that he beat back a superpower.

Zambrano, the member of Democratic Action, said that one big risk with the Opposition strategy is thinking it will all be over too soon and not planning for a long and drawn-out confrontation.

"We've committed a lot of errors in strategies, thinking the government was going to be ousted in a day," he said. "Whoever bases their politics on that is going to fail."

The road to the standoff comes after three years of setbacks for the Opposition that left them despondent, according to interviews with prominent members of several parties.

It also left four prominent leaders with the sense that the time for dramatic action was growing near. All have been targets of the regime.

Antonio Ledezma, 63, is a former Caracas mayor who spent time jailed and under house arrest before escaping to Spain.

His close ally is Maria Corina Machado, 51, an industrial engineer whose brief career as a lawmaker in the National Assembly included getting her nose broken in an attack by ruling party lawmakers, being accused of trying to assassinate Maduro and getting expelled from the legislature in 2014. She is considered among the more intrepid of Opposition leaders for holding rallies and speeches in pro-government communities, where she has been physically beaten and fired upon.

Julio Borges, 49, who lives in exile in Colombia, was the peacenik of the group. A father of quadruplets, he had long favored negotiations and elections. His position hardened toward taking action after he was threatened with jail early last year, forcing him and his family to flee.

And then there is Leopoldo López, 47, the head of Popular Will. The best-known adversary of the regime outside of Venezuela, he has maintained close ties with his Opposition colleagues despite being confined at his apartment with an ankle monitor. He was jailed after protests in 2014 on charges that rights groups, as well as his prosecutors who have since defected, called trumped up. He's a distant relative of Simón Bolívar, the liberation hero whose legacy Maduro's Socialist Party has long leaned on.

The four leaders had in the past often bitterly disagreed over how to remove Maduro, and before him, Hugo Chavez, who turned Venezuela toward socialism after he took office in 1999.

Some in the Opposition argued a tough approach led to costly blunders, including a short-lived 2002 coup that ended up strengthening Chavez's hand, and demonstrations in 2014 and 2017 that failed to force Maduro's ouster while taking the lives of nearly 200 young people.

"The Opposition was a mess," Borges said. "We had no plan. Some wanted dialogue, others not."

The government's own autocracy fueled the hardening in the Opposition. It neutered the Opposition-controlled Congress, created a parallel assembly, illegally sunk a recall referendum on Maduro and barred leading opponents from running against Maduro last year.

The four leaders saw some factors breaking their way. Some 60 countries called the presidential vote illegitimate. The geopolitical stars aligned from South America to Washington and Europe, as conservative governments opposed to Maduro took power and policymakers in Washington who had long wanted to take action on Venezuela received the go-ahead.

By the end of last year, the country was descending into anarchy. Inflation had hit 1.7 million per cent for the year. Food and medicine shortages were critical, and oil production was falling fast. Dec was marked by protests as Venezuelans tried to celebrate Christmas without pork, a holiday tradition.

By December, the four were discussing strategy every day, the Dow Jones Newswires report added.

"We spent hours every day on Zoom, talking about what to do," said Borges, referring to the video conferencing app.