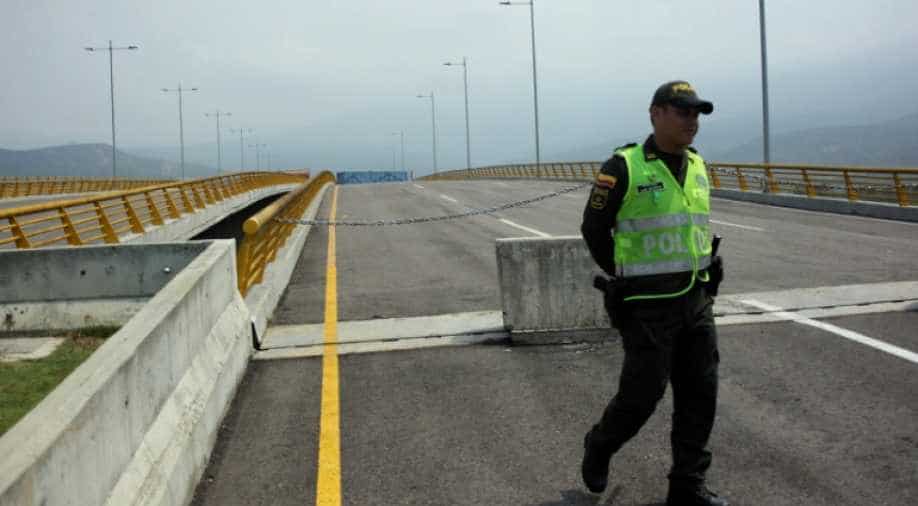 A police officer walks on the Tienditas cross-border bridge between Colombia and Venezuela, in Cucuta, Colombia. Photograph:( Reuters )

Venezuelan President Nicolas Maduro says accepting foreign aid would be the first step toward a military invasion by the United States — whom the socialist leader blames for his country's economic crisis.

Yajaira Gonzalez cries as she gathers with hundreds of other Venezuelans across the Colombian border from her homeland.

A 64-year-old with greying hair, she used to back the socialist regime in her native Venezuela — until her country's economic meltdown forced her to flee.

Now she is begging Venezuela's President Nicolas Maduro to let through foreign humanitarian aid — food, medicine and personal hygiene gear — to her desperate compatriots back home.

"It is not like you say, that we are doing OK," said Gonzalez, referring to Maduro. "Mr President, we are not OK. We are suffering."

The issue of the US and other foreign aid has become the latest focus in a struggle between Maduro and national assembly speaker Juan Guaido.

Guaido last month declared himself interim president and is now recognized as such by some 40 countries, led by the United States.

Guaido is in favour of accepting aid. But Maduro says it would be the first step toward a military invasion by the United States — whom the socialist leader blames for the economic crisis.

Gonzalez said she used to be a Chavista, or supporter of Maduro's predecessor, the late socialist firebrand Hugo Chavez — but not anymore.

Suffering from Venezuela's hyperinflation and acute shortages of basic goods, she fled from Venezuela to the city of Villa del Rosario in Colombia.

The United Nations says the crisis has prompted 2.3 million Venezuelans like her to flee their country since 2015.

When it was announced that any aid that arrives will be only for Venezuelans living inside their country, ones who had migrated into Colombia gathered at the border to see what they could get.

Meters away from where Gonzalez stands are warehouses that the Colombian government has set up to collect medicine, non-perishable food and hygiene kits financed by the US government. More such aid has been pledged from Brazil and an as yet unidentified Caribbean island.

Maduro has refused to let in the aid.

His military has blocked a border bridge over which the aid could have passed into Venezuela.

Two huge blue freight containers and the rear part of a fuel tanker truck have been placed across all three spans of the Tienditas bridge, which connects Cucuta in Colombia with Urena in Venezuela.

Around 35,000 people per day continue to use an alternative crossing: old bridge named after South American liberator Simon Bolivar.

On that ageing span, an engineer named Dajelys Lopez trudges along pushing a stroller with her newborn baby, hoping to find in Cucuta what she cannot get in Venezuela.

Her face is marked with the pain of having seen people close to her suffer in the economic crisis.

"Yesterday a friend died because he suffered a seizure and did not have medication to deal with it," Lopez said.

Colombia and Venezuela have had practically no diplomatic relations since mid-2017. Colombian President Ivan Duque is one of the most outspoken leaders against the Maduro dictatorship.

Duque has led a diplomatic offensive aiming to pressure Maduro to resign and make way for new elections.

Guaido has appealed to the Venezuelan military — a critical source of support for Maduro — to let in the aid.

The standoff will be a key test for the unity of the Venezuelan military high command, which so far has maintained its public backing for Maduro.

Venezuela's army has to choose between "a dictatorship that does not have an iota of humanity, or to side with the constitution", Guaido said in an interview on Colombian radio.

Amid the war of words, life went on as usual at the border, with police on both sides carrying out routine patrols.

Maduro has repeatedly blamed Venezuela's crisis on what he calls an "economic war" against his oil-rich country by the United States.

The US has declined to rule out military intervention.

"But I want (Maduro) to surrender the presidency so we Venezuelans can live in peace."