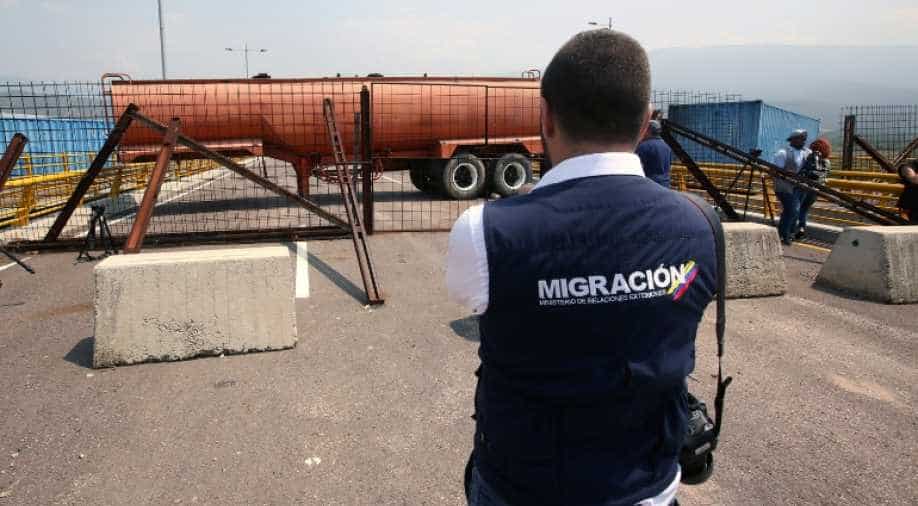 Colombian Customs agent observes the blockade of the border bridge of Tienditas between Colombia and Venezuela, in Cucuta, Colombia, February 6, 2019. Photograph:( Agencia EFE )

The humanitarian aid for Venezuela was requested by the opposition despite the refusal of the Maduro’s government, which believes it could give way to a foreign invasion.

The head of the National Constituent Assembly of Venezuela warned on Wednesday of an "irregular war" if the United States intervenes to remove its president from power.

Diosdado Cabello's statement came during his weekly television program in response to US Senator Marco Rubio, who criticised the Venezuelan government's decision to block Tienditas Bridge to Colombia that day, saying it was preventing food and life-saving medicine from reaching Venezuelans.

"I'm going to tell you, Marco Rubio, if you're making fun of us because we put some containers [on the bridge], if you come, there will be an irregular war. Prepare for what’s to come," Cabello said.

He also said the government of President Nicolas Maduro blocked the bridge because "in Venezuelan territory" it can do whatever it likes.

The Venezuelan opposition deputy Franklyn Duarte reported that the bridge was blocked by Army personnel on the presumption that through this road Venezuela would receive aid to alleviate the humanitarian emergency in the country, a crisis which the Maduro government denies.

Parliament head and self-proclaimed national president Juan Guaido said that blocking the bridge is "an absurd reaction by a regime that is not interested in the public."

"We're going to do everything possible so that this aid can come in," he added.

The humanitarian aid for Venezuela was requested by the opposition despite the refusal of the Maduro’s government, which believes it could give way to a foreign invasion.

Although it is unclear how the aid for Venezuela is going to enter, the opposition parliament has already said there will be a collection centre in the Colombian city of Cucuta, bordering Venezuela.

According to the Venezuelan parliament, collection centres in Brazil and on an unnamed island in the Caribbean will also be installed for aid coming from Venezuelan companies abroad, as well as Colombia and the US.

Despite its enormous oil reserves, Venezuela is going through a severe economic crisis that has descended into a nationwide shortage of basic foods and medicines as well as deficient public services.

The Venezuelan government frequently blames the performance of its economy on a war led by the United States together with internal and regional opposition.