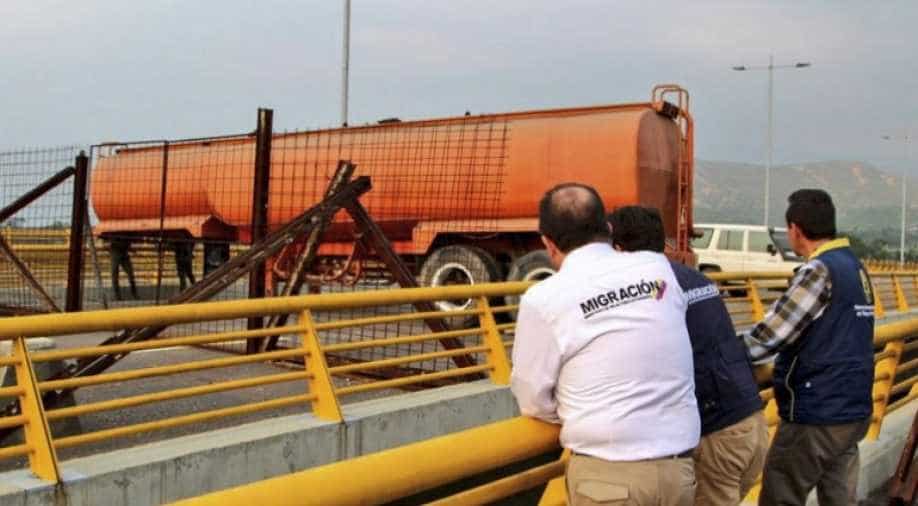 Tienditas Bridge on the border between Cucuta, Colombia, and Urena, Venezuela. Photograph:( AFP )

Guaido, who proclaimed himself acting president on January 23 -- sparking an international crisis -- claims that up to 300,000 people face death if the aid is not delivered.

Venezuelan military officers blocked a bridge on the border with Colombia ahead of an anticipated humanitarian aid shipment, as opposition leader Juan Guaido stepped up his challenge to President Nicolas Maduro's authority.

Earlier Tuesday the opposition-dominated National Assembly had warned the armed forces, which make up much of Maduro's power base, not to cross a "red line" by blocking aid.

Guaido, who proclaimed himself acting president on January 23 -- sparking an international crisis -- claims that up to 300,000 people face death if the aid is not delivered.

"You know there's a red line, you know well there's a limit, you know that medicines, food and medical supplies are that limit," lawmaker Miguel Pizarro said in a message to the military.

Maduro, though, said humanitarian aid would be the forerunner of a US-led invasion, insisting that "no one will enter, not one invading soldier."

Franklyn Duarte, an opposition lawmaker from the border state of Tachira, told AFP that troops from the armed forces were blocking the crossing.

The aid delivery was being coordinated by Guaido, who has declared himself interim president of the oil-rich country and now enjoys the backing of some 40 countries as Venezuela's legitimate leader.

Maduro, 56, has repeatedly accused the United States of fomenting a coup.

The US, which has not ruled out military intervention in crisis-wracked Venezuela, was the first to recognize him as acting president, followed by a dozen Latin American countries.

In his State of the Union address Tuesday night, President Donald Trump reaffirmed US support for Guaido, saying "we stand with the Venezuelan people in their noble quest for freedom."

Britain, France, Germany and Spain were among 20 EU nations to side with Guaido this week after Maduro ignored their demands that he announce new presidential elections by February 3

Guaido is trying to force Maduro from power, set up a transitional government and hold a new presidential poll.

He thanked his EU supporters "for supporting all Venezuelans in this struggle we undertake to rescue our nation's democracy, freedom and justice."

But key Maduro ally Russia slammed what it called interference in the oil-rich but now poor Latin American country, saying it was an attempt to "legitimize usurped power."

Turkey's President Recep Tayyip Erdogan accused the EU of trying to "topple the government by violence and ruse," while berating the US for treating Venezuela like "one of your states."

Guaido, 35, claims his legitimacy from the constitution and has been ramping up pressure on Maduro by calling his supporters out into the streets.

The next mass demonstration is due for February 12.

Guaido must still find a way to bring in the humanitarian aid given the military's loyalty to Maduro.

He accused the military on Monday of planning to divert aid being stockpiled in Colombia, Brazil and an unidentified Caribbean island, in order to distribute it through the socialist government's subsidized food program for its own supporters.

The National Assembly said the military must decide whether it is on the side of the people or "the problem."

Guaido knows he needs the armed forces on his side to dislodge Maduro. He was boosted on Saturday by the defection of a top air force general.

His fledgling alternative administration will hold talks in Washington February 14 on responding to "the largest hemispheric humanitarian crisis in modern history."

Maduro disclosed Monday that he sent Pope Francis a letter seeking help in mediating the country's crisis. The pope told journalists Tuesday that this would require agreement from both the government and the opposition.

"Getting close to both sides to enact the possibilities of dialogue. That's how diplomacy works," the pope said on the plane bringing him back from the United Arab Emirates.

Eurasia Group analysts say the humanitarian crisis "represents a lose-lose gambit for Maduro" who will either have to allow the goods to enter the country, further bolstering Guaido, or force the military to block their entry, risking a backlash in the streets.

"Venezuela doesn't have to beg to anyone," he said. "If they want to help, then end the blockade and the sanctions."

Eurasia said US oil sanctions are "set to have a broad impact" with the government facing "the prospect of running out of gasoline, which could serve as another social catalyst."

Guaido branded Maduro illegitimate over his reelection in May, which the opposition boycotted after several of its leaders were either jailed, barred or forced into exile.

The US and EU dismissed the elections as a fraud.

Maduro has flatly rejected demands for new elections, telling Spanish television he would not "cave in to pressure."

He has supported plans for a meeting of Latin American and EU states in a "Contact Group" in Montevideo on Thursday, though.

The United Nations said 40 people were killed in clashes with security forces in a week of protests last month, coinciding with Guaido's self-proclamation as acting leader. Local NGO Foro Penal said almost 1,000 people were detained between January 21 and 31.