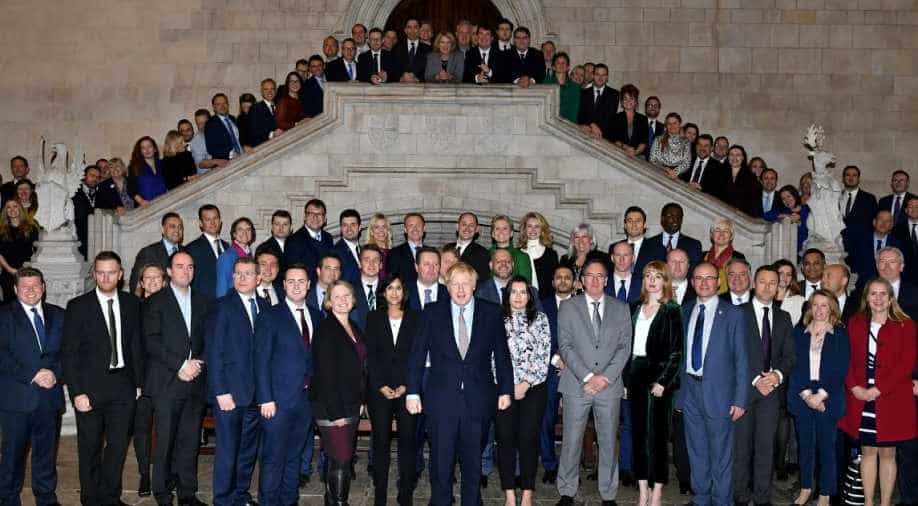 After securing a commanding majority in last week's vote, Johnson will seek to speed up approval by parliament of his withdrawal agreement with the European Union.

British Prime Minister Boris Johnson will welcome 109 new Conservative lawmakers to parliament on Monday, promising to honour his election-winning pledges to get Brexit done as soon as possible and boost funding for the state health service.

After securing a commanding majority in last week's vote, Johnson will seek to speed up approval by parliament of his withdrawal agreement with the European Union, and start ploughing money into health, education and the police.

The prime minister, who won over many traditional supporters of the main opposition Labour Party in northern and central England, has proclaimed he will lead a "people's government" and "repay the public's trust by getting Brexit done".

"This election and the new generation of MPs (members of parliament) that have resulted from Labour towns turning blue will help change our politics for the better," said a source in Johnson's Downing Street official residence.

"The PM has been very clear that we have a responsibility to deliver a better future for our country and that we must repay the public's trust by getting Brexit done."

The government will bring the Withdrawal Agreement Bill back to parliament on Friday, but it is not yet clear whether there will be a vote because it needs the agreement of the House of Commons' new speaker.

But with such a large majority, he is expected to get the bill through parliament by his deadline.

The priority is to leave the EU on January 31 and then secure a trade agreement with the bloc before the end of next year, Johnson's spokesman said.

"We plan to start the process before Christmas and we will do so in the proper constitutional way in discussion with the speaker," he said, adding that the Brexit bill would reflect the agreement made with the EU.

In a Queen's Speech on Thursday setting out his government's programme, Johnson will also promise more funds for Britain's much-loved but struggling public health service - a pledge he plans to enshrine in law.

After more than three years of debate over Brexit, Johnson wants to move quickly to try to unite a country riven by disagreements over how, when or whether Britain should leave the EU. Towns, villages and even families have been fractured.

The election saw Labour suffer its worst result since 1935 as many of its supporters who wanted to leave the EU switched to the Conservatives. The opposition party is expected to appoint a new leader by early next year.

Johnson is keen to hold on to those voters who supported the Conservatives, many for the first time, and is likely to retool his government next year to deliver his election promises.

For now, the prime minister will appoint three new ministers to fill vacant positions and keep any changes to a minimum before Britain leaves the EU on January 31.