US deputy secy of state to visit Russia, Lithuania to discuss Belarus 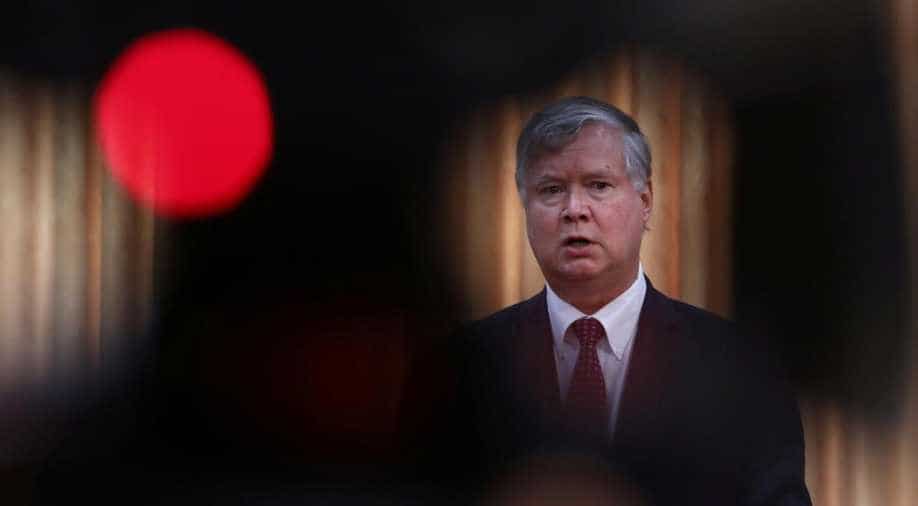 No 2 US diplomat Photograph:( Reuters )

Deputy Secretary of State Stephen Biegun's planned mission signals a greater US role in trying to settle the strife that erupted when Belarusian President Alexander Lukashenko brutally cracked down on peaceful protesters rejecting his claim of a landslide Aug. 9 election win.

The number two US diplomat will visit Russia and Lithuania soon for talks on Belarus, two sources familiar with the matter said on Friday, as Washington seeks a peaceful resolution to that country's election crisis that averts Russian intervention.

Deputy Secretary of State Stephen Biegun's planned mission signals a greater US role in trying to settle the strife that erupted when Belarusian President Alexander Lukashenko brutally cracked down on peaceful protesters rejecting his claim of a landslide Aug. 9 election win.

Asked about Biegun's planned trip, a State Department spokesman said "there is no travel to announce at this time."

One source, a former senior US official who spoke on condition of anonymity, said Biegun was expected to leave in the coming days for Moscow and the Lithuanian capital Vilnius, where Belarusian opposition candidate Sviatlana Tsikhanouskaya took refuge after Lukashenko launched his crackdown.

The United States and European Union have condemned the election as marred by irregularities. US Secretary of State Mike Pompeo on Thursday urged Lukashenko to accept international help in opening talks with the opposition and implicitly warned Russia, Belarus' massive neighbor, not to intervene.

Lukashenko has appealed to Russian President Vladimir Putin for help salvaging his 26-year rule. Belarus is bound to Russia by a mutual defense treaty and deep economic, political and cultural ties.

Putin has offered assistance, if required. Moscow on Wednesday said it saw no need to help for now, but has warned against outside involvement in Belarus and said the crisis should be settled internally.

The second source said he did not know Biegun's planned message but thought he would aim to prevent further violence in Belarus or Russian intervention.

"I would guess the administration is trying to dissuade Moscow from either intervening on its own or using its influence with Lukashenko to encourage him to have a (more) violent crackdown," said this source, also on condition of anonymity.

EU member Lithuania, which has sought backing from Washington, has been an outspoken critic of Lukashenko's crackdown on the demonstrations by tens of thousands of Belarusians in which his security forces have beaten, teargassed and arrested thousands of people, many of whom say they were tortured.

Experts say Washington seeks a larger role in a search for a negotiated resolution to the crisis. The turmoil disrupted a US effort to exploit tensions between Putin and Lukashenko, with Pompeo visiting Minsk in February for talks on normalizing diplomatic relations.

Protesters are not demanding closer ties with the West, experts noted, but a redo of the vote and respect for human rights, which Washington has a strong interest in promoting.

Moreover, the crisis gives Washington an issue on which to unite with European allies amid serious tensions over the Iran nuclear deal and US President Donald Trump's expressions of disdain for the trans-Atlantic alliance, they said.

"From the US perspective, there's a whole host of issues both in terms of human rights and democracy, but there's also a security component," said Jonathan Katz, a former US official and expert on Eastern Europe with the German Marshall Fund, a thinktank. "Belarus borders the Baltic allies and Poland."

At the same time, he said, Washington wants to avoid giving Putin an excuse to intervene militarily in Belarus as he did in 2014 in Ukraine, when Russian forces seized Crimea and backed separatists in the country's east after the ouster of a pro-Moscow government.

"There are concerns about the potential for Moscow to act militarily," said Katz. "You can't dismiss it even if you think the likelihood is not there."