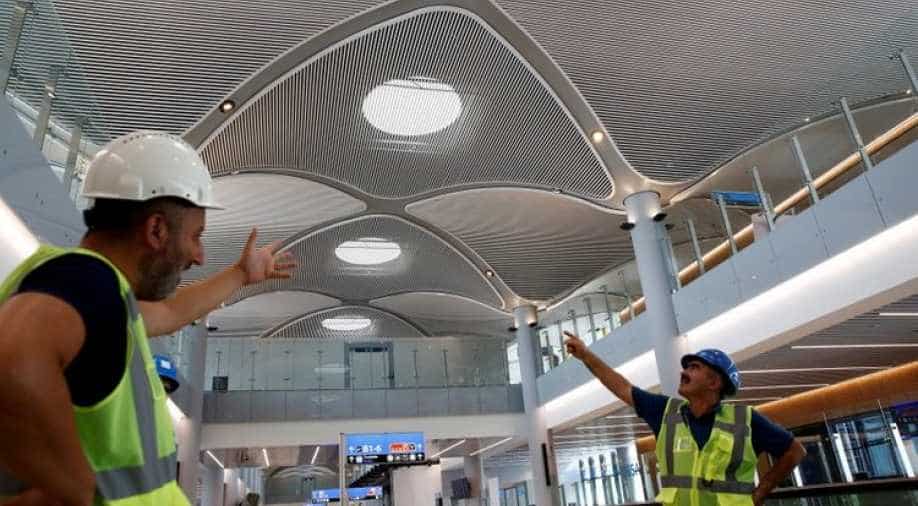 The airport, one of a number of mega-projects under Erdogan's rule, was initially scheduled to fully open on Monday but construction has been marred by delays and a workers' strike over poor conditions.

Turkish President Recep Tayyip Erdogan was on Monday due to inaugurate Istanbul's new international airport, which his government claims will become the world's largest.

The airport, one of a number of mega-projects under Erdogan's rule, was initially scheduled to fully open on Monday but construction has been marred by delays and a workers' strike over poor conditions.

Erdogan has championed the 10.5 billion euro ($12 billion) project in his bid to make Istanbul a global travel hub linking Europe, Asia and Africa and turn flag carrier Turkish Airlines into an aviation giant.

However the airport will only offer flights to five destinations until an expanded opening on December 29, from when it is expected to handle up to 90 million passengers a year, rising to 200 million when all facilities are completed in 2028.

That would be nearly double the number of passengers moving through the world's current busiest airport, Hartsfield-Jackson in the US city of Atlanta.

The first flight from the as-yet unnamed airport will be to Ankara on Thursday.

The inauguration for the new facility, which will replace Istanbul's ageing Ataturk Airport, takes place on the 95th anniversary of modern Turkey's founding by Mustafa Kemal Ataturk.

However the president, who has been accused by secularists of undermining Ataturk's legacy, has indicated he would prefer not to have the new airport named after the founder.

Many observers predict Erdogan, who often references the Ottoman Empire, will instead name it after an Ottoman-era sultan such as Abdulhamid II. Some supporters have even argued it should carry Erdogan's name.

The two-month period after Monday's "soft opening" will be used to identify "where we need to work a bit more", Kadri Samsunlu, director general of the Istanbul Grand Airport (IGA), told foreign media visiting the site on Thursday.

The "entire business" at Ataturk -- including planes and equipment -- will be moved to the new airport over a 45-hour period after the "hard opening" at the end of the year, Samsunlu added.

Authorities say a metro line will be built to link the airport, which is near the Black Sea coast on the European side of Istanbul, to the city centre 35 kilometres (22 miles) away.

Before its glitzy launch, the airport looked more like a construction site on Thursday, with dump trucks roaring past, a road being paved and workers quickly dismantling scaffolding.

When completed in 2028, it will have six runways and two terminals spread over 76 square kilometres (29 square miles), the IGA said. That would make it three times the size of Ataturk.

Turkish Airlines will take advantage of the extra space by expanding its commercial and cargo operations, a source at the company told AFP on condition of anonymity.

"Next year we will add 40 airplanes to our fleet. By 2023 we will have 450 planes and transport more then 120 million passengers a year," the source said.

The 35,000 people employed on the project have had to scramble to complete it on time.

Last month, hundreds of workers walked off the job to protest poor conditions and work-related deaths on the site.

Most were released without charge, but around 20 remain in prison.

Thirty workers have died on the site since construction began in 2015, according to the IGA. The unions say the real number is much higher.