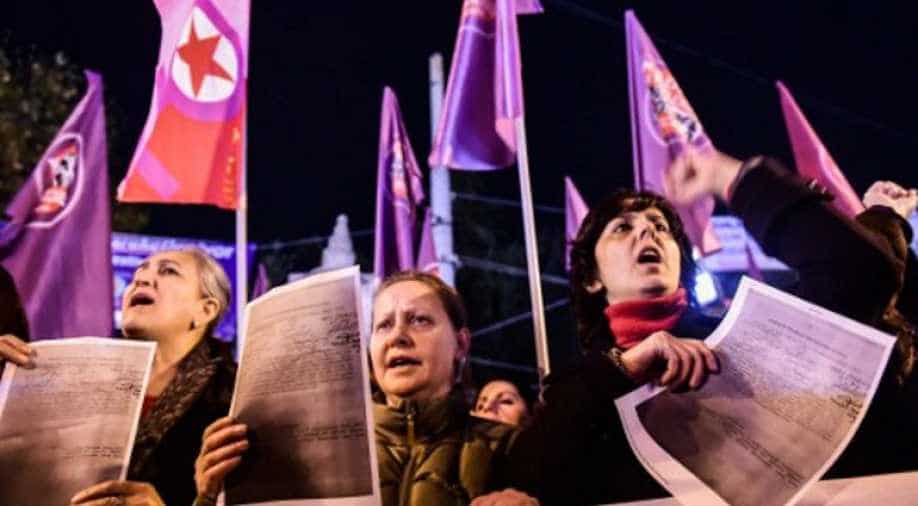 Women hold up copies of the bill, shout slogans, and wave banners with saying 'Rape cannot be legitimised' and 'AKP, take your hands off my body'. Photograph:( AFP )

Thousands of people, including women and children, marched on Saturday in Istanbul against a controversial bill that would overturn men's convictions for child sex assault if they married their victim.

"We will not shut up. We will not obey. Withdraw the bill immediately!" the around 3,000 protesters shouted amid claps and whistles as they marched to Kadikoy square on the city's Asian side.

Others waved banners emblazoned with slogans such as "#Rape cannot be legitimised" and "AKP, take your hands off my body," a reference to the ruling party of President Recep Tayyip Erdogan, which introduced the bill.

The opposition, celebrities, and even an association whose deputy chairman is Erdogan's daughter have expressed alarm over the move

The opposition, celebrities, and even an association whose deputy chairman is Erdogan's daughter have expressed alarm over the move.

But the government insists the legislation was aimed at dealing with the widespread custom of child marriages and the criticism was a crude distortion of its aim.

Justice Minister Bekir Bozdag on Saturday moved to reassure opponents that the bill would not pardon rapists.

"The bill will certainly not bring amnesty to rapists.... This is a step taken to solve a problem in some parts of our country," he told a NATO meeting in Istanbul.

After the controversy, Prime Minister Binali Yildirim late Friday ordered his ruling Justice and Development Party (AKP) to hold talks with the opposition in parliament on the planned measures.

'Women will take to streets'

The measures were approved in an initial parliamentary reading on Thursday and will be voted on again in a second debate in the coming days. Critics have said the government is encouraging the rape of minors.

"We will not allow the AKP to acquit and set free rapists in this country," one of the women protesters who gave her name as Ruya told AFP.

"Women will resist and take to the streets until this law and similar other laws are withdrawn."

Another protester, a middle-aged man named Ugur, was at the protest with his 14-year-old daughter.

"I am concerned about my daughter's future," Ugur told AFP. "AKP is passing any law they want in the parliament."

The AKP enjoys a comfortable majority in the 550-seat parliament, holding 317 seats.

"That's the maximum we can do. To protest," he said.

If passed, the law would allow the release from prison of men guilty of assaulting a minor if the act was committed without "force, threat, or any other restriction on consent" and if the aggressor "marries the victim".

The legal age of consent in Turkey is 18 but child marriage is widespread, especially in the southeast.

"In which century are we are living? Forgive me but we are talking about rape while other issues should be up for discussion," he said.

"A country cannot advance with more bridges or roads. We are against the bill and we will not remain silent."

'Violence against children a crime'

The UN children's fund said Saturday it was "deeply concerned" over the bill.

"These abject forms of violence against children are crimes which should be punished as such, and in all cases the best interest of the child should prevail," spokesman Christophe Boulierac told AFP.

The latest controversy comes after Turkey's constitutional court in July annulled a criminal code provision punishing as "sexual abuse" all sexual acts involving children under the age of 15.

Defenders of that law argued it made a distinction between cases of sexual acts involving a young teenager as opposed to a much younger child.

The bill comes amid widespread concern at what the UN rapporteur on freedom of expression on Friday described as a "grim" situation in Turkey following an attempted coup in July.

Since a rogue military faction tried to oust President Erdogan from power, over 100,000 people within the judiciary, media, military and civil service have been arrested, suspended or sacked.