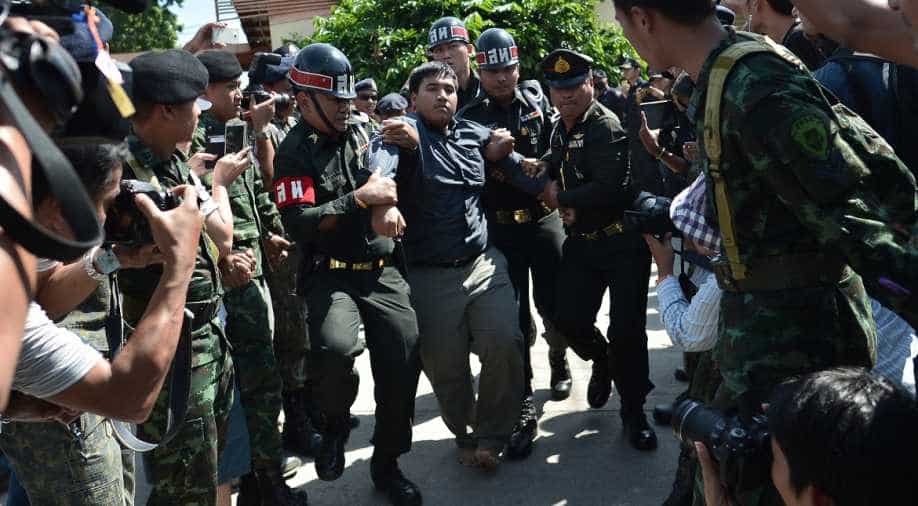 Since the military's takeover, Thailand has undergone a major rights crackdown, with scores of activists jailed. (Representative image) Photograph:( Getty )

Follow Us
A Thai journalist and four activists were charged today under a draconian law banning criticism of the junta's new constitution which will be voted on in a referendum next month.

Taweesak Kerdpoka, a reporter with the news outlet Prachatai, was arrested on Sunday morning along with four members of the New Democracy Movement, one of the few activist groups that dared to challenge the military since generals seized power two years ago.

He did not elaborate on how their actions had broken the law, but the men face up to ten years in prison if convicted.

The clause outlaws critical discussion of the junta's new draft constitution, which if passed will become Thailand's 20th in less than a century.

Prachatai editor Chiranuch Premchaiporn said Taweesak was travelling in the same car as the activists to report on their activities.

Police stopped the car and found documents that they deemed were in breach the referendum law.

"He is a reporter that covers human and environmental rights," she said. "He was just doing his job."

Thais will vote on the the new charter on August 7, the first return to the ballot box since the 2014 coup.

The junta says the document is the antidote to Thailand's caustic political divide.

But politicians on both sides of the divide have dismissed it as an attempt to further entrench the military's hold on power through an appointed senate.

The activists could be heard shouting: "Voting 'no' is our right, it is not against the law".

Prachatai has a history of investigative journalism that frequently riles Bangkok's ultra-nationalist establishment.

Last year its editor Chiranuch lost an appeal against a conviction under the country's notorious royal defamation law for failing to speedily remove reader comments deemed critical of the monarchy.

Since the military's takeover Thailand has undergone a major rights crackdown, with scores of activists jailed and skyrocketing lese majeste (offence against the dignity of a reigning sovereign or against a state) convictions.

The kingdom has been handicapped by more than a decade of political deadlock and violence including two military coups.