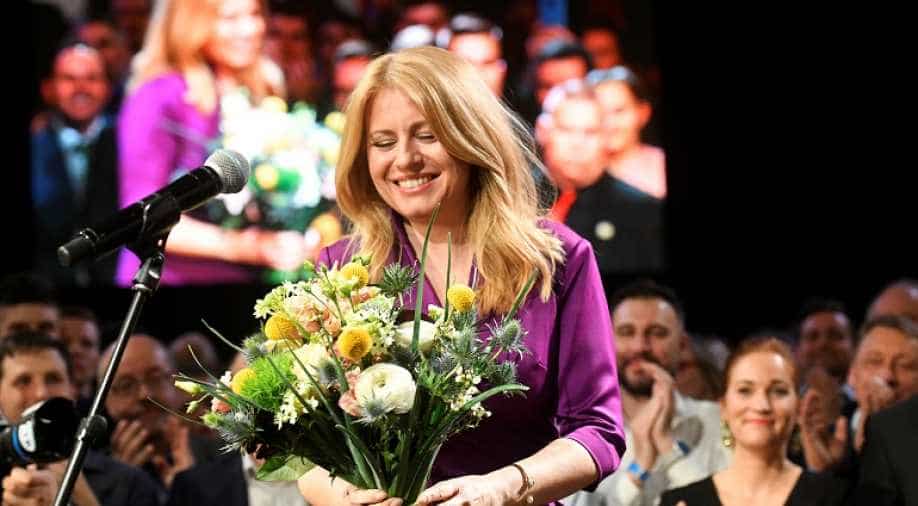 Corruption and change have been the main themes ahead of the run-off vote, which takes place a year after journalist Jan Kuciak, who investigated high-profile fraud cases, and his fiancée were murdered at their home

Corruption and change have been the main themes ahead of the run-off vote, which takes place a year after journalist Jan Kuciak, who investigated high-profile fraud cases, and his fiancée were murdered at their home.

Caputova, a pro-EU political novice who would be Slovakia's first female president, won the election's first round two weeks ago with 40.6 percent of the vote, ahead of European Commissioner Maros Sefcovic on 18.7 percent.

Sefcovic, a respected diplomat who is also pro-EU, is backed by the ruling party Smer, the largest grouping in parliament that has dominated Slovak politics since 2006.

Caputova campaigned to end what she calls the capture of the state "by people pulling strings from behind", a message that opinion polls show resonates with younger, educated voters.

She has been endorsed by opposition parties and a junior party in the ruling coalition that represents the ethnic Hungarian minority, as well as outgoing President Andrej Kiska.

"I don't take my victory as a given. I expect a narrower result than two weeks ago," Caputova said after casting her vote in her hometown of Pezinok.

Sefcovic, who voted in Bratislava, said he hoped for a high turnout that would give the new president a strong mandate.

"Slovakia needs reconciliation and peace because divisions in the society take away our energy from important issues," he said.

At one polling station in the capital, voter Zuzana Behrikova said she had been convinced by Caputova's activist background.

"She knows what it is like to face injustice and she has always had the back of those who fought against the oligarchs," Behrikova said, accompanied by her two young daughters.

Five people have been charged with the murders of Kuciak and his fiancée Martina Kusnirova, including businessman Marian Kocner, who was investigated by Kuciak, and who has become a symbol of perceived impunity after more than a decade of rule by Smer. Kocner denies any wrongdoing.

The killings ignited the biggest protests in Slovakia's post-communist history.

Caputova waged a 14-year fight with a company Kocner represented that wanted to build an illegal landfill in her home town. She eventually won the case, earning her the nickname "Slovakia's Erin Brockovich", after the American environmentalist portrayed by Julia Roberts in a 2000 film.

An opinion poll by the Median agency, the only survey released between the first and the second round of voting, put support for Caputova at 60.5 percent. Sefcovic, who has campaigned on his experience and personal relationships with foreign leaders, held a 39.5 percent vote share, according to the poll.

Courting voters who backed anti-immigration candidates in the first round of the presidential election, Sefcovic has said he rejects the vision of an EU "where the distribution of migrants would be decided by someone other than Slovakia".

The Moscow-educated politician supported the government's opposition to mandatory migrant quotas suggested by the European Commission, where he is a vice president.

Sefcovic, who joined the Communist Party in what was then Czechoslovakia just months before communism collapsed in November 1989, has stressed his Christian beliefs in the campaign. He called Caputova's support for abortion rights and LGBT rights "ultra-liberal".