Regulators fail to set date for 737 MAX return to service 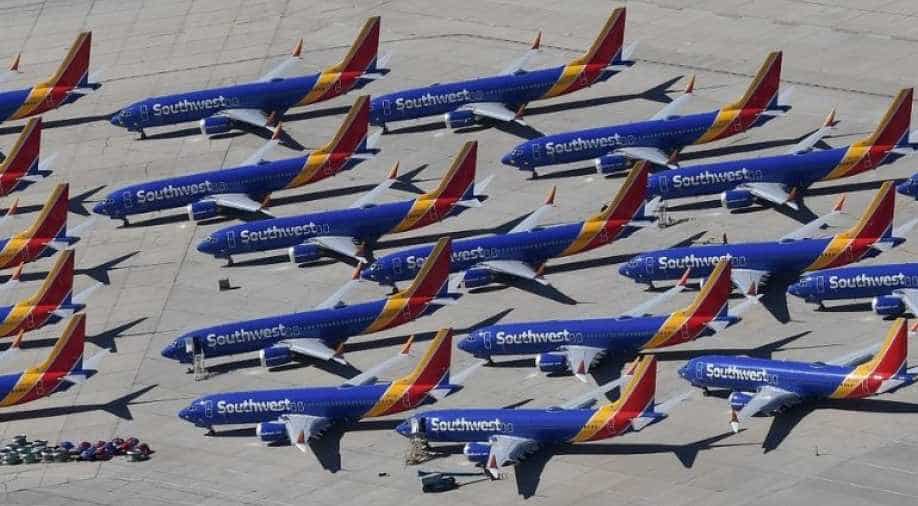 Southwest Airlines Boeing 737 MAX aircraft are parked on the tarmac after being grounded, at the Southern California Logistics Airport in Victorville, California. Photograph:( AFP )

'The only timetable is to make sure the aircraft is safe to fly,' Daniel Elwell, acting head of the US Federal Aviation Administration, said.

Civil aviation regulators from around the world failed to make a determination Thursday on when Boeing's popular 737 MAX aircraft can return to the skies after being grounded following two deadly crashes.

"The only timetable is to make sure the aircraft is safe to fly," Daniel Elwell, acting head of the US Federal Aviation Administration, said at the conclusion of the day-long meeting in Texas.

There was "enthusiastic agreement to continue the dialogue," he said, but acknowledged that "each country has to make its own decision."

"If they unground relatively close to when we unground I think it would help with public confidence," Elwell said while adding that: "We can't be driven by some arbitrary timeline."

Until the 737 MAX crashes in Ethiopia in March and Indonesia in October which left a combined 346 people dead, the common practice was that air regulators would follow the assessment of the agency overseeing the model, in this case, the FAA.

On Wednesday, Elwell threw cold water on hopes of a speedy resolution, after revealing that Boeing had held off submitting a proposed software fix for review after his agency raised additional questions.

Investigators have focused on the MAX's anti-stall Maneuvering Characteristics Augmentation System in inquiries into the two deadly crashes.

Boeing last week said the MCAS update was ready for the certification process, and US airlines were hoping the planes could be back in the skies in time for part of the summer travel season.

But Elwell on Thursday said the process could take one month, two months or longer.

"It is all determined by what we find in our analysis of the application," he said on CNBC.

Once Boeing has submitted all documentation, the FAA will conduct a test flight and detailed analysis to evaluate the safety of the software.

Richard Aboulafia, an aviation analyst at Teal Group, said Boeing wants to avoid having to repeat the process.

"There's a lot at stake in terms of the first impression by the world's regulators," he told AFP.

US air carriers that operate the 737 MAX, including American Airlines, Southwest and United, have said they hope to have the planes flying again by mid-August at the latest.

But the FAA's reputation has taken a beating since the March crash and faced accusations of an overly cosy relationship with the aviation giant. Other aviation authorities now appear less likely to follow the US agency.

Michel Merluzeau of Air Insight Research said American officials could end the 737 MAX's grounding toward the end of summer, with authorities in other countries following suit "several months" later.

"We're headed for a return to service that could drag on in time," he said.

Elwell said regulators also have yet to decide on changes to pilot training once the adjustments have been approved.

The United States has differed with a number of countries on this issue, including Canada. Washington believes training on computers or tablets is sufficient for seasoned pilots but Ottawa wants to require training on flight simulators.

The European Aviation Safety Agency, Canada and Brazil are among countries saying they will conduct their own evaluations of the MCAS fix.

What China, the first country to ground the 737 MAX, will do is also an unknown given the flare-up in trade frictions with the United States.

About five dozen representatives from 33 countries accepted the FAA's invitation to attend the regulators' conference in Texas.

Elwell said the closed-door meeting involved "frank questions and a frank discussion," adding that his counterparts wanted "clarifications" on US procedures.

Regaining public trust will take time, according to opinion polls conducted by Southwest showing that many passengers are not yet ready to get back aboard a 737 MAX jet. And pilots also have qualms.

"Before the Boeing MAX's return to service, we need answers and transparency," the European Cockpit Association said Thursday in a statement.

The organization, which represents 38,000 pilots from 36 countries, said it was "deeply disturbing" that the FAA and Boeing were considering a return to service while not disclosing "the many challenging questions prompted by the MAX design philosophy."

Beyond Boeing's reputation, the 737 MAX crisis comes at a major financial cost, given that the plane represented 80 per cent of the company's order backlog as of the end of last month.

The company, which has suspended deliveries, is only paid at the moment of delivery and will have to indemnify air carriers for losses.