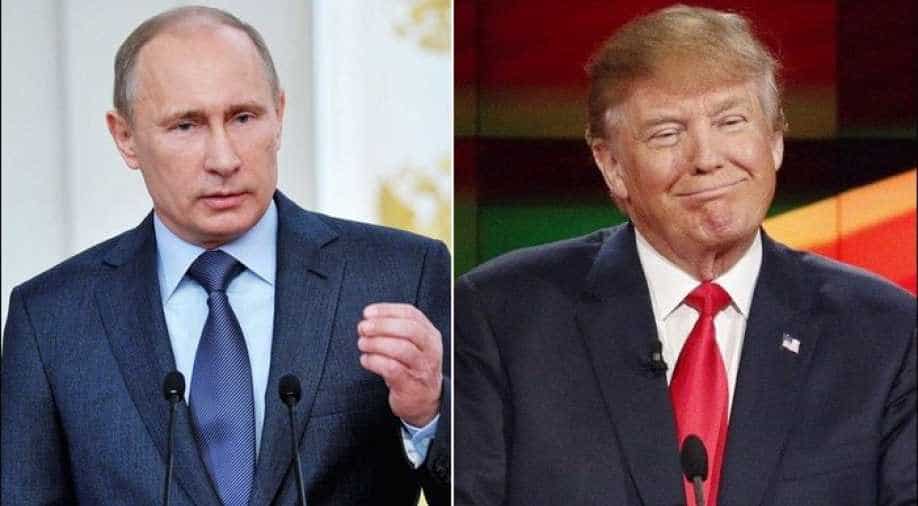 Russian President Vladimir Putin said Wednesday that Moscow could provide a recording of a controversial exchange between Foreign Minister Sergei Lavrov and US President Donald Trump that has plunged the White House into turmoil.

His comments were the first since Trump was hit with accusations that he shared secrets while meeting Lavrov in Washington, the latest crisis to hit the White house amid existing investigations into whether Trump's aides colluded with Moscow during the campaign.

Putin said he was pleased with Lavrov's visit to Washington last week but mocked the idea that Trump had shared secrets during the meeting, calling the allegations "political schizophrenia" and saying people spreading them are either "dumb" or "corrupt."

"We can see that political schizophrenia is developing in the United States," Putin told reporters after talks with Italian Prime Minister Paolo Gentiloni in the southern Russian city of Sochi.

"I cannot otherwise explain the accusations of the president that he handed Lavrov some sort of secrets," Putin added.

"If the US administration finds it possible, we are ready to provide a recording of the conversation between Lavrov and Trump to the US Congress and Senate," Putin said.

Although Putin used the Russian word for audio recording at the press conference, his foreign policy aide Yuri Ushakov said that "audio is not made" at such meetings.

"There is a recording kept by a special person present at conversations," Ushakov clarified to Russian news agencies.

Citing unnamed sources, the Washington Post reported that Trump had shared intelligence with Lavrov regarding an Islamic State group terror threat related to the use of laptop computers on airplanes.

According to sources cited in the report, that intelligence came from a US ally who had not authorised Washington to pass it on to Moscow.

The fresh US crisis sank the dollar early Wednesday as well as Hong Kong stocks amid worries that Trump's economy-boosting and tax-cutting agenda could be derailed, with some experts mentioning possible impeachment.

As news emerged that Israel was the initial source of the intel, it attempted to contain the fallout from the scandal, with Defence Minister Avigdor Lieberman saying security ties would continue to be "unprecedented" in scope.

A US administration official confirmed to AFP on condition of anonymity that the original intelligence came from Israel, which was initially reported by the New York Times.

British PM Theresa May meanwhile said Trump is free to decide what to discuss with White House visitors, while stressing that London's relationship with Washington was "the most important defence and security relationship" around the world.

Putin mocked the idea that Trump went off-script to share secrets with the Russians, saying he could issue a "reprimand" to Lavrov since the minister hadn't passed on the information.

"(Lavrov) didn't share these secrets with us -- neither with me nor with the representatives of the Russian security services. That is very bad of him," Putin said to sniggers from the audience including Lavrov himself.

The visit had already generated its share of scandal after Moscow released pictures of the closed-door Oval Office meeting showing Trump and Lavrov grinning after White House officials presumed they would not be made public.

Trump's National Security Adviser H.R. McMaster denied the president caused any security lapses while Trump himself insisted he had the "absolute right" to share "facts pertaining... to terrorism and airline flight safety" with Russia.

Adding to the confusion, Russian senator Alexei Pushkov on Wednesday tweeted that "US media were hysterical with Trump because he told us about IS plans to detonate our passenger plane."

"What else will the people generating such drivel and nonsense think of next?" he said. "They are shaking up their internal politics while using anti-Russian slogans."