Premier League: Mignolet stars for Liverpool as match with Chelsea ends in draw 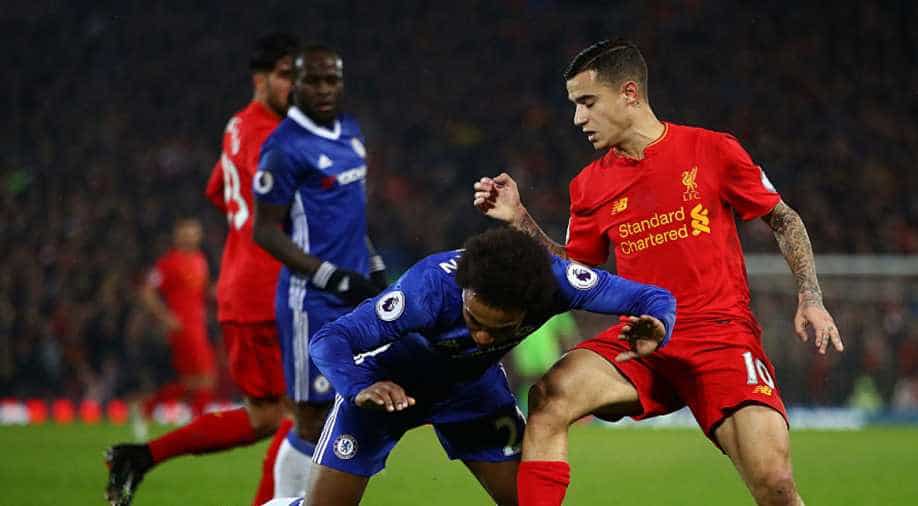 Liverpool remain 10 points off the pace in fourth place, but although they have won just one of their nine matches in 2017, they avoided losing four successive home games for the first time since 1923. Photograph:( Getty )

Simon Mignolet went from zero to hero as Liverpool prevented Chelsea from significantly extending their lead at the Premier League summit in a 1-1 draw at Anfield on Tuesday.

The Belgian goalkeeper was caught daydreaming as David Luiz put Chelsea ahead with a first-half free-kick, but after Georginio Wijnaldum equalised, his penalty save denied Diego Costa a late winner.

With Arsenal and Tottenham Hotspur dropping points, victory would have sent Chelsea 11 points clear, but instead Antonio Conte's side had to content themselves with eking their advantage up to nine points.

"We had different chances to score goals, but we must be happy with the result and the performance because it is not easy to play away at Liverpool."

Liverpool remain 10 points off the pace in fourth place, but although they have won just one of their nine matches in 2017, they avoided losing four successive home games for the first time since 1923.

While the point did little to enhance their title hopes, it was a much improved display by Jurgen Klopp`s men after successive exits from the League Cup and FA Cup against Southampton and Wolverhampton Wanderers.

"I`m not sure happy is the right word to say how I`m feeling, but I`m proud of the boys because they did outstanding things against a really good side," Klopp told BT Sport.

"I`m happy we could give this sign and create this atmosphere. It was a good performance."

Costa`s squandered 77th-minute penalty, awarded for a foul on him by Joel Matip, meant Chelsea failed to win for only the second time in 17 league games, but the title remains theirs to lose.

Klopp had trumpeted his team`s ability to beat "anyone else in this league" in the match programme and with England pair Nathaniel Clyne and Adam Lallana back from injury, his men began sharply.Their aggressive pressing prevented Chelsea from settling into a rhythm and Wijnaldum saw a rasping shot parried by visiting goalkeeper Thibaut Courtois.

Conte, clad in a tracksuit and puffer jacket that recalled former manager Jose Mourinho`s attire during Chelsea`s pivotal 2-0 win here in 2014, kicked the ball away in frustration at one point.

But in the 24th minute a combination of exquisite technique and inexcusably lax defensive attentiveness gave Chelsea the breakthrough.

As Luiz advanced to strike his free-kick, 25 yards from goal and to the left of centre, Mignolet was gesticulating to his team-mates on the edge of the area.

The Brazilian struck the ball with ferocious but controlled power and it zipped over the wall before crashing in via the left-hand post, with Mignolet rooted to the spot.

Liverpool should have levelled four minutes into the second half when Roberto Firmino hoisted the ball clear of the bar from 15 yards out after Eden Hazard had slid in to rob Clyne.

But following a sight of goal at the other end for Victor Moses, who clipped the post after charging down James Milner`s clearance, the home side levelled in the 57th minute.

Jordan Henderson`s deep cross from the right was headed back across goal by Milner, with a touch from Moses enabling Wijnaldum to direct a low header beneath Courtois`s despairing dive.

Sadio Mane made his Liverpool comeback in place of Philippe Coutinho, his Africa Cup of Nations quest with Senegal having been ended by his squandered penalty against Cameroon in the quarter-finals.

But here it was Costa who fluffed his lines from 12 yards as Mignolet dived to his right to shovel away the Chelsea striker`s poorly struck spot-kick.

Pedro Rodriguez, on for Willian, came close to sparing Costa`s blushes with a snapshot that flashed wide, while Firmino could only direct a header straight at Courtois at the opposite end.