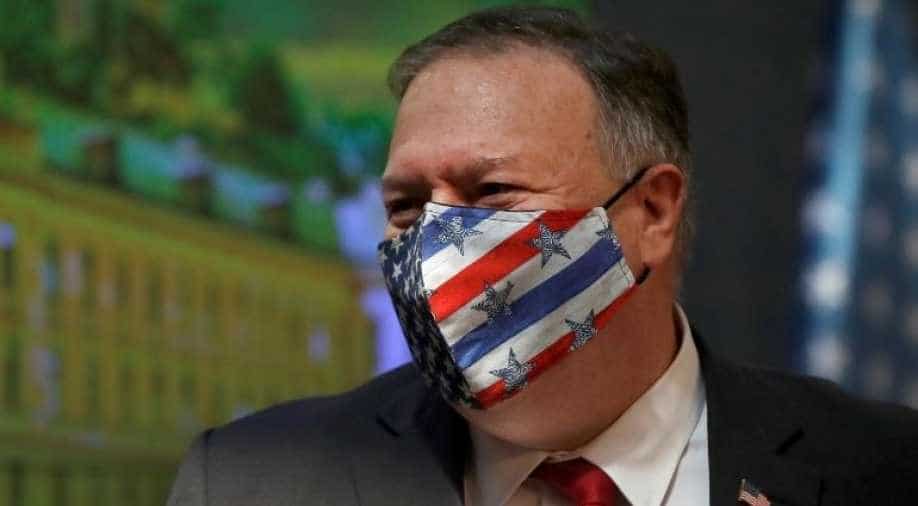 US Secretary of State Mike Pompeo wears a star-spangled mask at a joint news conference with the Czech prime minister, at the start of a four-nation tour of Europe, in Prague, Czech Republic Photograph:( Reuters )

Secretary of State Mike Pompeo visits Rome Wednesday, just a month ahead of the US elections and hot on the heels of a diplomatic breach with the Vatican, that experts see as an effort to win conservative Catholic votes.

Pompeo will not meet Pope Francis because the pontiff avoids such audiences in campaign periods, a Vatican source said.

Analysts say the pope has also been angered by Pompeo's public calls for a historic Vatican-China accord to be scrapped.

Instead, Pompeo will speak at a symposium organised by the Holy See's US embassy in the Italian capital on Wednesday, before meeting the Vatican's Secretary of State Cardinal Pietro Parolin on Thursday.

Francis has been working hard to repair ties with China, but his overtures run contrary to US President Donald Trump's efforts to push a religious freedom theme against the Communist country in his campaign for a second term.

Pompeo, an evangelical Christian, went on the offensive earlier this month, calling a Sino-Vatican 2018 agreement on appointing bishops, which is up for renewal, a risk to the church's "moral authority" given Beijing's human rights record.

Powerful cardinal Oscar Maradiaga said the US intervention was unwelcome, and clearly linked to the election campaign.

"They're looking for Donald Trump to get elected, and everything is based on that logic. In this sense, I don't think they're acting in the interests of Americans," he said in an interview with the Repubblica daily on the eve of Pompeo's visit.

Francis's opening towards China had particularly angered the "anti-Francis" network close to the US president, he said, led by Archbishop Carlo Maria Vigano, the Vatican's former envoy to the US, and Steve Bannon, Trump's former advisor.

Massimo Faggioli, a theologian at the Villanova Catholic University in the US, said there was a concerted effort under way to "turn a certain anti-Francis and anti-Vatican sentiment, which has become more visible in recent years, into votes for Trump".

"Vatican diplomacy is being used for propaganda," he said.

The US accuses Huawei of being a tool for Chinese espionage.

Italy insists its Golden Power law — which allows the government to impose conditions, restrictions or a ban on foreign investment in strategic industries — protects it from risk.

Rome became the first G7 country to sign up to the plan last year, a move sharply criticised by those who fear the investment scheme will allow key trade secrets and technologies to slip into Beijing's hands.