'Vatican endangers its moral authority': Pompeo on deal with China 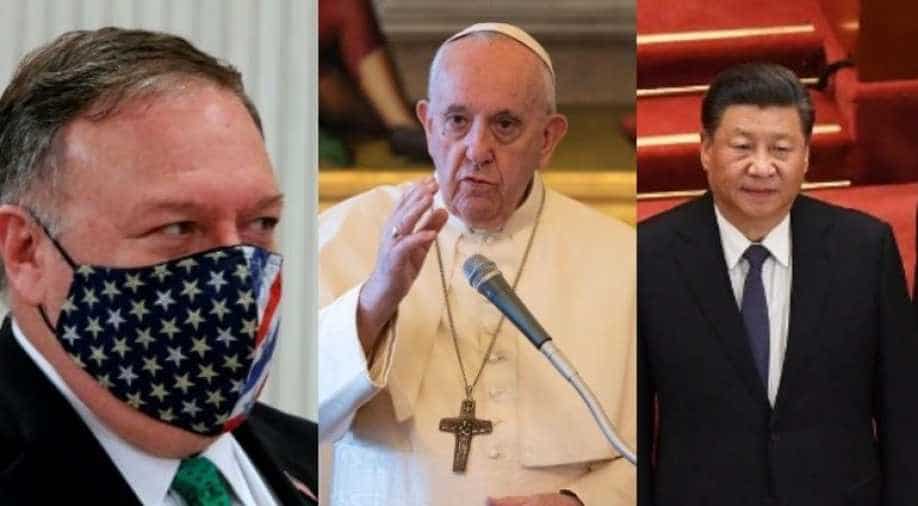 The Chinese foreign ministry said it was "willing to keep close contact with the Vatican side" while adding that it would like to "push forward the implementation of the agreement and push forward the process of improving ties."

After highlighting that "the Holy See reached an agreement with the Chinese Communist Party, hoping to help China's Catholics", US secretary of state Mike Pompeo insisted in an article that the "human rights situation in China has deteriorated severely under the autocratic rule of Xi Jinping, especially for religious believers."

"It’s clear that the Sino-Vatican agreement has not shielded Catholics from the Party’s depredations, to say nothing of the Party’s horrific treatment of Christians, Tibetan Buddhists, Falun Gong devotees, and other religious believers," the US secretary of state Mike Pompeo said in an article on First Things First.

On Wednesday, Pompeo is set to fly to Rome for meetings with the Italian government and Vatican officials. The US has been pressuring the Vatican amid reports of newel of a deal over appointment of Catholic bishops in China.

According to the Reuters news agency, Pope Francis has signed off on the two-year extension of the original pact that took effect in 2018, with the Chinese foreign ministry stating that  "the two sides will continue to maintain close communication and consultation and improve bilateral relations."

"In recent years, with the joint efforts from both sides, China-Vatican relationship has been improving gradually. The interim agreement for the appointment of bishops is an important outcome. In the past two years, the agreement has been successfully carried out," Chinese foreign ministry spokesman Wang Wenbin said.

The Chinese foreign ministry said it was "willing to keep close contact with the Vatican side" while adding that it would like to "push forward the implementation of the agreement and push forward the process of improving ties."

However, Pompeo had slammed China on Twitter, asserting that "the CCP’s abuse of the faithful has only gotten worse. The Vatican endangers its moral authority, should it renew the deal."

Meanwhile, Taiwan said that the Vatican has asked the country not to worry about the extension of the deal between the Vatican and China on the appointment of bishops as it was a "religious matter" and not diplomatic in nature.

According to the China-Vatican deal in 2018, the pope has the final say on the appointment of bishops and if Chin agrees then it will be extended without any changes.